Atomic Layer Deposition (ALD) is a referred as the surface controlled process for depositing thin films onto any substrate. During the process, number of chemicals are made to react with the surface of a material through a series of steps .The reaction results in creating thin film on the surface of substrate which is used for products such as displays, data storage devices and small electronic component where the thickness of the film is absolutely imperative. Using ALD, a depositing layer can be created in a controlled manner depending upon the material or product. Over the last few years, there has been considerable research by industry experts that has been going on in the field of nanotechnology as well as microelectronics.

The atomic layer deposition market is anticipated to record a CAGR of around 17.55% over the forecast period. The market is segmented by product type into metal ALD, aluminum oxide ALD, plasma enhanced ALD, catalytic ALD and others; by type into precursor type, material type, film type and others; by application into semiconductors & electronics (solar panels, display panels, fuel cells, thermoelectric materials) medical equipment, research & development facilities and others.  Semiconductors segment is projected to capture the largest market share owing to its wide application in electric circuit, electronics, microprocessors and transistors. CLICK TO DOWNLOAD FREE SAMPLE 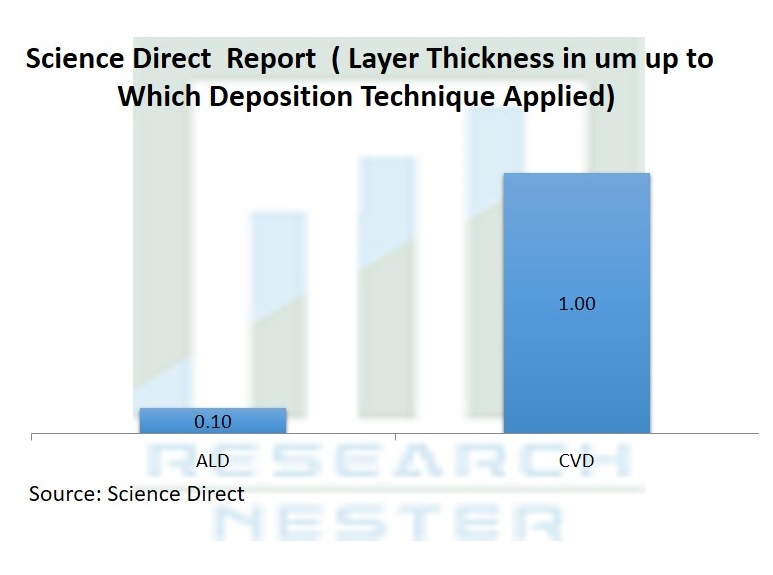 The new technologies such as 3D NAND are being developed with the growing demand for NAND storage. 3D NAND provides higher storage capacity due to multi storeyed stacking of layers of memory structures. Therefore, ALD systems helps in manufacturing 3D NAND for deposition of several controlled and precise layers on the substrate to offer a stacked structure and thereby, increasing its storage capacity. Hence, ALD is used to create di-electric films for 3D NAND systems. Furthermore, increasing demand for NAND storage is expected to drive the ALD market growth over the forecast period.

Due to their excellent output and fastest surface reaction rate, Plasma Enhanced-ALD (PEALD) is expected to be the fastest growing product type. ALD is a surface sensitive deposition process. PEALD increases the modification of the surface by plasma exposure that changes nucleation. PEALD films are ultra-slim films with an extraordinary flatness and uniformity. The leading companies globally, are focused mainly on delivering new, higher-quality, high-performance dielectric materials. Owing to its high efficiency of storing conformal layers even for complicated semiconductor components, the market is expected to grow substantially over the forecast period. Atomic layers deposition is a critical process in the production of semiconductor devices and play a major role  for nanomaterial synthesis. This method for the production of thin conformal films is regarded as one of the significant deposits methods. The demand in connection with the advent of nanoscience for complex and miniaturized components is projected to boost the ALD market.

Due to high cost of ALD system, the vendors in the market providing ALD systems have also reduced their investments in technology. This had led the semiconductor manufacturers to utilize its substitutes like CVD systems with lower costs compared to ALD systems. Further, high initial and operational cost of ALD is also expected to restrain the growth of atomic layer deposition market during the forecast period.

Based on regional analysis, the ALD market is segmented into five major regions including North America, Europe, Asia Pacific, Latin America and Middle East & Africa region. Asia Pacific is anticipated to capture the largest market share in the atomic layer deposition market owing to increasing demand from end-use businesses such as semiconductors, electronics, medical equipment industry, and solar sector. With the availability of advanced technologies and rising research & development, Asia Pacific region is expected to hold a significant revenue share by 2027.

The atomic layer deposition market is further classified on the basis of region as follows: