The global expanded hemodialysis therapy market is estimated to garner a large revenue by recording a CAGR of ~6% over the forecast period, i.e., 2022 – 2030. The growth of the market can be attributed to the increasing prevalence of hypertension and diabetes, growing number of patients of end-stage renal disease (ESRD), and rising technological advancements associated with developing innovative therapies. According to the International Diabetes Foundation, in 2020, about 463 million adults aged between 20 to 79 years were living with diabetes, the population of which is calculated to rise up to 700 million by 2045. Along with these, escalating number of dialysis centers and rise in preference for expanded hemodialysis therapy among patients are also projected to drive market growth in the near future. Furthermore, growing shortage of organ donors and emerging markets in developing regions are expected to offer ample growth opportunities to the market in the upcoming years. CLICK TO DOWNLOAD SAMPLE REPORT 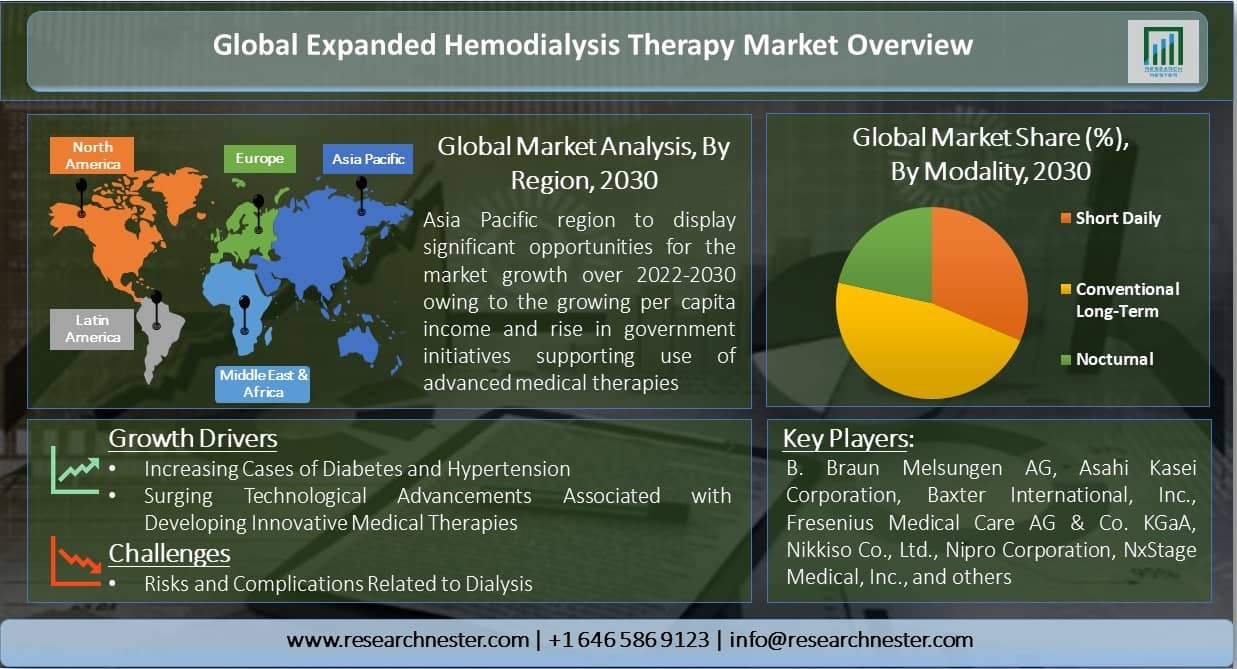 The market is segmented by modality into short daily, conventional long-term, and nocturnal, out of which, the conventional long-term segment is anticipated to hold the largest share in the global expanded hemodialysis therapy market on account of the high acceptance of expanded hemodialysis therapy among patients suffering from chronic kidney disease and ESRD. In addition, growing focus of prominent manufacturers on developing advanced dialysis equipment is also predicted to boost the growth of the market segment by the end of 2030. Moreover, on the basis of end user, the segment for independent dialysis is projected to occupy the largest share over the forecast period owing to the growing number of dialysis centers across the globe and rising availability of skilled healthcare professionals in dialysis centers.

On the basis of geographical analysis, the global expanded hemodialysis therapy market is segmented into five major regions including North America, Europe, Asia Pacific, Latin America and the Middle East & Africa. The market in the Asia Pacific is estimated to witness noteworthy growth over the forecast period on the back of rising per capita income, increasing government initiatives supporting the usage of advanced medical therapies and significant improvements in healthcare infrastructure. Apart from these, growing geriatric population is also assessed to drive market growth in the region. Additionally, the market in North America is projected to grab the largest market share during the forecast period owing to the high healthcare spending, increasing occurrence of chronic kidney diseases and strong presence of market players in the region. As per the United States Centers for Disease Control and Prevention, more than 1 in 7, that is 37 million people or 15 percent of the country’s total population is estimated to have chronic kidney disease.

The global expanded hemodialysis therapy market is further classified on the basis of region as follows:

What are the major factors driving the growth of the expanded hemodialysis therapy market?

The major growth drivers for the market are growing prevalence of diabetes and hypertension and increasing technological advancements to develop innovative therapies.

What would be the CAGR of expanded hemodialysis therapy market over the forecast period?

What are the challenges affecting the expanded hemodialysis therapy market growth?

Complications and risks associated with dialysis is estimated to hamper the market growth.

Which region will provide more business opportunities for growth of expanded hemodialysis therapy market in future?

Asia Pacific will provide more business opportunities for market growth owing to the rising per capita income and significant improvements in healthcare infrastructure in the region.

Who are the major players dominating the expanded hemodialysis therapy market?

What are the segments in the expanded hemodialysis therapy market?

The market is segmented by product, modality, end user, and by region.

Which segment captures the largest market size in the end user segment in the expanded hemodialysis therapy market?

The independent dialysis segment is anticipated to hold largest market size and is estimated to grow at a notable CAGR over the forecast period and display significant growth opportunities.