Dodecanedioic Acid Market Analysis by Process (Chemical Process, and Biological Process); by Raw Materials (Butadiene, Paraffin Wax, and Others); by Purity (99%, 98%, and Others); and by Application (Resin, Powder Coatings, Adhesives, Lubricants, and Others) – Global Supply & Demand Analysis & Opportunity Outlook 2022-2031

The global dodecanedioic acid market is estimated to garner a revenue of ~USD 1 billion by the end of 2031 by growing at a CAGR of ~5% over the forecast period, i.e., 2022 – 2031. Further, the market generated a revenue of ~USD 530 billion in the year 2021. The primary factor of the dodecanedioic market growth is the boom in manufacturing industry. In the latest reports, it was estimated that the manufacturing industry of the United States amounted to be approximately USD 6 trillion in 2022. 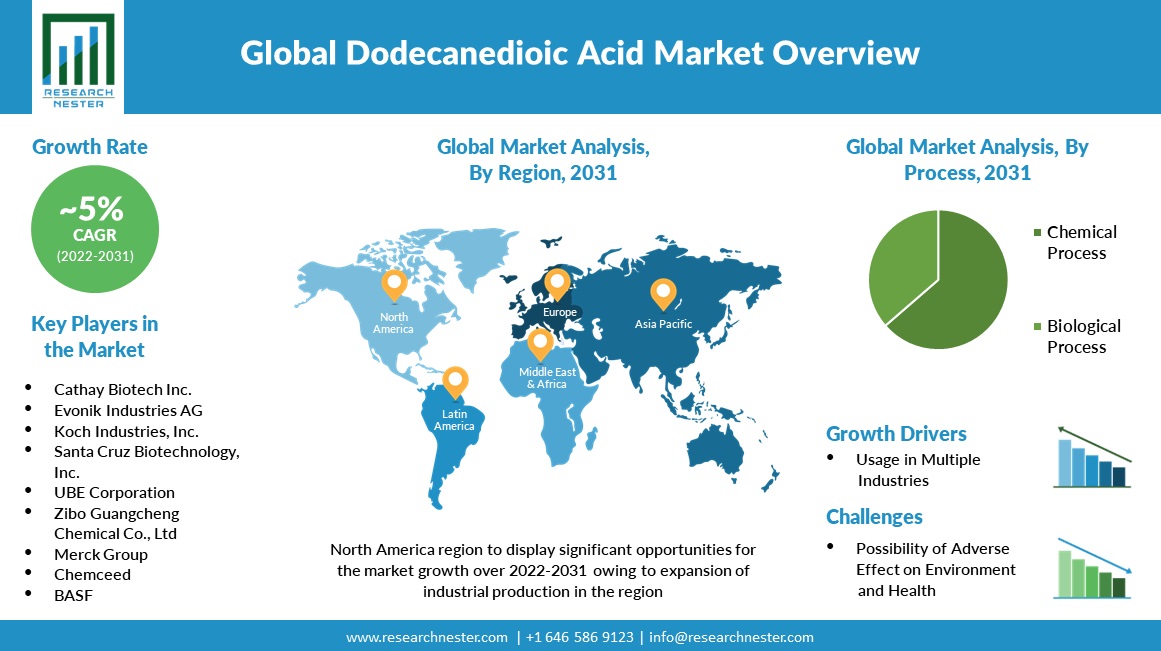 Dodecanedioic acid is being highly utilized in the manufacturing of cosmetics, coatings, lubricants, fragrances, tooth brushes, adhesives, lubricants, and pharmaceuticals among others, and growing demand for manufacturing resin is anticipated to influence the market in the positive way. Thus, the increase in number of manufacturing businesses across the world is expected to bring lucrative opportunities for the key players for global dodecanedioic acid market in the assessment period. In 2022, it was projected that the number of businesses in the manufacturing industry of the United States counted to be 638,590 in total.

Dodecanedioic acid, also known as DDDA is a dicarboxylic acid. This acid utilized in top-grade antiseptics, surfactant, antiseptics, painting materials, corrosion inhibitor, and engineering polymers including nylon 612. The material is utilized in the manufacturing corrosion inhibitors that are widely used chemical, pulp & paper, and water treatment, among other industrial facilities. 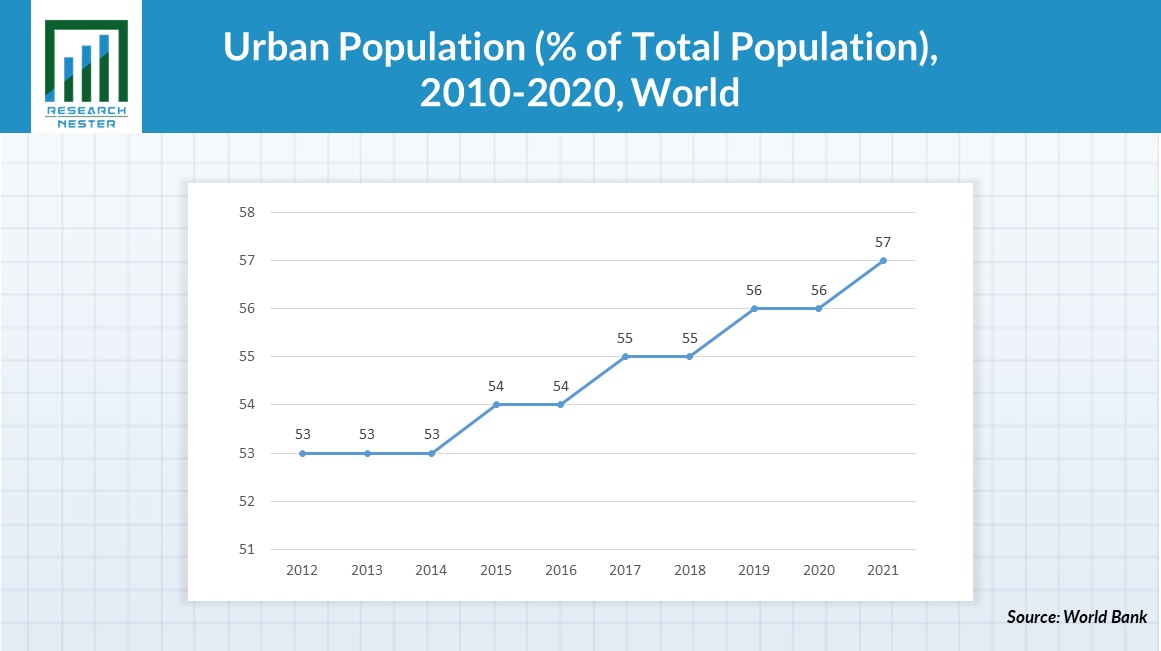 The dodecanedioic acid market is segmented and analyzed for demand and supply by application into resin, powder coatings, adhesives, lubricants, and others. Out of these, the powder coatings segment is anticipated to garner the largest dodecanedioic market share by 2031, owing to large market volume.  The latest reports stated that the market volume of powder coatings was almost 3 million tons worldwide. Further, it is forecasted that the number is surpass 5 million by 2025.

Regionally, the global dodecanedioic acid market is studied into five major regions including North America, Europe, Asia Pacific, Latin America and Middle East & Africa region. Amongst these markets, the market in Asia Pacific is projected to hold the largest market share by the end of 2031. The rising support from the governments in the region to expand the chemical industry is one of the factors that is expected to swell the dodecanedioic acid market. In India, around USD 26 million was allocated by the government to the Department of Chemicals and Petrochemicals under the Union Budget 2022-23. Another growth factor for the expansion of the dodecanedioic acid is the increased industrial production rate in the region. It was estimated that the industrial production rate in China rose with a 4% rate from July 2020 to July 2022. 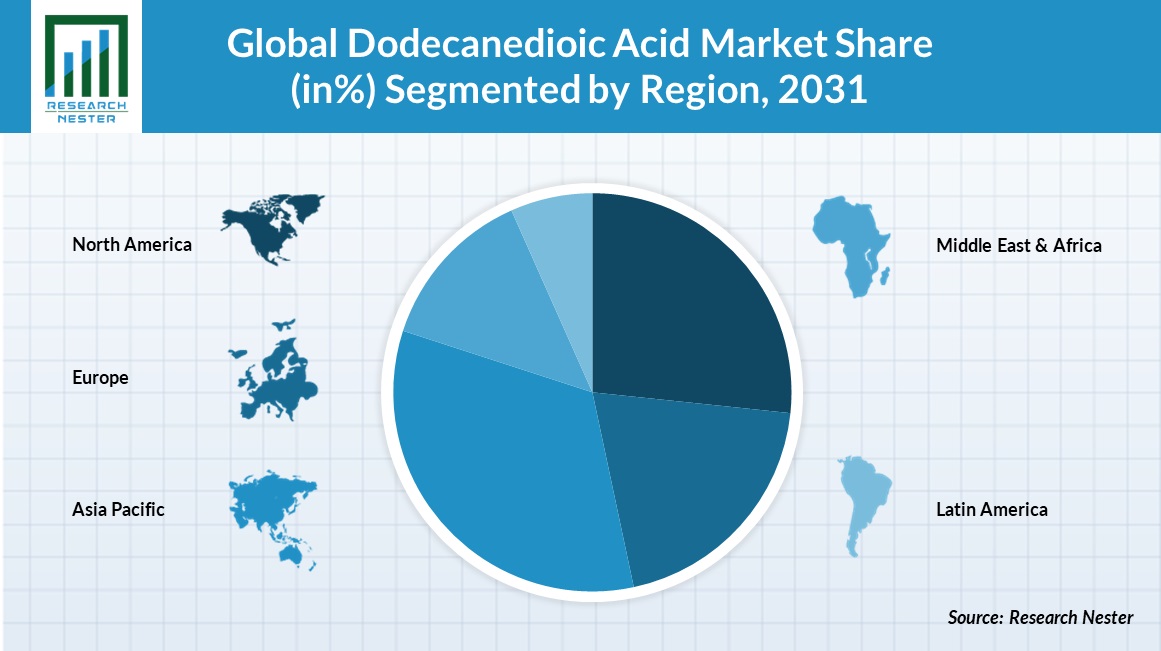 The global dodecanedioic acid market is further classified on the basis of region as follows:

Our in-depth analysis of the global dodecanedioic acid market includes the following segments:

What are the major factors driving the growth of the dodecanedioic acid market?

The expansion of manufacturing industry along with the high utilization of the dodecanedioic acid in other end-use industries are some of the factors that are anticipate to propel the market growth.

What would be the CAGR of dodecanedioic acid market over the forecast period?

What are the challenges affecting the dodecanedioic acid market growth?

The strict government regulations coupled with the toxic in nature and harmful for human population along with the rising awareness about environmental protection are some of the factors that are expected to hamper the market growth.

Which region will provide more business opportunities for growth of dodecanedioic acid market in future?

Who are the major players dominating the dodecanedioic acid market?

What are the segments in the dodecanedioic acid market?

The market is segmented by process, raw material, purity, application, and by region.

Which segment captures the largest market size in application in the dodecanedioic acid market?

The powder coatings segment is anticipated to garner the largest market size by the end of 2031 and display significant growth opportunities.