Further, China, India and Australia are some of the prominent countries that are driving the growth of the Asia Pacific docking station USB port market, where China accounted for the largest market share of 36.75% in the year 2018. Increasing demand for docking station USB port by the consumers for commercial applications such as in airports, railways, resorts and hotels for use in charging of smartphones and tablets, coupled with the growth in the wireless connectivity devices as well as for concepts of Bring-Your-Own-Device (BYOD) and Carry-Your-Own-Device (CYOD) and several other factors, which include rapid urbanization, increasing awareness for technology and others are some of the factors anticipated to drive the growth of the market in Asia Pacific region.CLICK TO DOWNLOAD SAMPLE REPORT 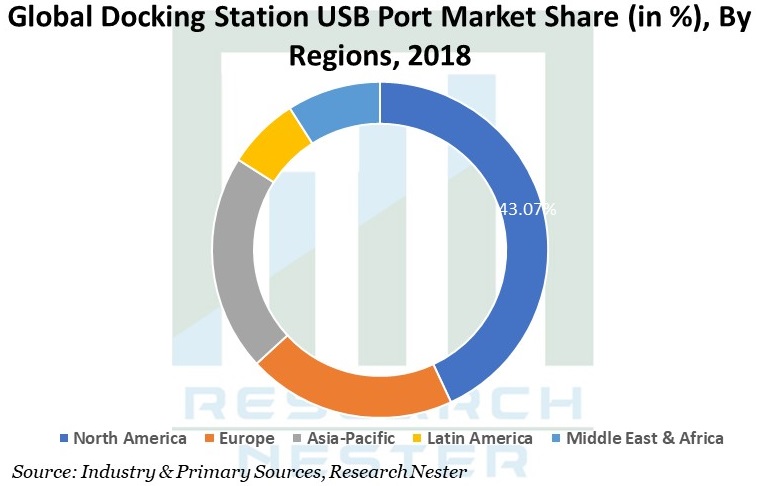 The global docking station USB port market has been segmented on the basis of USB type into USB 1.0, USB 2.0 and USB 3.0. The USB 3.0 segment with 68.55% share in the year 2018, occupies the largest market of docking station USB port across the globe. Additionally, the USB 3.0 segment is anticipated to cross a value of USD 7905.5 million by the end of 2027 by registering a CAGR of 3.46% over the forecast period. Further, the USB 2.0 segment is estimated to gain an incremental $ opportunity of USD 48.8 million in the year 2027 as compared to the previous year. 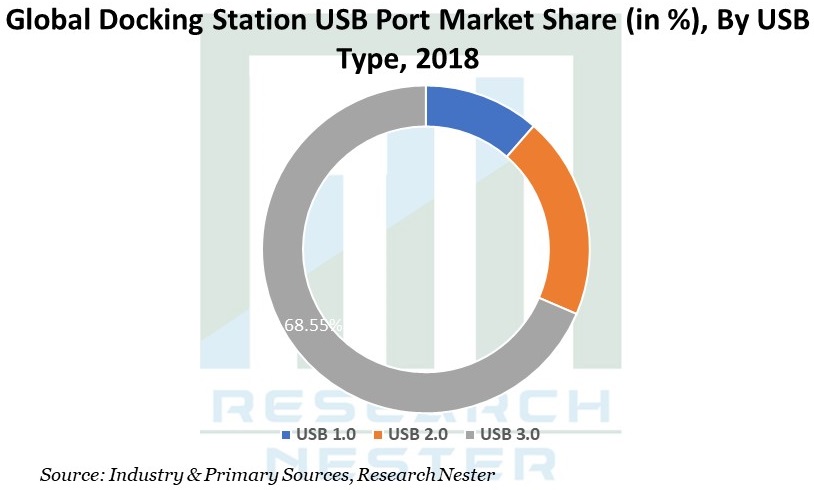 The penetration of smart and mobile devices such as laptops, smartphones, tablets and others has gradually increased over the past few years. More or less, an individual carry at least two or three such devices. Consumers across the globe are also adopting advanced and smart innovative technologies to upgrade their lifestyle and to grow their work productivity. Docking station USB port helps consumers with the ease of connectivity and power supply which is raising the adoption of such devices amongst individuals around the globe. The increasing use of mobile devices along with the high presence of these devices amongst the individuals and factors such as increase in the number of office spaces, development of BYOD policies in organizations, technological advancements observed in docking station USB port and the increasing population and globalization around the world are some of the factors anticipated drive the growth of the global docking station USB port market.

There is a surge in the sales of smartphones around the world owing to the developments being made in the device, which is replacing the use of laptops and desktops, reducing the need amongst the individuals to carry multiple devices at a time. Additionally, presence of counterfeit products which are available at very low price, coupled with compatibility issues observed in the docking station USB ports built by OEMs for laptops are some of the factors anticipated to impact negatively towards the growth of the global docking station USB port market.

What are the major factors driving the growth of the Docking Station USB Port market?

Increasing use of advanced technological communication gadgets is one of the major factors that is driving the growth of the market.

What would be the CAGR of Docking Station USB Port Market over the forecast period?

The market in Europe is anticipated to provide more business opportunities for growth in the future.

Who are the major players dominating in the Docking Station USB Port market?

What are the major segments in the global docking station USB port market?

The market is majorly segmented by USB type, connectivity type, dock type, number of ports, end user and by region.

What can be the significant growth opportunity for the USB type segment in the global docking station USB port market?

The USB 3.0 segment, which is a sub-segment of the USB type segment, held the largest market share of 68.55% in the year 2018 is anticipated to show significant growth opportunity

Growing concerns regarding the surge in the sales of smartphones is one of the major factors anticipated to act as a barrier towards the growth of the market.