The global concrete cooling market is estimated to grow with ~8% CAGR over the forecast period, i.e., 2022 – 2030. The growth of the market can be attributed to the growing need for concrete cooling in the industrial sector. The hydration of concrete is an exothermic process, which can release massive heat, sometimes up to 200-degrees Fahrenheit. The demand for concrete cooling is estimated to increase significantly, owing to the various disadvantages of using hot concrete, such as, poor tensile strength, unequal density, and quick water evaporation. Poor quality of concrete can create issues with the strength of the structure, which is another major growth factor for the market. Moreover, the market is estimated to further grow on the back of stringent government regulations for the standard of construction materials used in industrial and commercial activities. 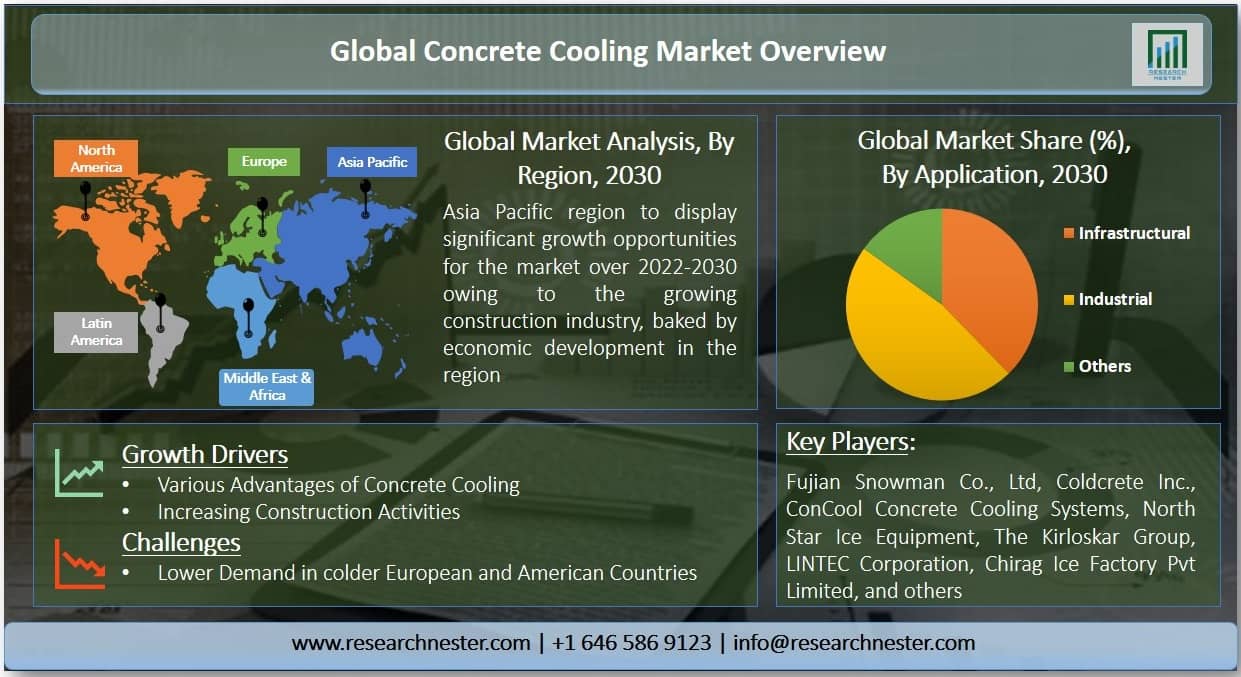 The global concrete cooling market is segmented by application into industrial, infrastructural, and others, out of which, the industrial segment is anticipated to hold the largest share in the market over the forecast period. This can be accredited to the crucial need for cooler concrete in industrial activities, as industrial construction includes large pours. If the concrete is hot, the structure will dry unevenly, compromising significantly in its durability and strength. This is estimated to boost the demand for concrete cooling in industrial applications. On the basis of end-use, the highway segment is estimated to hold the highest revenue share throughout the forecast period, owing to the increasing constructions of highways and roads across the globe, backed by the economic development. Roadways are being built rapidly to improve connectivity with remote areas, which is estimated to fuel the growth of this segment.

On the basis of geographical analysis, the global concrete cooling market is segmented into five major regions including North America, Europe, Asia Pacific, Latin America and Middle East & Africa region. The market in Asia Pacific region is estimated to witness noteworthy growth over the forecast period on the back of increasing construction activities in developing nations, such as, China and India. As per the data by the India Brand Equity Foundation (IBEF), the ministry of Road Transport and Highways has allocated a budget of USD 14.85 billion for FY 2021-22, while the government also aims to construct 23 new national highways by 2025. Moreover, rising demand for concrete cooling for the construction of dams, backed by the growth of hydro energy in this region, is also projected to boost the market growth in the region.

The market in the North America region is anticipated to garner notable market share during the forecast period on account of high expenditure in the public infrastructure, along with the presence of major industries in developed economies, including United States, and Canada. In 2018, the about USD 90 billion were spent on highway and bridge construction in the U.S., which is projected to grow to about USD 105 billion by 2022.

The market in the Middle East region is estimated to garner significant share during the forecast period, owing to the high temperature in the region, along with ongoing infrastructural development in the region. 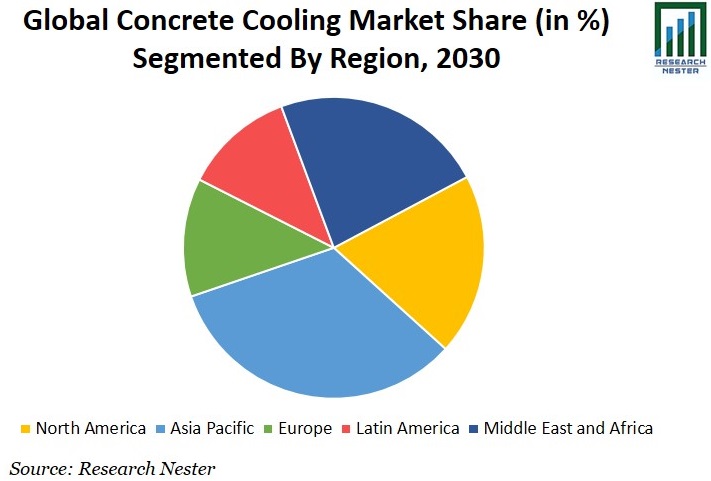 The global concrete cooling market is further classified on the basis of region as follows:

Our in-depth analysis of the global concrete cooling market includes the following segments:

1) What are the major factors driving the growth of the concrete cooling market?

Ans: Increasing need for concrete cooling in industrial sector backed by drawbacks of using hot concrete is estimated to boost the market growth.

2) What would be the CAGR of concrete cooling market over the forecast period?

3) What are the challenges affecting the concrete cooling market growth?

Ans: Lower demand in colder European and American countries are estimated to hamper the market growth.

4) Which region will provide more business opportunities for growth of concrete cooling market in future?

Ans: The market in Asia Pacific region is expected to provide maximum growth opportunities owing to the growing construction activities, baked by economic development in the region.

5) Who are the major players dominating the concrete cooling market?

7) What are the segments in the concrete cooling market?

Ans: The market is segmented by cooling method, application, end-use, and by region.

8) Which segment captures the largest market size in application segment in the concrete cooling market?

Ans: The industrial segment is anticipated to grow at a significant CAGR over the forecast period owing to the requirement of cool concrete for large pour.