The global liquid nitrogen market is estimated to garner a substantial amount of revenue by growing at a CAGR of ~5% over the forecast period, i.e., 2022 – 2030. The growth of the market can be attributed primarily to the rising demand for LN2 in industrial gas and electronic product applications, and rapidly growing infrastructural activities around the world. Furthermore, the world is witnessing an upsurge in development of sophisticated new technologies for manufacturing liquid nitrogen, which in turn is projected to offer profitable opportunities to the market in the imminent time. 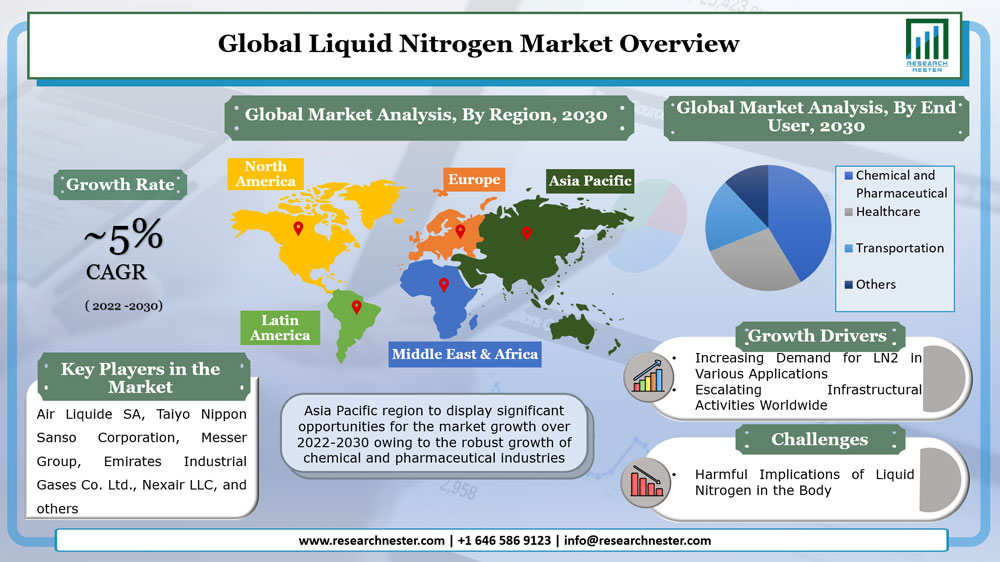 Increasing urbanization and industrialization, and escalating demand for liquid nitrogen as a refrigerant and coolant among several end user industries including food and beverages, healthcare, metal fabrication, and construction, are primarily expected to drive market growth in the upcoming years. According to the World Bank, 56.15 percent of the total population of the world lived in urban areas in 2020, up from 55.714 percent and 55.272 percent in 2019 and 2018 respectively. 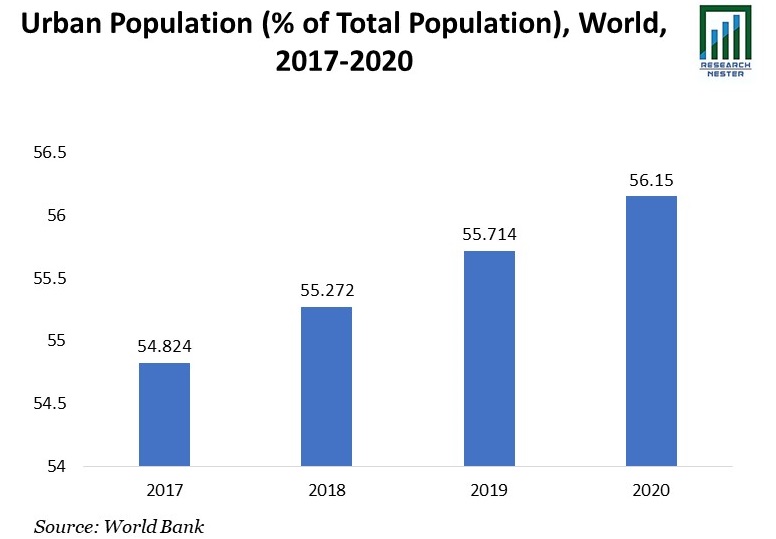 The market is segmented by end user into chemical and pharmaceutical, healthcare, transportation, and others, out of which, the chemical and pharmaceutical segment is anticipated to hold the largest share in the global liquid nitrogen market. This can be accounted to the high demand for liquid nitrogen from the industry as a result of its properties such as chemical inertness, non-toxicity and inflammability. Apart from this, rapid expansion of medical sector in China and India over the last few years is also evaluated to boost the market segment growth in the future. Additionally, on the basis of function, the coolant segment is assessed to grab the most significant share during the forecast period, which can be credited to the rise in usage of liquid nitrogen as a coolant in a wide range of industry verticals, including metal manufacturing and healthcare.

On the basis of geographical analysis, the global liquid nitrogen market is segmented into five major regions including North America, Europe, Asia Pacific, Latin America and the Middle East & Africa region. The market in the Asia Pacific is estimated to witness noteworthy growth over the forecast period on the back of the robust progress of chemical and pharmaceutical industries, especially in China, Japan and India, and increasing demand for electronic products in the region. According to the statistics by the Department of Chemicals & Petro-Chemicals of the Government of India, the production of major chemicals in India registered 9459 Thousand MT in the year 2012-13, and is further estimated to reach 14884 Thousand MT in the year 2025-26. In addition, presence of large and diverse domestic drug industry is also predicted to boost APAC’s market growth in the coming years. Moreover, the market in North America is assessed to acquire the largest share during the forecast period ascribing to the growing number of manufacturers and suppliers of liquid nitrogen, and rising research and development activities associated with the product. 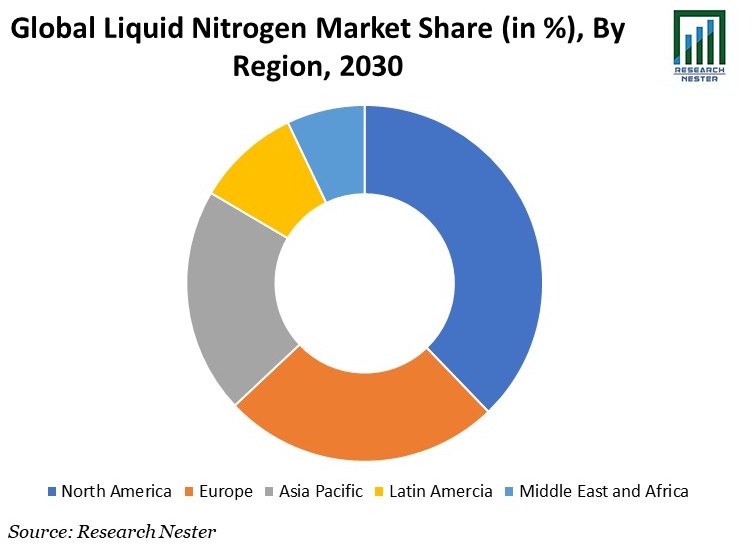 The global liquid nitrogen market is further classified on the basis of region as follows:

Our in-depth analysis of the global liquid nitrogen market includes the following segments:

1) What are the major factors driving the growth of the liquid nitrogen market?

Ans: The major factors driving market growth are rising demand for LN2 in industrial gas and electronic product applications and growing infrastructural activities around the world.

2) What would be the CAGR of liquid nitrogen market over the forecast period?

3) What are the challenges affecting the liquid nitrogen market growth?

Ans: Harmful impacts of liquid nitrogen on the body are estimated to hamper the market growth.

4) Which region will provide more business opportunities for growth of liquid nitrogen market in future?

Ans: Asia Pacific will provide more opportunities for market growth owing to the robust progress of chemical and pharmaceutical industries, especially in China, Japan and India.

5) Who are the major players dominating the liquid nitrogen market?

7) What are the segments in the liquid nitrogen market?

Ans: The market is segmented by storage type, function, technology, end user, and by region.

8) Which segment captures the largest market size in the function segment in the liquid nitrogen market?

Ans: The coolant segment is anticipated to hold largest market size and is estimated to grow at a notable CAGR over the forecast period and display significant growth opportunities.