The global composites market is estimated to garner a revenue of ~USD 165 Billion by the end of 2033 by growing at a CAGR of ~7% over the forecast period, i.e., 2023 – 2033. Further, the market generated a revenue of ~USD 100 Billion in the year 2022. The growth of the market can be attributed to rising demand for chemical and corrosion resistance material. These corrosion resistance material includes platinum and more. Platinum is known to be the least reactive metals and hence they are in high demand. Palladium was in high demand in North America in 2018 with approximate 65,000 ounces needed for the chemical industry. 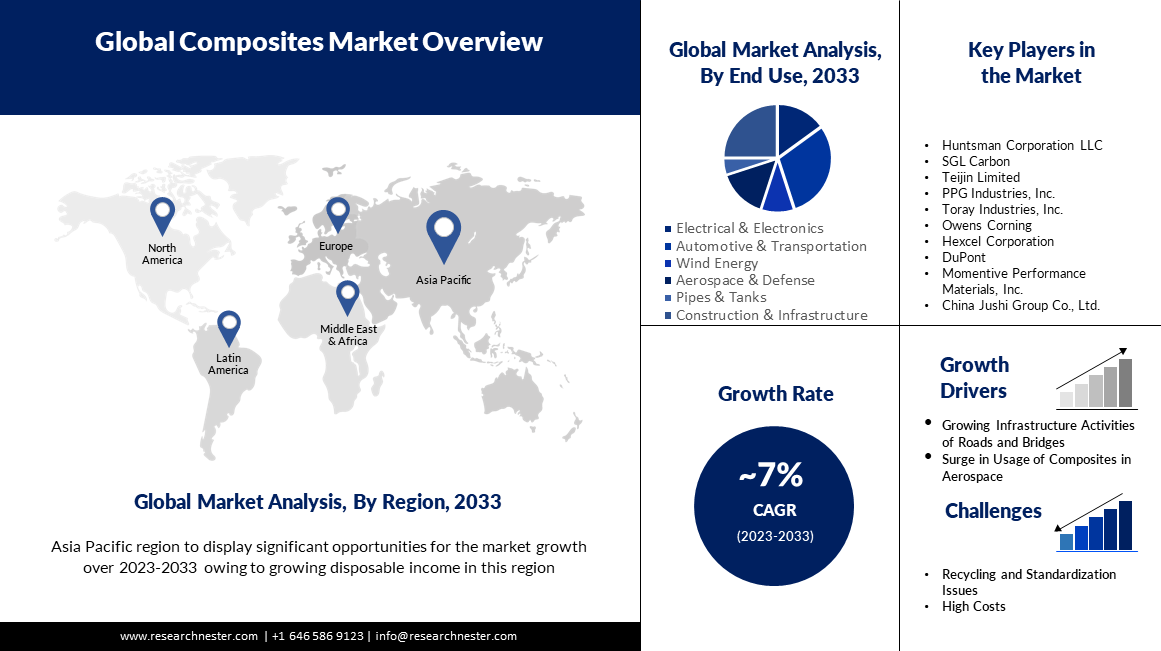 Additionally, growing chemical industry is anticipated to be the another major factor expected to boost the growth of the market. For instance, India currently has an approximately USD 175 Billion for chemicals and petrochemicals, and by 2025, it is anticipated to reach about USD 299 Billion.

Lack of standardization is expected to hamper the mass production of automobile and aircraft owing to the manufacturers considering conservative designs. Hence this factor is expected to hinder the growth of the market.

The composites market is segmented and analysed for demand and supply by end use into electrical & electronics, automotive & transportation, wind energy, aerospace & defense, pipes & tanks, and construction & infrastructure. Out of which, automotive & transportation segment is anticipated to garner the largest revenue by the end of 2033. The growth of this segment is anticipated by growing automotive industry. Also there has been growing investment made in automotive industry which is also expected to boost the market growth. For instance, between April 2000 and March 2022, the automotive industry attracted about USD 30 Billion worth of FDI in equity, or approximately 5% of all FDI in equity during that time.

Regionally, the global composites market is studied into five major regions including North America, Europe, Asia Pacific, Latin America and Middle East & Africa region. Amongst these markets, the market in Asia Pacific is projected to hold the largest market share by the end of 2033, owing to growing disposable income in this region. For instance, Singapore's disposable income per capita was anticipated to be around 30 thousand dollars within the ASEAN area. 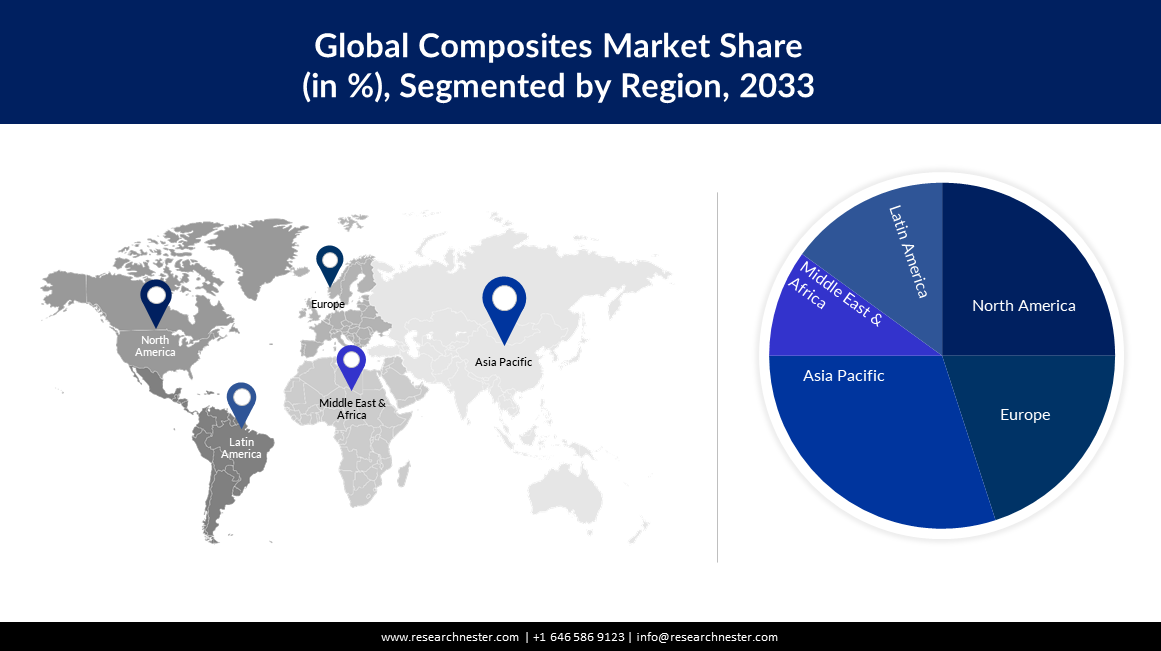 The global composites market is further classified on the basis of region as follows:

Our in-depth analysis of the global composites market includes the following segments:

What are the major factors driving the growth of the composites market?

The major factors driving the growth of the market are growing infrastructure activities of roads and bridges, surge in usage of composites in aerospace, rise in aging infrastructure, and others.

What would be the CAGR of composites market over the forecast period?

What are the challenges affecting the composites market growth?

Recycling and standardization issues, high costs, and increasing trade conflicts are some of the major factors estimated to hinder the growth of the market.

Which region will provide more business opportunities for growth of composites market in future?

Who are the major players dominating the composites market?

What are the segments in the color cosmetics market?

The market is segmented by target market, distribution, application and by region.

Which segment captures the largest market size in end use in the composites market?

The mass product segment is anticipated to garner the largest market size by the end of 2033 and display significant growth opportunities.