Varicella vaccine also known as chickenpox vaccine is the vaccine which provides protection against chickenpox. It has been notified that, one dose of vaccine prevents 95% of moderate disease and 100% of several diseases. Two doses of vaccine are more effective than one. If it is given to those who are not immune within five days of exposure to chickenpox, it prevents most cases of diseases. Vaccinating a large population means protecting even those who are not vaccinated. It is given by injection under the skin.

The disease has an incubation period of 10-21 days and is highly contagious. Varicella is highly contagious through physical contact, two days prior when the symptom appears. Mostly, it is a mild disorder in childhood but tends to be more severe in adults. It may be fatal specifically in neonates and in immunocompromised patients. There might be some minor side effects of the vaccine such as pain at the site of injection, rash, fever, sore arm from the shot and stiffness in joints. Several side effects are rare in nature and occurs mostly to the people who have poor immune system. The side effects are more likely to occur after the first dose than after the second.

Following infection, the virus remains latent in neural ganglia, and upon subsequent reactivation VZV may cause zoster (shingles), a disease mainly affecting the elderly and immunocompromised persons. The individual cases can be prevented or modified by varicella-zoster immune globulin or be treated with antiviral drugs, control of varicella can be achieved only by widespread vaccination.

The World Health Organization (WHO) recommends routine vaccination only if a country can keep more than 80% of the people vaccinated. If only 20% to 80% of people are vaccinated, it is possible that more people will get the disease at an older age and outcomes may worsen.

Not every person is vaccinated against chickenpox which increases chances of its occurrence. With increasing prevalence of chickenpox among people –children and adults both, the need in order to get vaccination increases. Due to growing prevalence of chickenpox in people, the government is increasing its funding on healthcare facilities and ensuring the availability of vaccine at a subsidized rates, free or subsidized consultancy services, and other services to the patients which is expected to boost the growth of the chickenpox (varicella) vaccine market.

The chickenpox (varicella) vaccine market is anticipated to record a CAGR of around 7.8% during the forecast period i.e. 2019-2027. The market is segmented by product type and product application. By product type, the combination vaccine segment is anticipated to have significant growth attributing to the fact that medicines which are given separately, are given together in one shot preventing three diseases together. The global varicella vaccine industry is concentrated. It has been observed that around 72.50% of the market share in production of these vaccines is grasped by the top 5 manufacturers. Out of which, Merck holds 30.40%, GSK holds 10.04%, and Shanghai Institute holds 11.60% and other manufacturers hold 47.96% of the market share of the varicella vaccine market. CLICK TO DOWNLOAD SAMPLE REPORT 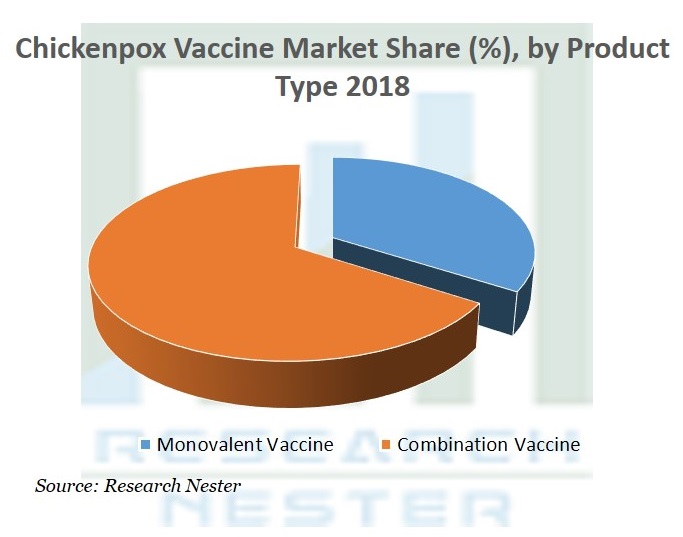 It has been notified that, not every person is vaccinated against chickenpox which increases the chances of its occurrence. With increasing prevalence of chickenpox amongst the people –children and adults both, the need to get vaccination increases which is expected to boost the growth of the chickenpox (varicella) vaccine market.

With increasing prevalence of diseases, the drug development companies are spending more in order to manufacture drugs that are highly effective and cost efficient so that the people prefer to buy it which is expected to boost the growth of the chickenpox (varicella) vaccine market.

The vaccines cost in order to cure chickenpox is on a higher side keeping in mind, use, expenses for research and development activities and other subsidiary activities which is expected to impede the growth of the chickenpox (varicella) vaccine market.

Our in-depth analysis of the chickenpox (varicella) vaccine market includes the following segments:

The chickenpox (varicella) vaccine market is further classified on the basis of region as follows: