The global central lab market is estimated to garner a revenue of ~USD 4 Billion by the end of 2031 by growing at a CAGR of ~6% over the forecast period, i.e., 2022 – 2031. Further, the market generated a revenue of ~USD 2 Billion in the year 2021. The growth of the market is primarily attributed to the worldwide growing prevalence of numerous genetic abnormalities and development of novel drugs and devices to treat such type of abnormalities.For instance, in 2021, around 85 novel active substances (NASs) were officially launched globally, which was more than twice the number launched five years ago. 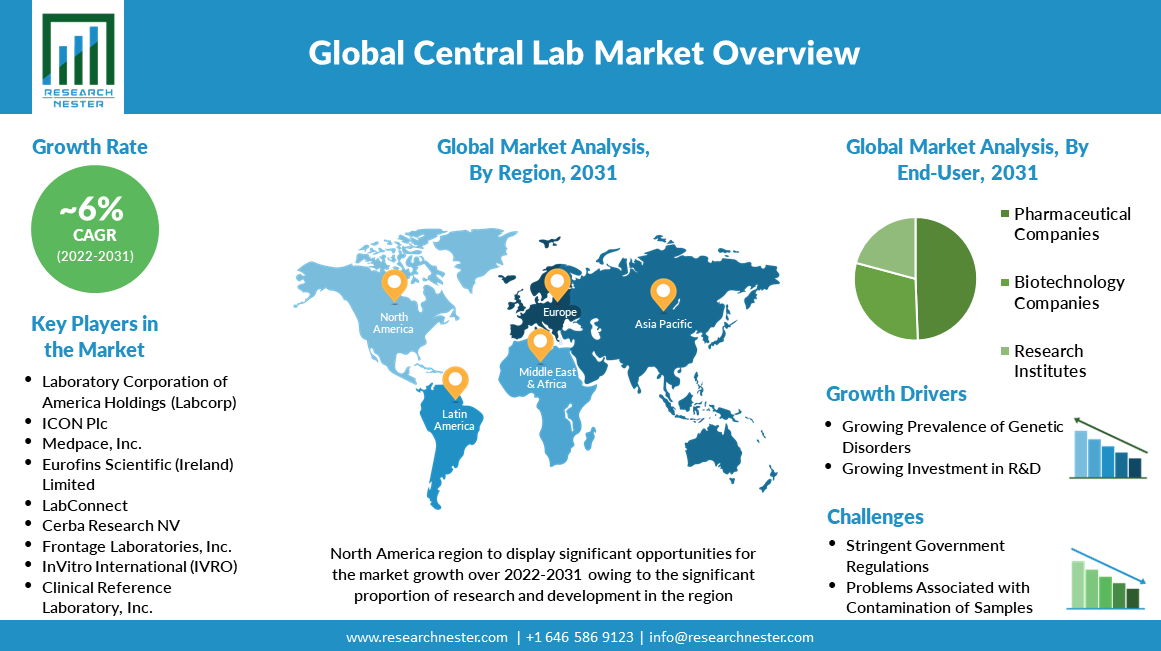 As the occurrence of various diseases rises, so does the demand for new drug discovery and development.Pharmaceutical companies have prioritized efficient service and high-quality data without having to compromise. Therefore, these companies employ central labs for detection,testing, development, and production of novel drugs and devices. Central labs are intended to facilitate clinical trials for novel drugs as well as genetic testing for a number of genetic diseases. Therefore, ongoing clinical trials for the production of new drugs are estimated to lead the growth of the market.For instance, till 2022, there have been approximately 134,359 (32%) clinical trials are registered in US region alone, whereas around 221,438 (52%) clinical trials are registered in non-US regions.

The global central labmarket is segmented and analyzed for demand and supply by end-user intobiotechnology companies, pharmaceutical companies, and research institutes, out of which pharmaceutical companies segment is anticipated to hold the notable share in the global central lab market during the forecast period on account of the clinical studies of prevalent genetic illnesses such as sickle cell anemia, Parkinson's disease, and Alzheimer's disease.As per the data of World Health Organization, in the last 25 years, the prevalence of Parkinson disease (PD) has doubled, more than 8.5 million people worldwide anticipated to have PD in 2019.

To tackle such condition, many clinical trials for new drugsand reformulation have been running out to explore the possibilities of an effective treatment for Parkinson disease. For instance, Carbidopa and levodopa (CD/LD), a widely recognized generic PD treatment combination, have been reformulated as IPX-203 by Amneal Pharmaceuticals in an effort to lessen symptom fluctuations.

According to the statistics by the World Health Organization, the global per capita healthcare expenditure amounted to USD 1,064.741 in the year 2017. The worldwide healthcare expenditure per person grew from USD 864.313 in 2008 to USD 1,110.841 in 2018, where the U.S. is the top country that amounted to healthcare expenditure of USD 10, 623.85 per capita in 2018. As of 2018, the domestic general government healthcare spending in the U.S. was USD 5355.79, which grew from USD 3515.82 in 2008. These are some of the factors responsible for market growth over the past few years. Moreover, as per the projections by the Centers for Medicare & Medicaid Services (CMS), the estimated average annual percent change related to National Health Expenditures (NHE) in the U.S. was 5.2% in 2020 as compared to 2019 (4.5%). Furthermore, the National Health Expenditures are projected to reach USD 6,192.5 Billion in 2028, where the per capitaexpenditure is estimated to touch USD 17,611 in the same year. These are notable indicators that are anticipated to create lucrative business opportunities in upcoming years.

Regionally, the global central labmarket is studied into five major regions including North America, Europe, Asia Pacific, Latin America and Middle East & Africa region. Amongst these markets, the market in North America is projected to hold the largest market share by the end of 2031 backed by the high prevalence of infectious and chronic diseases, an increase in patient awareness about the significance of laboratory tests, and significantly growing proportion of research and development in the region.For instance, medical and health research and development (R&D) investment in the United States reached approximately USD 244 billion in 2020, an 11% expansion from 2019. 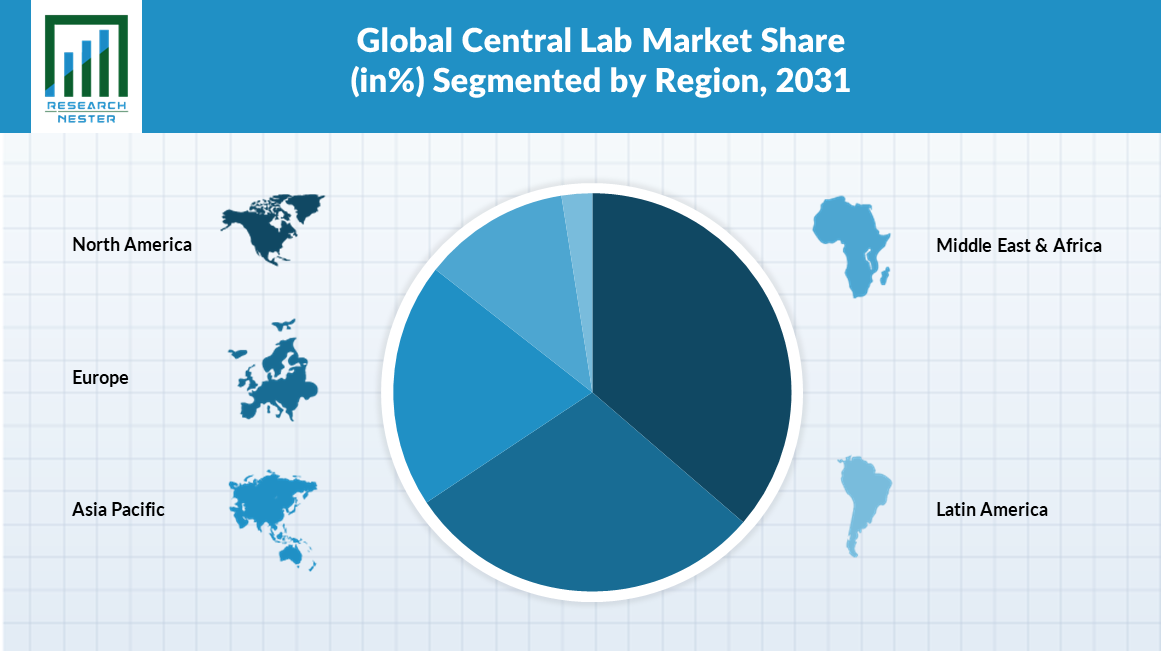 The global central labmarket is further classified on the basis of region as follows:

Our in-depth analysis of the global central labmarket includes the following segments:

What are the major factors driving the growth of the central lab market?

What would be the CAGR of central lab market over the forecast period?

What are the challenges affecting the central lab market growth?

Which region will provide more business opportunities for growth of central lab market in future?

Who are the major players dominating the central lab market?

What are the segments in the central lab market?

The market is segmented by service type, end-user, and by region.

Which segment captures the largest market size in end-user segment in the central lab market?