As reported by the World Health Organization (WHO), in 2015, around 17.7 million people died from cardiovascular diseases, which represent 31% of all global deaths. Of these deaths, around 7.4 million were due to coronary heart disease and 6.7 million were due to stroke. According to the World Health Organization (WHO) in the year 2015, about 8.5% of adults who were aged 18 years and older were reported to have had diabetes and around 1.6 million deaths were directly caused by diabetes in 2014. Thus, rising occurrence of chronic diseases leading to heart attacks and failures is attributed to serve as the major factor in propelling the global cardiovascular surgical devices market.

Currently the market is pushed by some key factors for instance launch of rental services for cardiovascular surgical devices, reducing the rate and making it reasonable in developing countries, future development in technology will help in introducing patient friendly devices. Advance in healthcare industry in the past few years and growing technological explorations is projected to drive cardiovascular surgical devices market steadily during the forecast period. On the basis of regional platform, global Cardiovascular Surgical Devices market is segmented into five major regions including North America, Europe, Asia Pacific, Latin America and Middle East & Africa region. 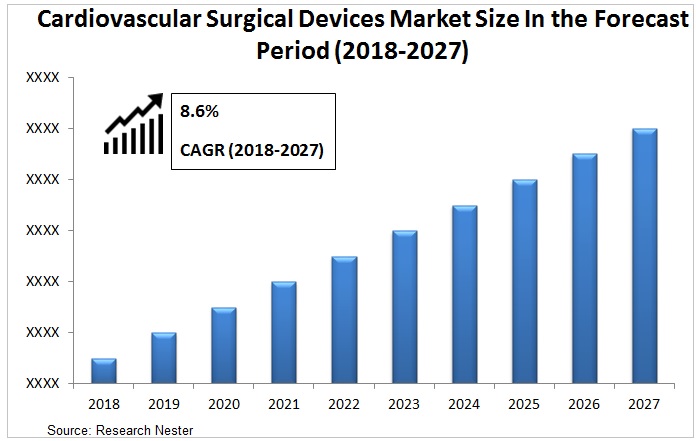 However, cost constraints associated to these devices along with lack of skilled professionals in the under-developed as well as the developing regions of the world is anticipated to sluggish the cardiovascular surgical devices market growth over the forecast period. Furthermore, the use of conventional surgical technology has been decreasing due to rise in use of alternative surgical technology that is estimated to serve as a key factor in the restraint of cardiovascular surgical devices market.

Global Cardiovascular Surgical Devices Market is further classified on the basis of region as follows: