The global bronchial spasm market is estimated to garner substantial revenue by the end of 2033 by growing at a CAGR of ~5% over the forecast period, i.e., 2023 – 2033. Further, the market generated noteworthy revenue in the year 2022. The growth of the market can primarily be ascribed to the rising cases of asthma across the globe. Based on the statistics provided by the World Health Organization (WHO), it was noticed that almost 262 million people were living with asthma in 2019 causing 455,000 deaths worldwide. 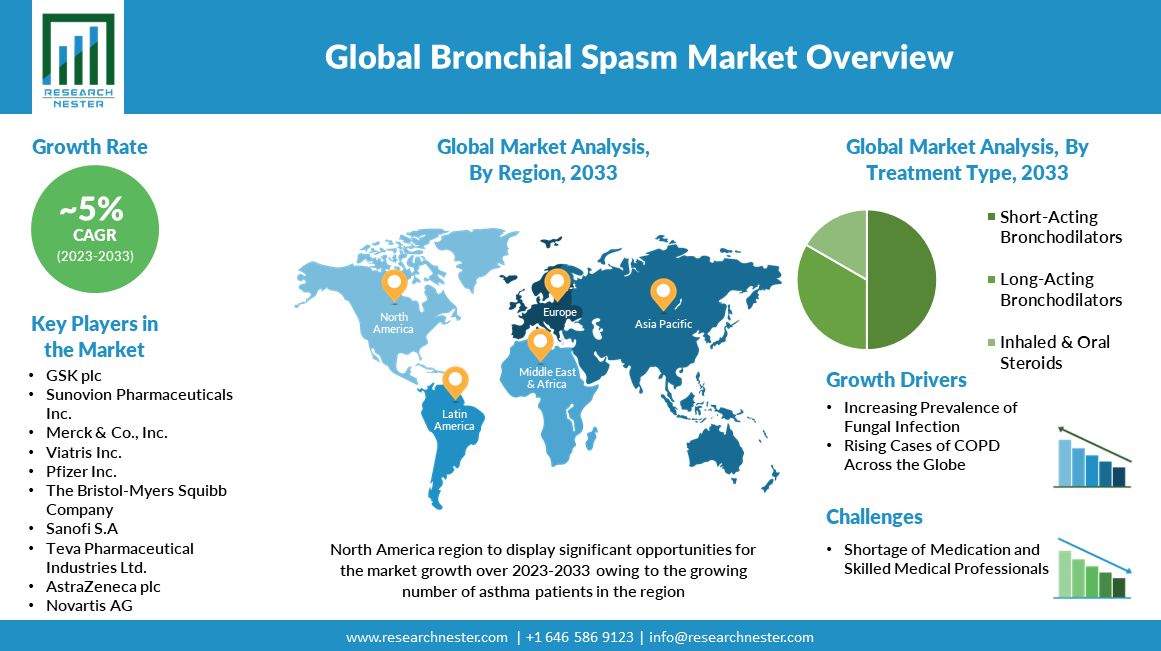 Global bronchial spasm market trends such as, the spiking number of fungal, viral, and bacterial infections of the lungs and skyrocketing prevalence of dust, pet, pollen, and other sorts of allergens are projected to influence the growth of the market positively over the forecast period. allergies are anticipated to be the 6th leading cause of death, for instance, over 45 million Americans are projected to be affected by allergies every year. Moreover, bronchial spasm is a condition in which the bronchi (airways in the lungs) get inflamed or tighten. The bronchial spasm can cause coughing, wheezing, and other respiratory diseases. Therefore, such factors are anticipated to push the growth of the market over the forecast period.

For instance, more than 5000 individuals are recommended to use reliever inhalers annually worldwide.

Fungal infection in the lungs most commonly results in asthma since fungi are responsible to colonize the tracheobronchial tree with adequate release of antigens. These antigens can either trigger or worsen asthma. Aspergillus is the most common fungus to cause lung infections. Hence, such a prevalence of fungal infection is estimated to propel the market growth over the forecast period.

As of 2019, approximately 3 million people died due to chronic obstructive pulmonary disease (COPD) making it 3rd leading disease to cause death globally.

World Bank released a set of data stating the health expenditure to hit USD 1,121 per capita in 2019.

The global bronchial spasm market is segmented and analyzed for demand and supply by treatment type into short-acting bronchodilators (albuterol and levalbuterol), long-acting bronchodilators (aclidinium, salmeterol, formoterol, indacaterol, and others), and inhaled & oral steroids, out of which, the short-acting bronchodilators segment is projected to witness noteworthy growth over the forecast period. The growth of the segment can be accounted to their higher demand to treat asthma attacks and COPD. For instance, about 10 people lose their lives due to asthma each day in the USA, while in 2020, nearly 4000 individuals died due to asthma in a similar region.

Regionally, the global bronchial spasm market is studied into five major regions including North America, Europe, Asia Pacific, Latin America and Middle East & Africa region. Amongst these markets, the market in North America region is projected to hold the largest market share by the end of 2033. The growth of the market in the region can be attributed to the escalation in the number of asthma patients. For instance, nearly 22 million people are estimated to be suffering from asthma, and about 18 million adults under 18 are anticipated to be living with asthma in the United States. Furthermore, higher penetration of major key players and the presence of well-structured healthcare infrastructure in the region is also expected to propel the market growth over the forecast period.

The global bronchial spasm market is further classified on the basis of region as follows:

Our in-depth analysis of the global bronchial spasm market includes the following segments:

What are the major factors driving the growth of the bronchial spasm market?

Increasing prevalence of fungal infection and rising cases of COPD across the globe are estimated to majorly boost the market growth.

What would be the CAGR of bronchial spasm market over the forecast period?

What are the challenges affecting the bronchial spasm market growth?

Shortage of medication and skilled medical professionals is estimated to challenge the market growth.

Which region will provide more business opportunities for growth of bronchial spasm market in future?

The market in North America region is projected to hold the largest market share by the end of 2033 and provide more business opportunities in the future.

Who are the major players dominating the bronchial spasm market?

What are the segments in the bronchial spasm market?

The market is segmented by treatment type, diagnosis, cause, end-user, and region.

Which segment captures the largest market size in short-acting bronchodilators in the bronchial spasm market?

The short-acting bronchodilators segment is anticipated to garner the largest market size by the end of 2033 and display significant growth opportunities.