The global bromine market is estimated to garner revenue of USD 6 Billion by the end of 2031 by growing at a CAGR of ~4% over the forecast period, i.e., 2022 – 2031. Further, the market generated revenue of USD 3 Billion in the year 2021. The growth of the market can be primarily attributed to the rising demand for bromine in oil and gas drilling. Oil and gas are extracted from porous stones by drilling holes into them. Through the use of clear brines containing bromine, it is possible to compensate for gravity's role in maintaining the required pressure so that pores drilled in porous stone do not close. A high amount of bromine is required for the growing oil and gas drilling activity. For instance, the number of oil and gas wells drilled worldwide increased by 12% from 2020 to 2021. Thus, the increasing demand for bromine in oil and gas drilling is expected to fuel the global bromine market growth over the forecast period. 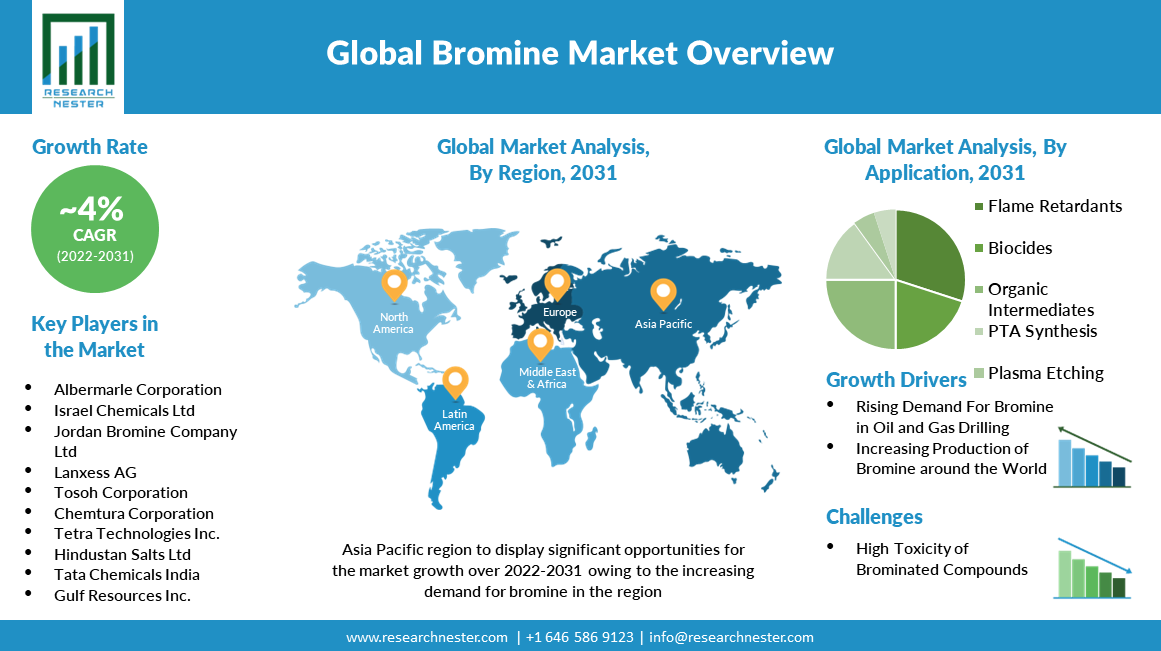 Bromine is naturally found in seas, lakes, and underground wells. Dead Sea is the richest source of bromine, containing 10-12 grams per liter. It is extensively used as a catalyst and reactant in the production of wide variety of products, including agrochemicals, dyes, completion fluids, flame retardants, and photographic chemicals. Furthermore, growing demand for bromine in drugs along with the expansion of the pharmaceutical industry is estimated to create massive market opportunities. Ingredients containing bromine are widely used in the production of both over-the-counter and prescription drugs. Globally, the Indian pharmaceutical industry is worth USD 42 billion. The Indian pharmaceutical market has grown at an annual rate of 17.7% since July 2021, compared to 13.7% in July 2020. As per India Ratings & Research, the Indian pharmaceutical market revenue is expected to increase by more than 12% in the financial year 2022. Moreover, the growing investments in oil and gas industries, developments in bromine derivatives, increase in polymer fabrication, demand for disinfectants, and utilization of hydrogen bromide in flow batteries are market trends anticipated to drive the global bromine market growth over the forecast period.

An increase in exports and imports of bromine owing to its diverse applications in agriculture and water treatment systems, is expected to propel bromine demand over the forecast period. Furthermore, rising funding in the agricultural sector in order to provide better access to daily resources for consumers is another factor expected to broaden the global bromine market size in coming years.

The global bromine market is segmented and analyzed for demand and supply by application into flame retardants, biocides, organic intermediates, PTA synthesis, plasma etching, and oil and gas drilling. Out of these segments, the flame retardants segment is anticipated to capture the largest market size in the global bromine market. Brominated flame retardants (BFRs) are compounds containing bromine that slow down the rate of ignition of substances. Since bromine derivatives exhibit fire-resistant properties, they are widely used in flame retardants. This factor is expected to drive segment growth over the forecast period. The investment and development in flame retardants are expected to drive the segment's growth in the future.  For instance, Clariant announced the investment of ~USD 60 million in 2021 to expand production of the Exolit OP flame retardants at its first Chinese production facility in Daya Bay, Huizhou in the province of Guangdong

Regionally, the global bromine market is studied into five major regions including North America, Europe, Asia Pacific, Latin America and Middle East & Africa region. Amongst these markets, the market in Asia Pacific is projected to hold the largest market share by the end of 2031. The demand for bromine in this region is largely driven by its increased use in developing countries such as China, Japan, and India. Property Losses from fire-related incidents are increasing every year in the region, which encourages the use of flame retardants. This factor is anticipated to boost the demand for bromine during the forecast period. Flame retardants are extensively used in the production of plastic and electronic equipment. Furthermore, economic growth and rising disposable personal income have pushed the use of flame retardants in Asia Pacific. It was observed that, China's per capita disposable income reached USD 5500 in 2021, up 9.1% from the previous year. 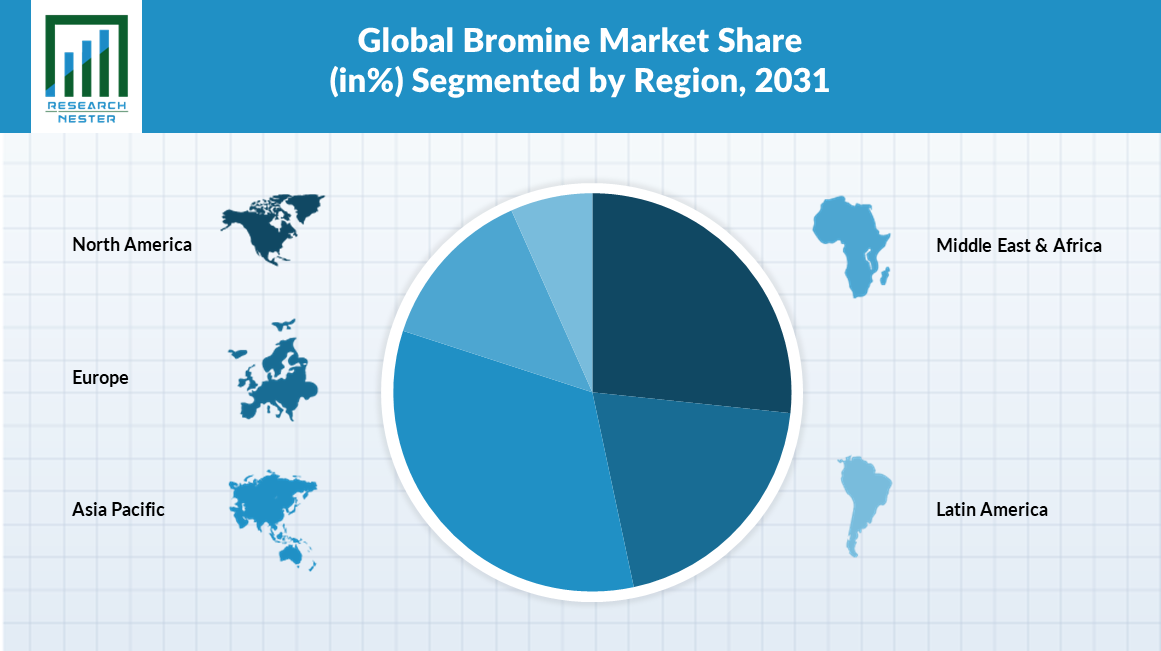 The global bromine market is further classified on the basis of region as follows:

Our in-depth analysis of the global bromine market includes the following segments:

What are the major factors driving the growth of the bromine market market?

Rising demand for bromine in oil and gas drilling, utilization of hydrogen bromine in flow batteries and rising exports of bromine worldwide are the major factors driving the market growth.

What would be the CAGR of bromine market market over the forecast period?

What are the challenges affecting the bromine market market growth?

Governmental regulations on usage of bromine and hazardous risk associated with the bromine elements are challenges expected to hinder market growth.

Which region will provide more business opportunities for growth of bromine market market in future?

Who are the major players dominating the bromine market market?

What are the segments in the bromine market?

The market is segmented by derivative, application, end user, and by region.

Which segment captures the largest market size in application segment in the bromine market?

The flame retardants segment is anticipated to garner the largest market size by the end of 2031 and display significant growth opportunities.