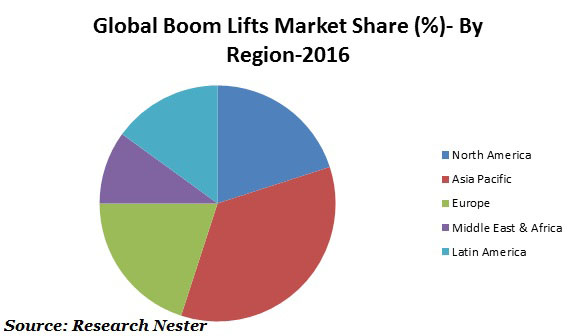 In terms of region, global boom lifts market is segmented into five major regions including North America, Europe, Asia Pacific, Latin America and Middle East & Africa region. Among these regions, Asia Pacific region has been the fastest growing and revenue generating market of boom lifts due to increasing constructional activities and enhancement of existing infrastructure in emerging economies such as China and India. Further, the demand for boom lifts in Asia Pacific region is anticipated to increase in near future, where India and China are expected to be major contributors to the growth of global boom lifts market. CLICK TO DOWNLOAD FREE SAMPLE REPORT

In terms of share, North America and Europe regions are major regional market of boom lifts. The regional boom lifts market of North America and Europe region are more mature and are anticipated to witness a slow growth over the forecast period. Moreover, Middle East & Africa region is also expected to witness a satisfactory growth over the forecast period.

Global boom lifts market is further classified on the basis of region as follows:

Rising construction activities in emerging economies and increasing investment in infrastructure development are fueling the growth of global boom lifts market. Further, major companies have been producing advanced boom lifts with higher capabilities and are expected to increase the demand for boom lifts in various end-use industries.

However, end users of boom lifts prefer to maintain the existing boom lifts and do not invest in new machines due to their high cost. High cost of boom lifts is a major challenge which is restraining the growth of global boom lifts market.

The global boom lifts market is segmented as follows: