The global blastomycosis treatment market is estimated to grow at a CAGR of ~3.5% over the forecast period, i.e., 2022 – 2030. The growth of the market can be attributed to the increasing cases of fungal infections, backed by poor immune system in majority of the people. Blastomycosis is caused by a fungus, Blastomyces, which is found in soil and decomposing organic matter. The infection is caused by inhalation of fungal spores, which primarily infects the lungs and respiratory tract. People with poor immunity are at higher risk of infection or severe infection. Poor lifestyle, unhealthy eating habits, unhygienic surroundings, and growing prevalence of lifestyle diseases are some of the major factors promoting the weakening of immune system. Moreover, growing prevalence of drug-resistant fungal infections is estimated to boost the demand for development of new anti-fungal drugs, which, in turn, is projected to boost the market growth. According to the World Health Organization, drug resistance in fungi is a silent crisis, which needs to be addressed globally. Government initiatives, such as, World Antimicrobial Awareness Week started in November 2020 by the WHO, and Global Antimicrobial Resistance and Use Surveillance System (GLASS) launched in 2015, are estimated to strengthen the market growth. 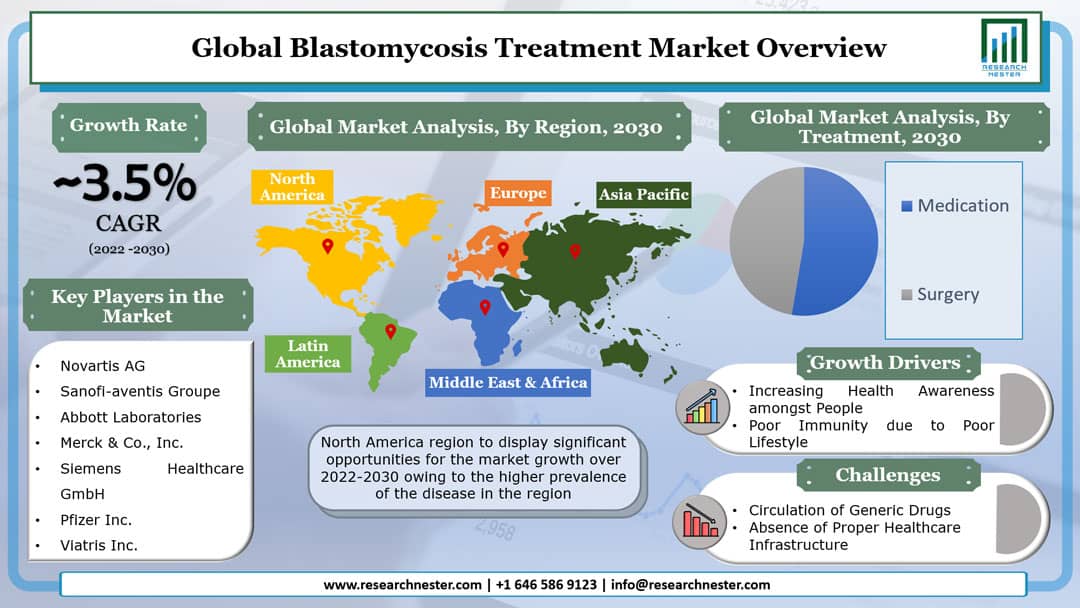 Increasing health awareness amongst individuals globally, is a major factor estimated to boost the market growth. The government is constantly investing to improve the healthcare facilities for the public. Healthcare expenditure has witnessed major growth in the past decade, which is another factor foreseen to drive the market growth. According to the data by the World Bank, the global per capita healthcare expenditure had touched USD 1,111.082 in 2018. 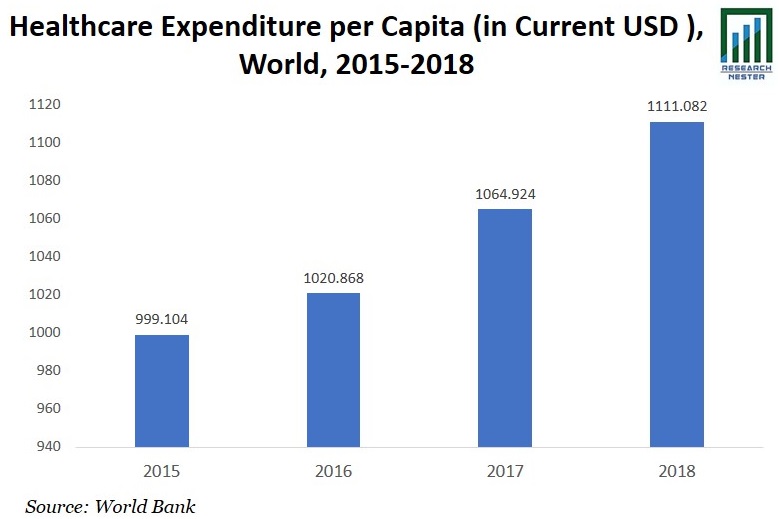 The global blastomycosis treatment market is segmented by anatomy into lung, bones, central nervous system, and others, out of which, the lung segment is anticipated to hold the largest share in the market over the forecast period on account of increasing cases of lung infection of blastomycosis, as lung is the first organ to come in contact with the fungus. In severe cases, infection reaches the bones and other parts of the body, which is rare.

On the basis of geographical analysis, the global blastomycosis treatment market is segmented into five major regions including North America, Europe, Asia Pacific, Latin America and Middle East & Africa region. The market in Asia Pacific region is estimated to attain modest growth over the forecast period on the back of poor immunity, and high prevalence of lifestyle diseases. The improving healthcare sector, and economic development in the APAC region is also estimated to boost the market growth.

The market in the North America region is anticipated to gain the largest market share throughout the forecast period owing to the higher prevalence of blastomycosis, along with other fungal infections, in the United States and Canada. According to the data by the U.S. Center of Disease Control and Prevention (CDC), occurrence of blastomycosis varies from region to region, and can go as high as 10-40 cases per 100,000 individuals in some regions of the U.S. 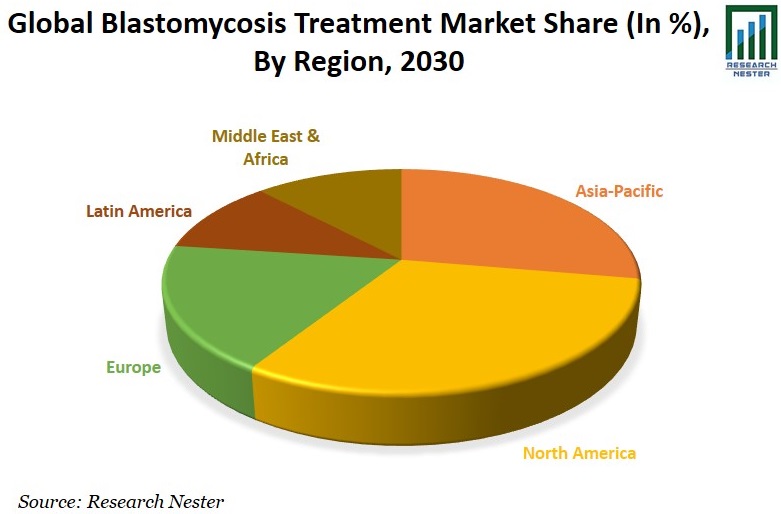 The global blastomycosis treatment market is further classified on the basis of region as follows:

Our in-depth analysis of the global blastomycosis treatment market includes the following segments:

What are the major factors driving the growth of the blastomycosis treatment market?

The increasing cases of blastomycosis, and poor immunity estimated to boost the market growth.

What would be the CAGR of blastomycosis treatment market over the forecast period?

What are the challenges affecting the blastomycosis treatment market growth?

Circulation of generic drugs is estimated to hamper the market growth.

Which region will provide more business opportunities for growth of blastomycosis treatment market in future?

Who are the major players dominating the blastomycosis treatment market?

What are the segments in the blastomycosis treatment market?

The market is segmented by anatomy, treatment, end-user, and by region.

Which segment captures the largest market size in treatment segment in the blastomycosis treatment market?