The biogas plant market is estimated to garner a large revenue and grow at a CAGR of ~7% over the forecast period, i.e., 2022 – 2030. The growth of the market can be attributed to the increasing rate of pollution around the world, which in turn is giving rise to the environmental concerns associated with the reduction of carbon emissions. According to the World Health Organization, 91% of the world’s population reside in places where air quality index exceeds the WHO guidelines. Moreover, 4.2 million deaths occur every year as a result of exposure to outdoor air pollution. In addition, as fossil fuels are limited in quantity and are widely consumed for various purposes, the emphasis on alternative environment-friendly fuels that produce imperishable form of energy is expected to witness growth. This is another factor considered to drive market growth in the upcoming years. Furthermore, the growing adoption of Paris climate change agreement by a large number of countries is also projected to increase the usage of biogas in the near future, in order to minimize the implications of global warming. 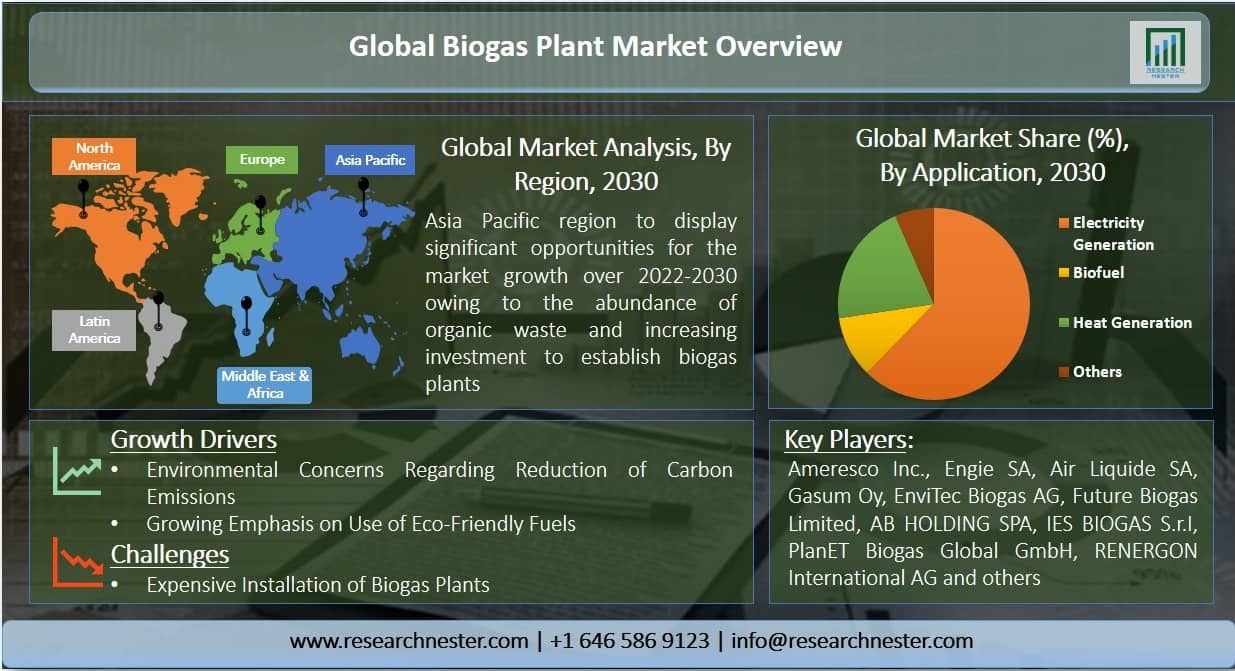 The market is segmented by application into electricity generation, biofuel, heat generation, and others, out of which, the electricity generation segment is anticipated to hold the largest share in the biogas plant market on account of rising demand for electricity and growing electrification of transport. As per the data provided by International Energy Agency (IEA), the total energy consumption in the world increased by 856 TWh from 2017 to 2018. The values for the same were 21,460 TWh and 22,316 TWh in the respective years. Along with these, increasing disposable income of people around the world coupled with escalating usage of digitally connected devices is also evaluated to boost growth of this market segment in the future. Additionally, on the basis of type, the segment for small digesters is assessed to witness the highest growth during the forecast period owing to the increasing implementation of these type of biodigesters in rural areas of developing countries to reduce dependency on LPG, natural gas and other hydrocarbon fuels.CLICK TO DOWNLOAD SAMPLE REPORT

On the basis of geographical analysis, the biogas plant market is segmented into five major regions including North America, Europe, Asia Pacific, Latin America and the Middle East & Africa. The market in the Asia Pacific region is estimated to witness noteworthy growth over the forecast period on the back of ample availability of organic waste in countries, namely India, China and Thailand. According to the World Bank, 23% of the world’s waste is generated in East Asia and Pacific. It is calculated that by 2030, around 602 million tons of waste will be accumulated in this region. Apart from these, growing investments for the establishment of biogas plants is also projected to boost market growth in the region. Moreover, the market in Europe is predicted to gather the largest share by the end of 2030 ascribing to the huge volume of biogas production and rising spending by key market players to build modern biogas production facilities in the region.

The biogas plant market is further classified on the basis of region as follows:

Our in-depth analysis of the biogas plant market includes the following segments:

What are the major factors driving the growth of the biogas plant market?

The major growth drivers for the market are environmental concerns to reduce carbon emissions and increasing focus on alternative eco-friendly fuels.

What would be the CAGR of biogas plant market over the forecast period?

What are the challenges affecting the biogas plant market growth?

High installation cost of biogas plant is estimated to hamper the market growth.

Which region will provide more business opportunities for growth of biogas plant market in future?

Asia Pacific will provide more opportunities for market growth owing to the high availability of organic waste in India, China and Thailand.

Who are the major players dominating the biogas plant market?

What are the segments in the biogas plant market?

The market is segmented by type, application, feedstock, and by region.

Which segment captures the largest market size in the application segment in the biogas plant market?

The electricity generation segment is anticipated to hold largest market size and is estimated to grow at a notable CAGR over the forecast period and display significant growth opportunities.