Automotive coatings are used for coating automobile vehicles to improve their durability and deliver prevention from dust, corrosion, and few other physical components. It is used for protective as well as decorative purposes in vehicles. These coatings provide excellent vehicle finish, gloss and surface hardness which makes them resistant to abrasion and chemical impacts. These automobiles paints are applied in several layers. Initially, a primer is applied, followed by a basecoat and a clearcoat to give a polished appearance.

The global automotive coatings market is anticipated to record a CAGR of around 7% over the forecast period i.e. 2019-2027. 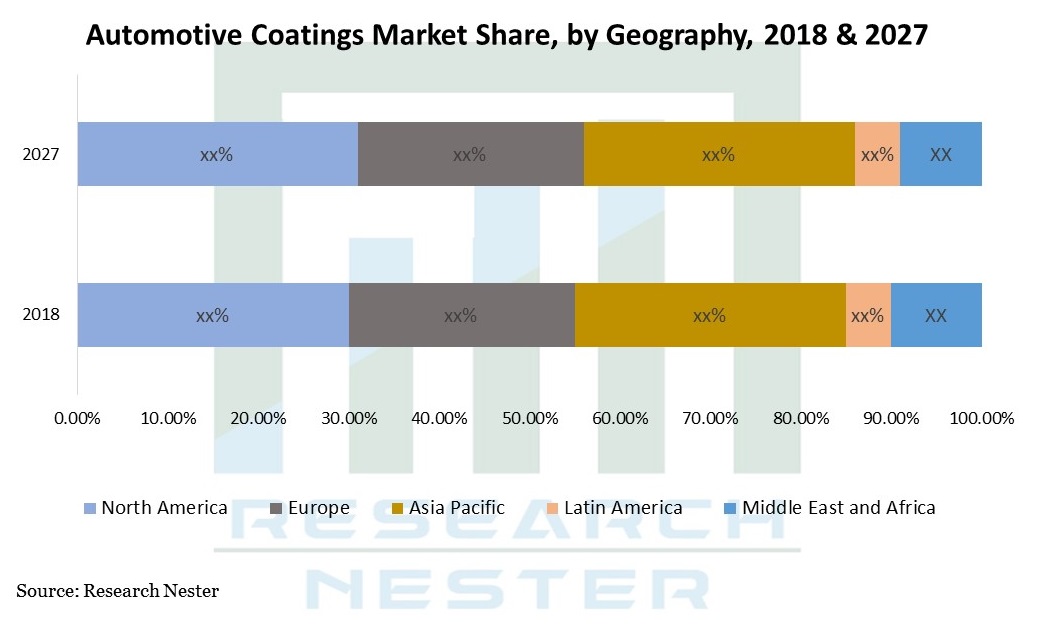 The global automotive coatings market has showcased a significant growth on account of increasing vehicle production, especially in the developing countries. According to OICA, the production of passenger cars increased from 3,961,327 in 2017 to 4,064,774 in 2018 for India with a total percentage increase of 2.6%. Moreover, rise in population and personal income level are also among the major factors driving the growth of the automobiles market, which in turn has significantly contributed to the growth of automotive coatings.

Increased awareness regarding the environment protection and stringent regulations concerning the same, have led to a gradual shift towards low or zero – VOC coating products. Application of low or zero- VOC coatings decreases the emissions of harmful air pollutants, such as toluene, xylene, ethylbenzene and methyl ethyl ketone. Thus, the use environment friendly water-borne and powder coatings is estimated to foster the growth of the market. Moreover, rising demand for electric and hybrid vehicles in upcoming years which will lead to lesser direct emissions, are eventually expected to improve the air quality in urban areas and contribute to increased consumption of these coatings.

Automotive coatings make use of numerous chemical materials for their manufacturing. Titanium dioxide, a white inorganic pigment is widely used in automotive coatings. This can be attributed to its efficiency in scattering visible light, and thus imparting whiteness and brightness to vehicles when applied. However, unpredictable prices of titanium dioxide, is expected to be a major raw material restraint for the market.

The car painting industry has witnessed tremendously fast-growing trends by way of process and materials developments, mainly followed by the general progress of the manufacturing technologies. For instance, application of a UV- durable electrocoat is expected to have a significant potential to eliminate the primer application in automotive coatings. This would further eliminate the requirement for conventional spray coupled with the associated capital and operational cost.

One of the recent developments in the coatings industry concerning automobiles includes the crucial role of color, materials and finish (CMF), which is likely to influence automotive designs significantly. An instance includes, while coating of the larger surfaces such as in crossover utility vehicles (CUV), the industry focuses to bring an opposite visual expression of the vehicle’s use which in turn is also linked to the company’s brand image.

Based on technology the automotive coatings market is segmented into water-borne, solvent-borne, powered and UV-cured coatings; by substrate into metal, plastic, glass and composite; by resin into polyurethane, epoxy and acrylic and by application into automotive OEM and automotive refinish.

Powdered coatings are anticipated to witness a higher demand over the forecast period owing to its long lasting and durable quality finishes. I addition, it is cost effective and more resistant to chipping, scratching and fading. Its most advantageous feature includes zero emission of volatile organic compounds or any other harsh compounds like paints.

The global automotive coatings market is further classified on the basis of region as follows:

The market in Asia Pacific is projected to show fastest growth during the forecast period owing to growing urbanization, rapid industrialization and economy growth of its developing countries. India, China, South Korea and Japan are among the major contributors to the market in this region. Additionally, increase in manufacturing of vehicles and rising consumer awareness regarding the protection and maintenance of the automobiles are also estimated to drive the growth of this regional market.

The market in North America and Europe is also anticipated to show a considerable growth on the back of growing demand for automobiles and rising income level of the people in this region.

Some major players in the market include: