Anti-aging drugs are combination of advanced biotechnology and clinical preventing medicines which are used for prevention and treatment of age related disorders and diseases. Anti-aging drugs are used especially by baby boomer generation and also by those consumers who are more concern about their looks and health. These drugs are used to reverse the effect of age on the body. Further, many medical technologies are being developed aiming to delay the aging process. 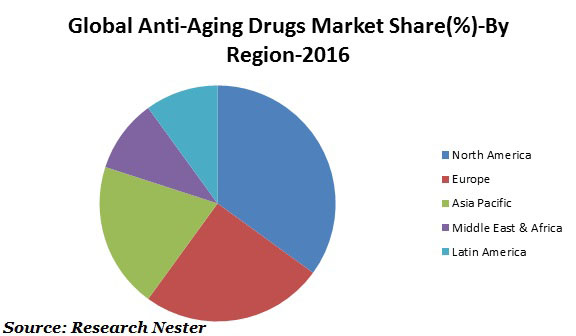 Europe region is expected to be the second largest market of anti-aging drugs due to various factors such as increasing disposable income and rising consciousness towards look and healthcare among people. Further, Europe is expected to witness satisfactory growth over the forecast period. On the other hand, Asia Pacific region is expected to flourish at highest compound annual growth rate (CAGR) over the forecast period owing to factors such as population explosion and development and availability of new anti-aging products in this region. India and China are expected to be the key countries propelling the growth of anti-aging drugs market in Asia Pacific region.

Global anti-aging drugs market is further classified on the basis of region as follows:

The global anti-aging drug market is segmented as follows: