The global adhesion barriers market is estimated to garner a revenue of USD 3.0 Billion by the end of 2033 by growing at a CAGR of ~8% over the forecast period, i.e., 2023 – 2033. Further, the market generated a revenue of USD 1.0 Billion in the year 2022. The rise in the incidence of post-operative adhesion is anticipated to be a key driver of the global adhesion barriers market. Although adhesions can develop everywhere, they most frequently happen in the chest, pelvis, and abdomen. According to research, abdominal adhesions can develop after surgery in approximately 92% of patients who have abdominal or pelvic surgery. Additionally, more than 9.5% of patients who have never had surgery develop abdominal adhesions. 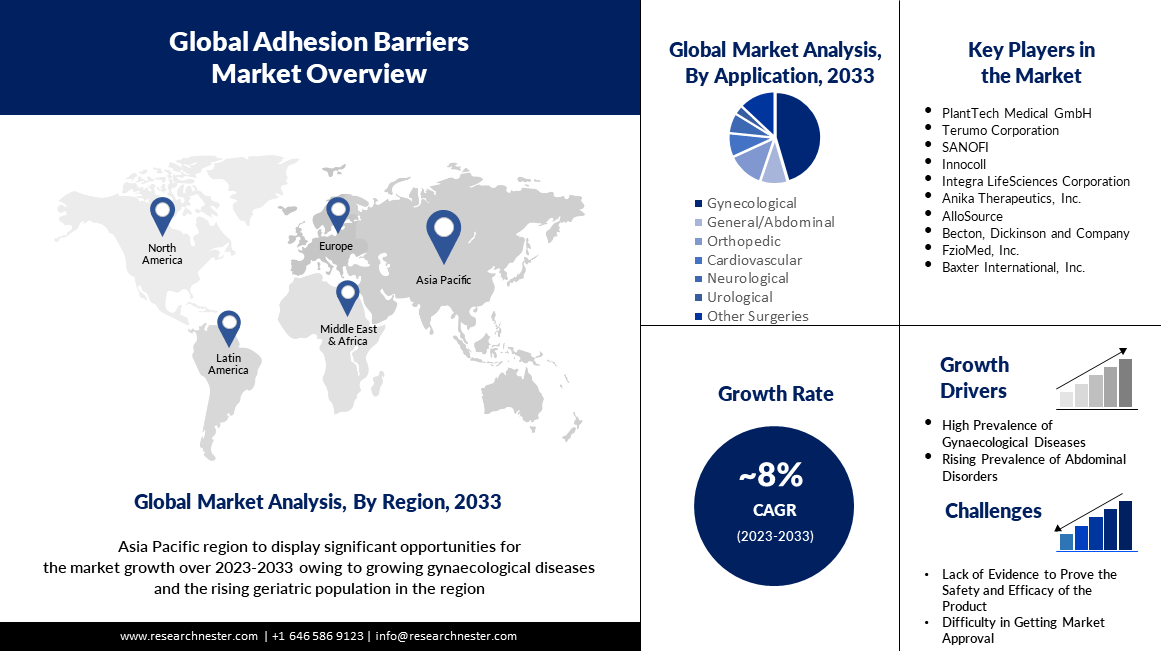 A band of scar tissue called adhesion holds the components of a tissue together. Adhesion can also be a thin band of fibrous tissue or a thin plastic wrap-like sheet of tissue. Injured tissues are kept apart by adhesion barriers, such as bodily barrier substances, to prevent the creation of a fibrin bridge between them. Adhesion forms as the body's repair processes react to any tissue disturbance, such as surgery, infection, trauma, or radiation, leading to an inflammatory response. Moreover, the increasing rate of surgery across the globe is estimated to drive market growth. It was observed that over the past 25 years, the number of ambulatory surgeries performed at community hospitals in the United States has steadily increased, rising from 13.4 million in 1995 to 19.2 million in 2018.

Increasing gynecological disorders including reproductive problems and fibrosis issues are leading to rising surgery cases among females across the globe and which in turn is estimated to boost the market growth.

Over the past few years, surgeons all over the world have used more adhesion barrier products. Postoperative pain, inflammation, infertility, and other gynecological and bowel movement problems frequently result in protracted suffering. This influences the selection of adhesion barrier films made by surgeons during surgical procedures.

Surgery for the abdomen, including the colon, spleen, appendix, stomach, and small intestines, is known as abdominal surgery. For a number of conditions, including Cesarean (C-Section), infections, tumors, hernia repairs, and even intestinal diseases, surgery can be performed.

The global adhesion barriers market is segmented and analyzed for demand and supply by application into gynecological, general/abdominal, orthopedic, cardiovascular, neurological, urological, and other surgeries. Out of these, the general/abdominal surgeries segment is estimated to hold the largest market share by the end of 2033. The growth of the segment can be attributed to the increasing abdominal diseases and infections which are leading to the rising rate of abdominal surgeries. In addition to this, the increasing geriatric population who are more prone to abdominal abnormalities is estimated to drive segment growth. One of the research studies included 128 patients with abdominal emergency surgery issues who were 62 or of age or older and found intestinal blockage (17.5%) and perforated peptic ulcer (38.1%) were the two most frequent reasons for urgent abdominal surgery. 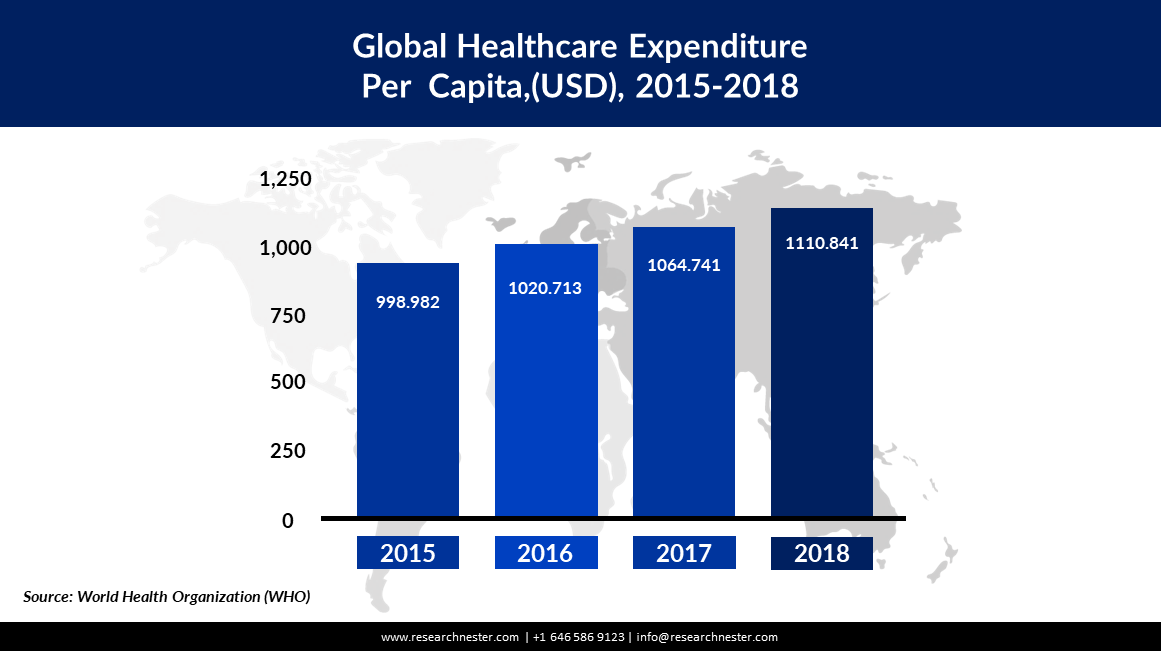 According to the statistics by the World Health Organization, the global per capita healthcare expenditure amounted to USD 1,064.741 in the year 2017. The worldwide healthcare expenditure per person grew from USD 864.313 in 2008 to USD 1,110.841 in 2018, where the U.S. is the top country that amounted to healthcare expenditure of USD 10, 623.85 per capita in 2018. As of 2018, the domestic general government healthcare spending in the U.S. was USD 5,355.79, which grew from USD 3,515.82 in 2008. These are some of the factors responsible for market growth over the past few years. Moreover, as per the projections by the Centers for Medicare & Medicaid Services (CMS), the estimated average annual percent change related to National Health Expenditures (NHE) in the U.S. was 5.2% in 2020 as compared to 2019 (4.5%). Furthermore, National Health Expenditures are projected to reach USD 6,192.5 Billion in 2028, where the per capita expenditure is estimated to touch USD 17,611 in the same year. These are notable indicators that are anticipated to create lucrative business opportunities in upcoming years.

Regionally, the global adhesion barriers market is studied into five major regions including North America, Europe, Asia Pacific, Latin America, and Middle East & Africa region. Amongst these markets, the market in North America region is projected to hold the largest market share by the end of 2033. This can be attributed to the growth in surgeries performed in the United States, the rise in the number of elderly people, and the growing emergence of chronic diseases including cancer and gynecological disorders in the region. According to the Centers for Disease Control and Prevention, in 2019, in the USA around 1,368 women (0.6 per 100,000 women) were diagnosed with vaginal cancer and it has claimed the lives of 431 women (0.2 per 100,000 women) in the same year.

The global adhesion barriers market is further classified on the basis of region as follows:

Our in-depth analysis of the global adhesion barriers market includes the following segments:

What are the major factors driving the growth of the adhesion barriers market?

Increasing usage of adhesion barriers products owing to rising abdominal surgeries among the geriatric population and growing gynecological diseases are the main factors driving the growth of the adhesion barriers market.

What would be the CAGR of adhesion barriers market over the forecast period?

What are the challenges affecting the adhesion barriers market growth?

Reluctance of surgeons to use adhesion barriers and difficulty in getting market approval due to lack of awareness among the people.

Which region will provide more business opportunities for growth of adhesion barriers market in future?

Who are the major players dominating the adhesion barriers market?

What are the segments in the adhesion barriers market?

The market is segmented by type, delivery mode, application, and by region.

Which segment captures the largest market size in the application segment in the adhesion barriers market?

The general/abdominal surgeries segment is anticipated to garner the largest market size by the end of 2033 and display significant growth opportunities.