The Western Europe intraoperative neuromonitoring (IONM) electromyograph (EMG) devices market is estimated to garner a revenue of USD 140650 Thousands by the end of 2029, up from a revenue of USD 73902.2 Thousands in 2020, by growing with a CAGR of 7.4% during the forecast period, i.e., 2020-2029. The growth of the market can primarily be attributed to the increasing efficacy of IONM, and the rising use of IONM in various surgeries, including spine, vascular, and ENT surgeries. IONM is used to reduce the risk of damage to the nervous system during surgeries, especially for thyroid and parathyroid surgeries. Moreover, the increasing cases of recurrent laryngeal nerve (RLN) injury, which is also known to be one of the highly reported and life-deteriorating complications in the thyroid and parathyroid surgery, is also anticipated to drive the market growth during the forecast period. 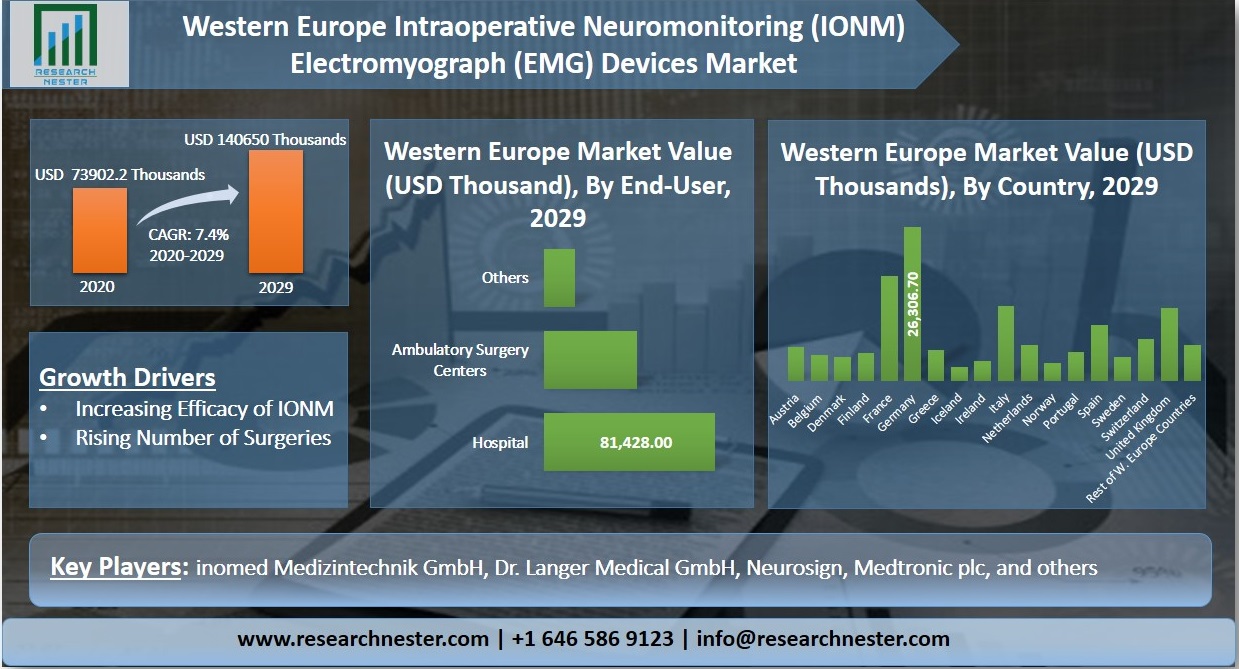 The Western Europe intraoperative neuromonitoring (IONM) electromyograph (EMG) devices market is also anticipated to grow on account of the growing incidences of thyroid cancer across Europe, along with the increasing number of medical procedures performed in several countries in the region. According to the statistics by the International Agency for Research on Cancer, the number of new cases of thyroid cancer amongst males between the age group of 0 to over 85 years in Europe, is estimated to grow to 20.1 Thousands by the end of 2040, up from 19.3 Thousands in 2020. Moreover, mortality due to thyroid cancer amongst males and females is anticipated to touch 3.1 Thousands and 5.2 Thousands respectively by the end of 2040, up from 2.4 Thousands and 4.0 Thousands respectively in 2020. 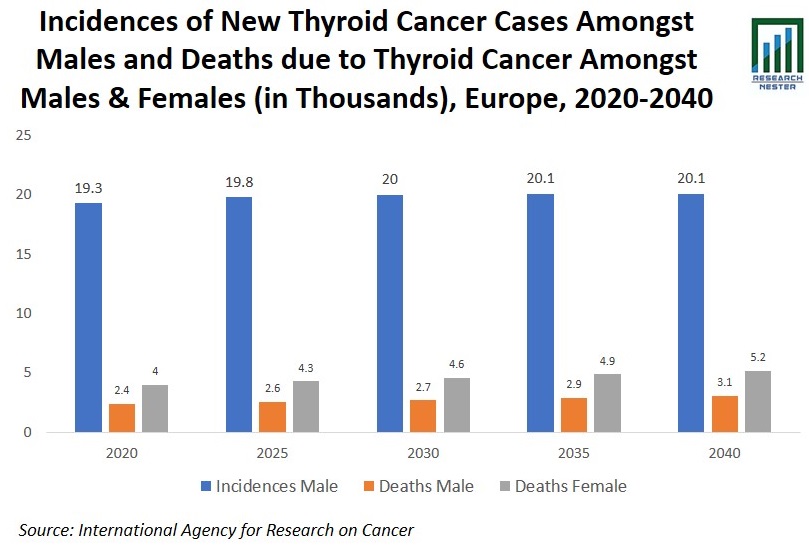 The Western Europe intraoperative neuromonitoring (IONM) electromyograph (EMG) devices market is segmented by country into Austria, Belgium, Denmark, Finland, France, Germany, Greece, Iceland, Ireland, Italy, Netherlands, Norway, Portugal, Spain, Sweden, Switzerland, United Kingdom, and the Rest of Western Europe countries. Amongst these countries, the market in Germany is anticipated to hold the highest market share throughout the forecast period. The market in the country garnered a revenue of USD 12267.7 Thousands in the year 2020, and is further projected to reach USD 26306.7 Thousands by the end of 2029. The market in the region is further projected to grow with the highest CAGR of 8.8% during the forecast period. The growth of the market in the country can be primarily attributed to the growing healthcare expenditure in Germany, along with the increasing number of electromyography surgeries in the country. According to the statistics by the World Bank, the current health expenditure (% of GDP) in Germany increased from 9.888% in the year 2000 to 11.43% in the year 2018. Moreover, according to the statistics by the Statistisches Bundesamt, electromyography (EMG) surgeries and medical procedures performed on full-time in-patients in Germany registered to 64,896 numbers by the end of 2019. On the other hand, the market in France is anticipated to grab the second-leading market share and further generate a market revenue of USD 17939.1 Thousands by the end of 2029, up from USD 8868.2 Thousands in 2020.

1) What are the major factors driving the growth of the Western Europe intraoperative neuromonitoring electromyograph devices market?

Ans: The increasing efficacy of IONM is one of the major factors anticipated to drive the market growth.

2) What would be the CAGR of Western Europe intraoperative neuromonitoring electromyograph devices market over the forecast period?

Ans: The high price of IONM is one of the major factors estimated to hamper the market growth.

Ans: The market in France is anticipated to display significant business opportunities in the future.

Ans: The major players in the market are inomed Medizintechnik GmbH, Dr. Langer Medical GmbH, Neurosign, Medtronic plc, and others.

7) What are the segments in the Western Europe intraoperative neuromonitoring (IONM) electromyograph (EMG) market?

Ans: The market is segmented by device type, procedure, EMG types, end-user, and by region.

Ans: The hospital segment is anticipated to hold largest market revenue of USD 81428 Thousand by the end of 2029 and display significant growth opportunities.