The global vertebrobasilar artery syndrome treatment market is estimated to grow at a notable CAGR over the forecast period, i.e., 2022 – 2030. The growth of the market can be attributed to the degrading lifestyle practices amongst the global population, such as, smoking, lack of physical activities, high-cholesterol diet and others. Vertebrobasilar arteries are the arteries located at the back of the brain, which supply oxygen to the posterior of the brain. These arteries get blocked due to cholesterol buildup, which limits or blocks the blood supply to the brain, causing vertebrobasilar artery syndrome. This can be treated and controlled by changing lifestyle, combined with medications. However, bypass surgery is required for serious cases. Age plays a major role in vertebrobasilar artery syndrome owing to the degenerative conditions of the body, and it is common in individual above the age of 50 years. Rising geriatric population of the world is estimated to boost the market growth. According to the data by the World Bank, the global population above 64 years crossed 722.133 million in 2020. 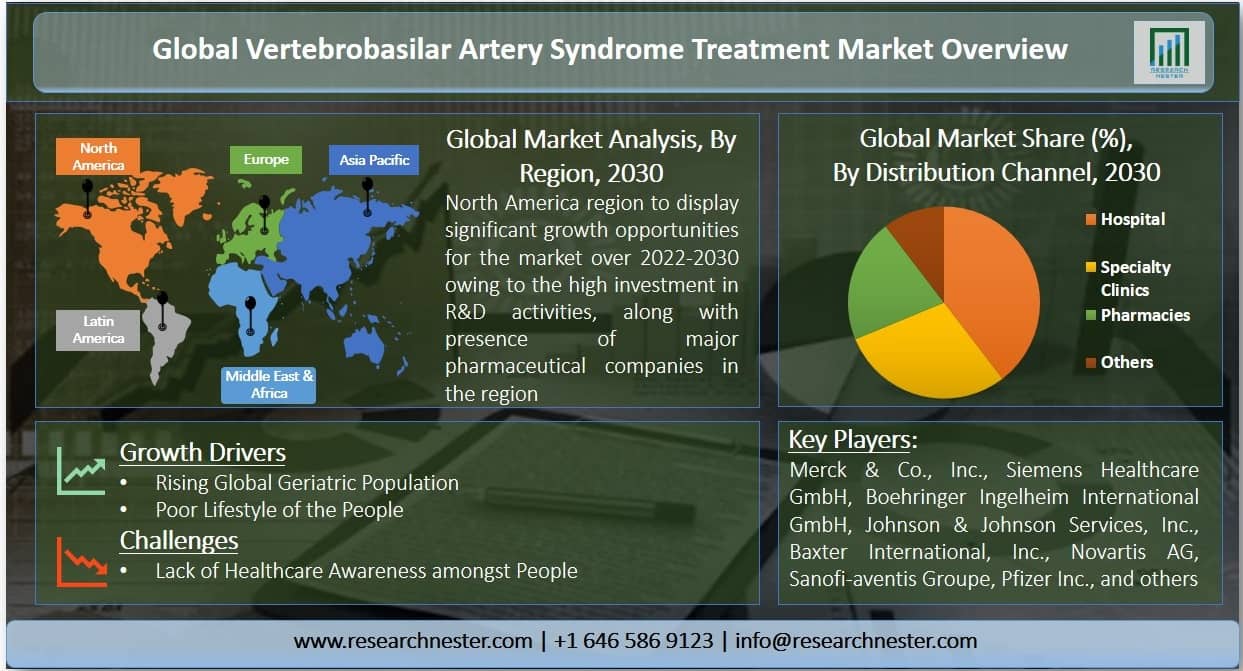 The market is bifurcated by treatment into surgery and medication, out of which, the medication segment is anticipated to hold the leading revenue share in the global vertebrobasilar artery syndrome treatment market over the forecast period as drugs are preferred by doctors to treat the vertebrobasilar artery syndrome, owing to the less risk, lower cost, and easy administration of medicines over surgery.

On the basis of geographical analysis, the global vertebrobasilar artery syndrome treatment market is segmented into five major regions including North America, Europe, Asia Pacific, Latin America and Middle East & Africa region. The market in Asia Pacific region is forecasted to witness substantial growth during the forecast period on the back of emergent healthcare infrastructure and improvement in medical facilities in developing nations, such as, India, China, Bangladesh, Singapore, and Indonesia, among others. In addition to this, the high geriatric population in the APAC region is estimated to boost the market growth. According to the data by the World Bank, 6.574% of the total population of India aged above 65 years, in 2020, while the same value for China is 11.96% of the total population. Moreover, favorable market policies in these countries, attracting international investment, along with the growing disposable income are estimated to boost the market growth. 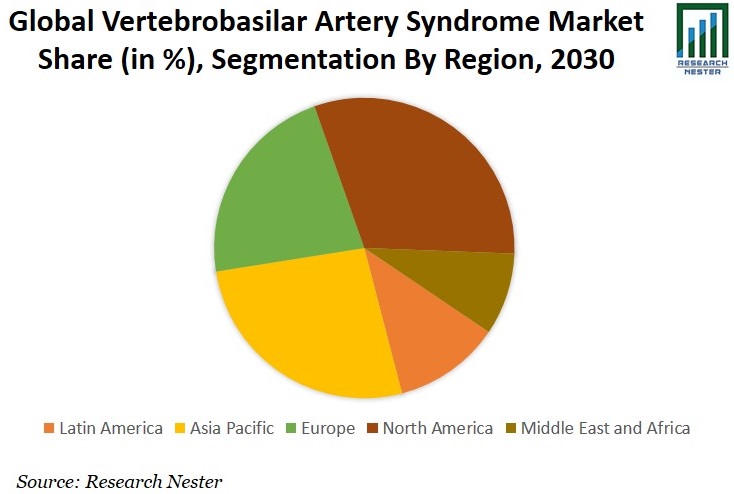 The global vertebrobasilar artery syndrome treatment market is further classified on the basis of region as follows:

1) What are the major factors driving the growth of the vertebrobasilar artery syndrome treatment market?

Ans: Lifestyle diseases and poor healthcare habits, especially amongst the younger generation, is estimated to drive the market growth.

2) What would be the CAGR of vertebrobasilar artery syndrome treatment market over the forecast period?

3) What are the challenges affecting the vertebrobasilar artery syndrome treatment market growth?

Ans: Lack of health awareness amongst people is estimated to hamper the market growth.

Ans: The North America region is estimated to gain the largest market share owing to the high investment in R&D activities, along with presence of major market players in the region.

5) Who are the major players dominating the vertebrobasilar artery syndrome treatment market?

7) What are the segments in the vertebrobasilar artery syndrome treatment market?

Ans: The market is segmented by diagnosis, treatment, distribution channel, and by region.

Ans: The hospitals segment is anticipated to hold largest market size over the forecast period and display significant growth opportunities.