The global post-polio syndrome treatment market is estimated to grow at a modest CAGR over the forecast period, i.e., 2022 – 2030. The growth of the market can be attributed to the high prevalence of polio in underdeveloped countries, due to unavailability of polio vaccines in low-income economies. Polio was once a deadly disease, causing mass deaths and paralysis, but cases of polio have been a rarity after the development of polio vaccines, especially in developed countries. The World Health Organization (WHO) reported around 175 active polio cases in 2019. However, the prevalence of polio is high in underdeveloped countries, due to lack of efficient healthcare facilities, which is estimated to boost the market growth. Post-polio syndrome surfaces up decades after the initial infection, which is generally after the age of 30 years. The symptoms of this syndrome are severe and require continuous medication and other treatment, which is estimated to boost the growth of the market. Moreover, the developing public healthcare infrastructure and high government expenditure for the development of new drugs is anticipated to significantly fuel the growth of the market. 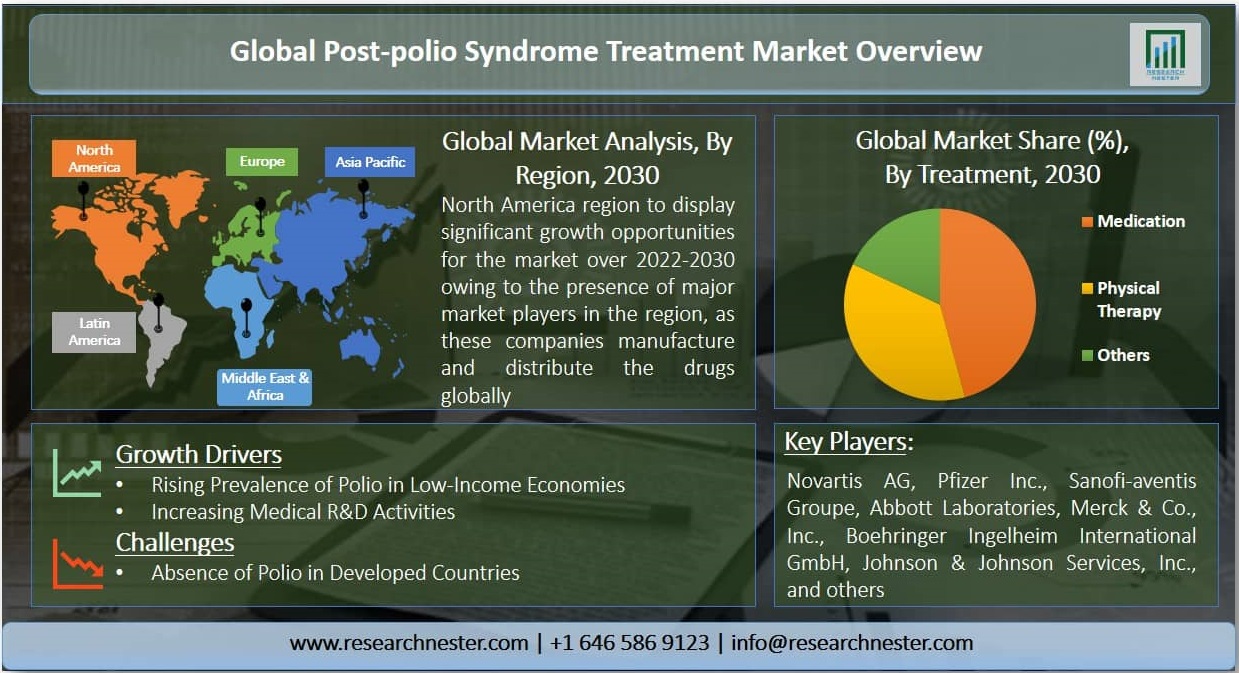 The market is segmented by treatment into medication, physical therapy, and others, out of which, the medication segment is anticipated to hold the largest share in the market over the forecast period on account of increasing use of painkillers and anticonvulsant drugs to curb the symptoms of post-polio syndrome. Drugs are given to relieve muscle and join pain and breathing difficulties, which is estimated to boost the segment growth.

On the basis of geographical analysis, the global post-polio syndrome treatment market is segmented into five major regions including North America, Europe, Asia Pacific, Latin America and Middle East & Africa region. The market in the North America region is anticipated to gain notable market share throughout the forecast period on account of presence of major pharmaceutical companies, and increasing research activities for the development of new drugs. The first polio vaccine was given in the United States in 1955, and US has been polio-free since 1979, according to the data by the Center for Disease Control and Prevention. However, the pharmaceutical industry in this region manufactures major amount of post-polio syndrome treatment drugs and medications, which is estimated to boost the market growth.

On the other hand, poor economies in Middle East and Africa and Asia Pacific are the worst affected by poliovirus, and hence, have major growth opportunities for post-polio syndrome treatment market. The market in the Middle East and Africa region is estimated to gain significant growth over the forecast period, owing to the lack of proper public healthcare system in the region, leading to rising prevalence of polio. 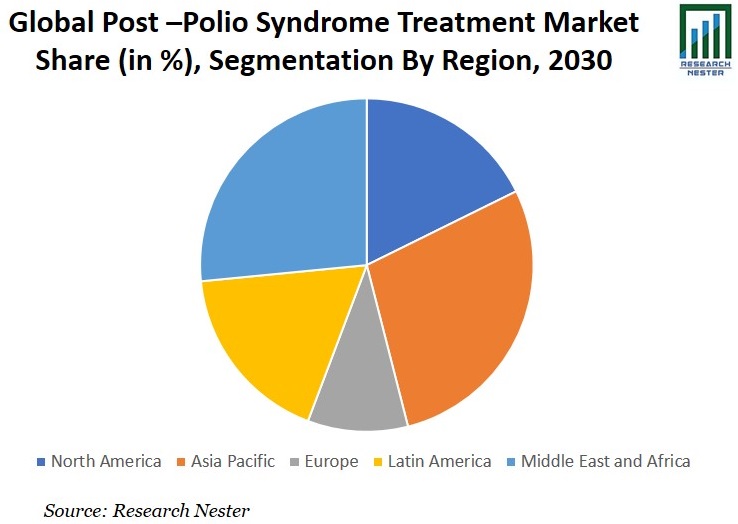 The global post-polio syndrome treatment market is further classified on the basis of region as follows:

1) What are the major factors driving the growth of the post-polio syndrome treatment market?

Ans: The increasing prevalence of polio in underdeveloped countries, and requirement of constant treatment in form of drugs and therapy in post-polio syndrome to boost the market growth.

2) What would be the CAGR of post-polio syndrome treatment market over the forecast period?

3) What are the challenges affecting the post-polio syndrome treatment market growth?

Ans: The eradication of polio from developed countries is estimated to hamper the market growth.

4) Which region will provide more business opportunities for growth of post-polio syndrome treatment market in future?

Ans: The market in the North America is estimated to witness growth with highest CAGR over the forecast period, owing to the efficient healthcare system, and high healthcare expenditure.

5) Who are the major players dominating the post-polio syndrome treatment market?

7) What are the segments in the post-polio syndrome treatment market?

Ans: The market is segmented by symptoms, treatment, and by region.

8) Which segment captures the largest market size in the treatment segment in the post-polio syndrome treatment market?

Ans: The medication segment is anticipated to hold largest market size over the forecast period owing to the growing need for pain killers to relieve the symptoms.