The global vein illuminator device market is estimated to garner significant revenue by the end of 2031 by growing at a CAGR of ~30% over the forecast period, i.e., 2022 – 2031. Further, the market generated modest revenue in the year 2021. The growth of the market can be attributed to the rising geriatric population and the increasing prevalence of chronic conditions among the population. It was observed that about 16 million deaths were caused by cardiovascular diseases, cancer caused around 9000 deaths while due to respiratory diseases, approximately 4000 people died in 2019, A higher prevalence was found among women, older adults, and rural residents. 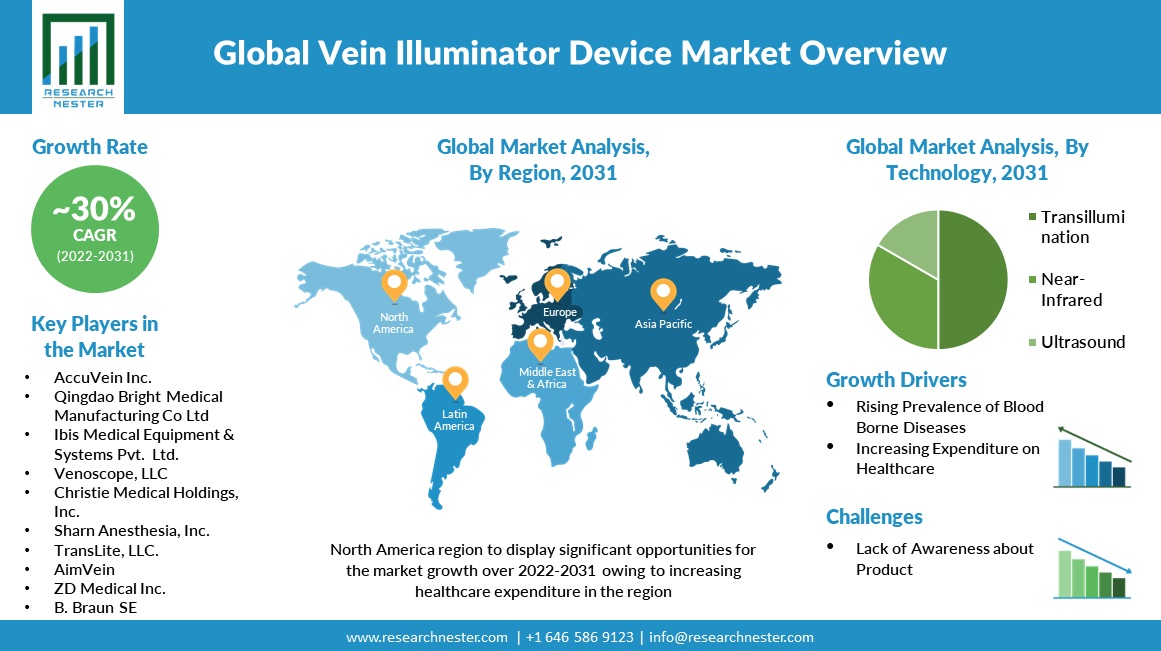 Anemia, which is a major global health concern, is known to primarily affect children and pregnant women. A staggering 42% of children less than 5 years old and 40% of pregnant women are stated to be living with anemia across the globe.

The rising cases of blood diseases such as anemia, leukocytosis, and hemophilia requires lengthy blood treatment regimens which is expected to fuel the demand for vein illuminator devices over the forecast period.

According to Centers for Disease Control and Prevention the prevalence of obesity in the US increased from 30.5% in 1999-2000 to 41.9% in 2017-2020. A similar increase of 4.7% in the prevalence of severe obesity occurred during the same period.

The market is segmented by technology into transillumination, near-infrared, and ultrasound. Out of these, the transillumination segment is anticipated to capture the largest market size in the global vein illuminator device market on account of extensive usage of the transillumination vein locators for peripheral venous line procedures. It is observed, that the success rate of cannulation was significantly higher in the US group (~80%) than in the Veinlite group (~55%), about 90% of the US group and around 80% of the Veinlite group achieved good overall success rates. Moreover, the adoption of this technology is rapidly increasing owing to its benefits, including less pain, precise vein identification, and reduced risk of bruising and bleeding. Therefore, these technological benefits are expected to contribute to segment growth over the forecast period.

Regionally, the global vein illuminator device market is segmented into five major regions including North America, Europe, Asia Pacific, Latin America and Middle East & Africa region. Amongst these markets, the market in North America region is estimated to hold the largest market share by the end of 2031 on the back of the strong healthcare industry and increasing healthcare expenditure in the region. According to data released by the Centers for Medicare & Medicaid Services, United States health care expenditure reached USD 4.1 trillion in 2020. In addition, the demand for vein illuminators is expected to grow over the forecast period owing to the increasing geriatric population in the region as well as the large usage of vein illuminators during venipuncture. According to the data provided by World Bank, the geriatric population in United States is stated to reach 56,545,938 in 2021.  Furthermore, the presence of major established market players in the region is also projected to drive the vein illuminator devices market during the forecast period 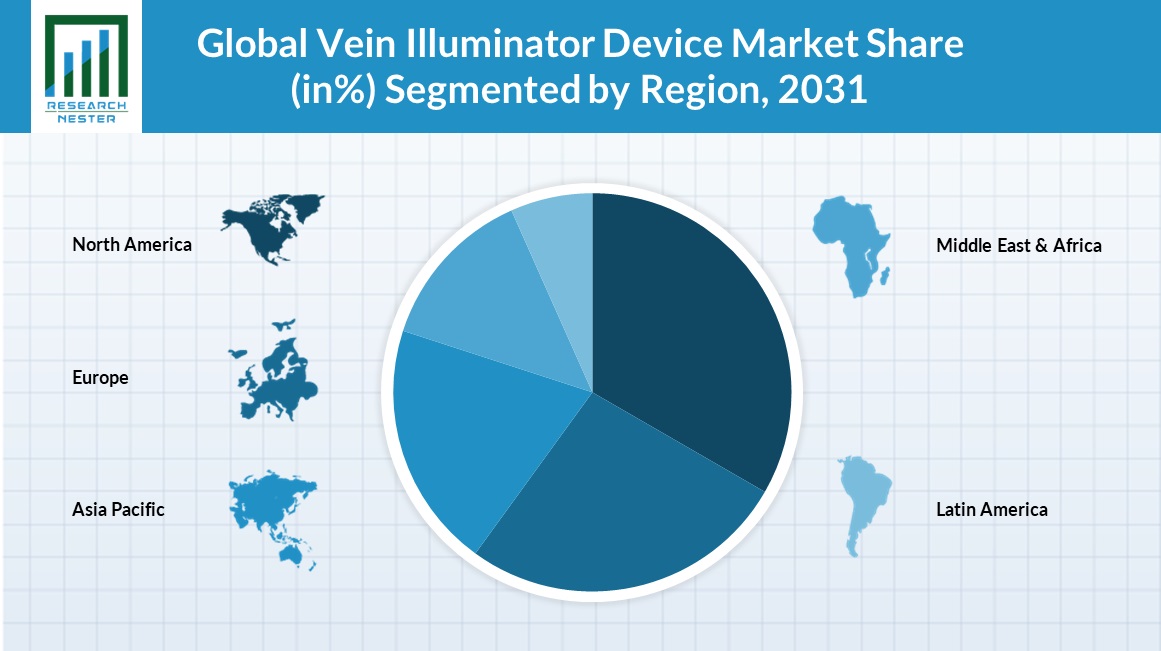 The global vein illuminator device market is further classified on the basis of region as follows:

What are the major factors driving the growth of the vein illuminator device market?

What would be the CAGR of vein illuminator device market over the forecast period?

What are the challenges affecting the vein illuminator device market growth?

High cost associated with product and lack of awareness vein illuminator device of among people are expected to hamper the market growth.

Which region will provide more business opportunities for growth of vein illuminator device market in future?

Who are the major players dominating the vein illuminator device market?

What are the segments in the vein illuminator device market?

The market is segmented by technology, application, end user and by region.

Which segment captures the largest market size in technology in the vein illuminator device market?

The transillumination segment is anticipated to garner the largest market size by the end of 2031 and display significant growth opportunities.