The United States & Europe professional cycling apparels market is estimated to garner a market revenue of USD 1825.71 Million by the end of 2028 from a revenue of USD 1256.15 Million in 2019, by growing with a CAGR of 5.32% during the forecast period, i.e., 2020-2028. The growth of the market in the regions can be attributed to the increasing number of cyclists, along with the growing number of cycling events, which is driving the demand for cycling apparels. Further, increasing availability of cycling apparels in online stores, backed by the rising sales of e-commerce industries, is also anticipated to create numerous opportunities for market growth. On the other hand, rapid advancements in the clothing material of these apparels through extensive research and developments, is also anticipated to drive the market growth during the forecast period. 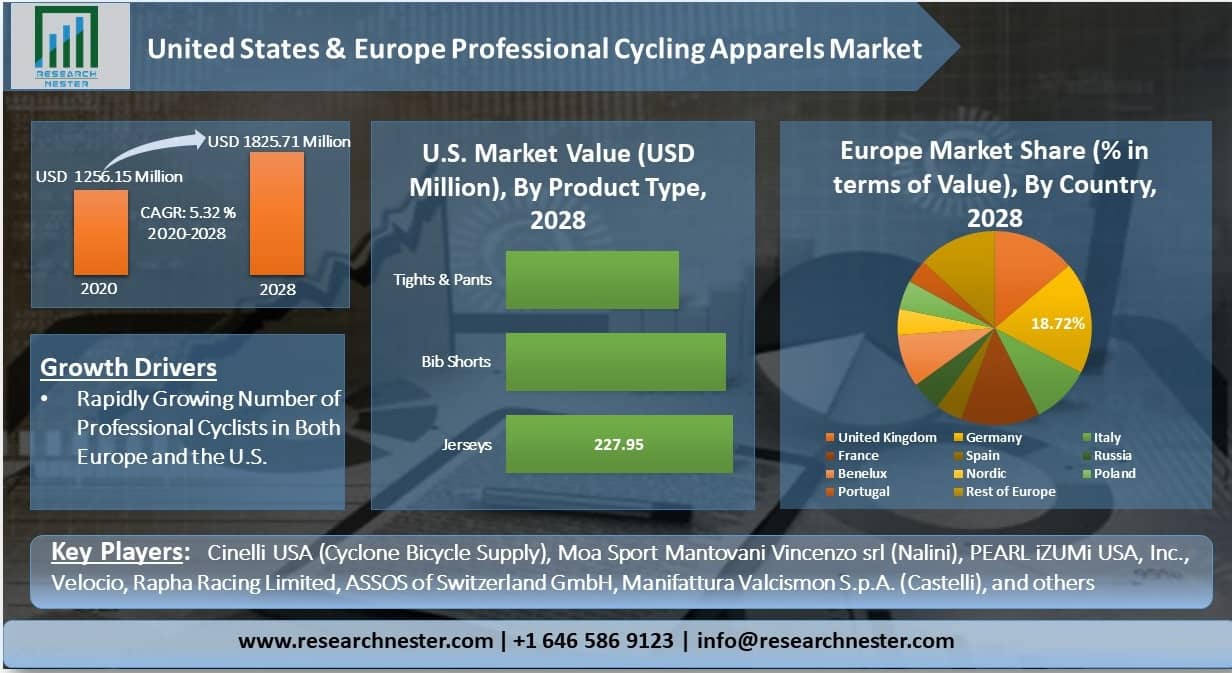 In Europe, especially due to the impact of the COVID-19 pandemic, a massive surge in the use of cycles have been witnessed in the year 2020. According to the statistics by the Department for Transport of the Government of United Kingdom, the traffic of cyclists on public highways and paths next to them in Great Britain, witnessed an increase by 45.7% above the 2019 levels. The statistics also stated that this was the highest level of cycling monitored in Great Britain since the 1960s. The traffic registered from cyclists was 5.0 billion vehicle miles (bvm). 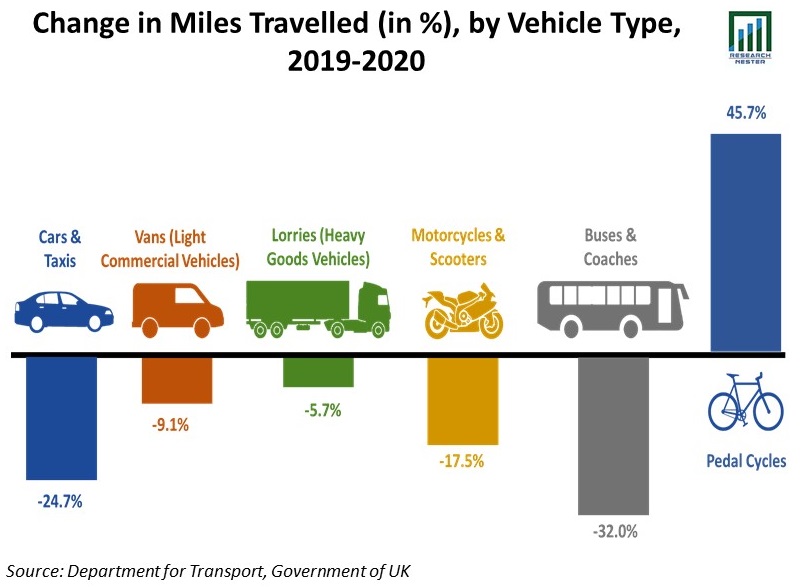 Further, growing investments in both the regions to develop the cycling infrastructure, is also anticipated to contribute to the market growth. The European Union recently announced investments worth USD 3.68 Billion during the financial period 2021-2027 from its EU funds to support the EU Cycling Strategy. Furthermore, growing popularity of adventure sports amongst sports and adventure enthusiasts, along with the numerous international cycling events planned ahead, such as Tour de Singkarak, Tour de Flores, Tour de Siak, and others, along with the upcoming Olympic games coming up in Paris in 2024, in Milano Cortina (Italy) in 2026, and in Los Angeles (California) in 2028, are some of the additional factors anticipated to drive the market growth during the forecast period. The market is also projected to grow on account of the growing awareness amongst individuals for cycling as sports, and for the availability of professional infrastructure for cycling in both Europe and the United States.

The professional cycling apparels market in the United States is anticipated to grow with a CAGR of 4.69% during the forecast period. Alternatively, the market in Europe is expected to garner a revenue of USD 1203.05 Million by the end of 2028. The growth of the market in the region can be attributed to the rising frequency of cyclists in various small and medium sized cities, as well as for the growing awareness amongst individuals for cycling as a career. Moreover, several countries in the region are also known for holding annual cycling events, which is expected to drive the demand for cycling jerseys and other cycling apparels. The market in the region is further segmented by country into United Kingdom, Germany, Italy, France, Spain, Russia, Benelux, Nordic, Poland, Portugal, and Rest of Europe. Amongst these countries, the market in Germany is anticipated to hold the largest market share of 18.72% and further attain a market revenue of USD 225.21 Million by the end of 2028. The market in France, on the other hand, is expected to grow with the highest CAGR of 6.14% during the forecast period.

What are the major factors driving the growth of the market?

The rising number of professional cyclists in Europe and the U.S., along with the numerous cycling events lined up in the coming years, are some of the major factors anticipated to drive the market growth.

What would be the CAGR of market over the forecast period?

The presence of counterfeit products is one of the major factors estimated to hamper the market growth.

Who are the major players dominating the market?

What are the segments in the United States & Europe professional cycling apparels market?

The market is segmented by product type, sales channel, and by country.