The tonsillitis treatment market is estimated to garner a hefty amount of revenue by growing at a significant CAGR over the forecast period, i.e., 2022 – 2030. The growth of the market can be attributed to the rising incidences of flu around the world and high germ exposure of people living in under-developed nations. On an average, in the United States, 5% to 20% of the population gets the flu. The disease results in more than 32 million people outpatient visits each year. Along with these, growing prevalence of infections caused by virus and bacteria, detrimental changes in the lifestyle and increasing shift towards unhealthy eating habits among people are also expected to drive market growth in the near future. Furthermore, escalating government initiatives to spread awareness about antibiotic and over-the-counter treatment in rural and semi-urban areas is projected to provide ample growth opportunities to the market in the forthcoming years. 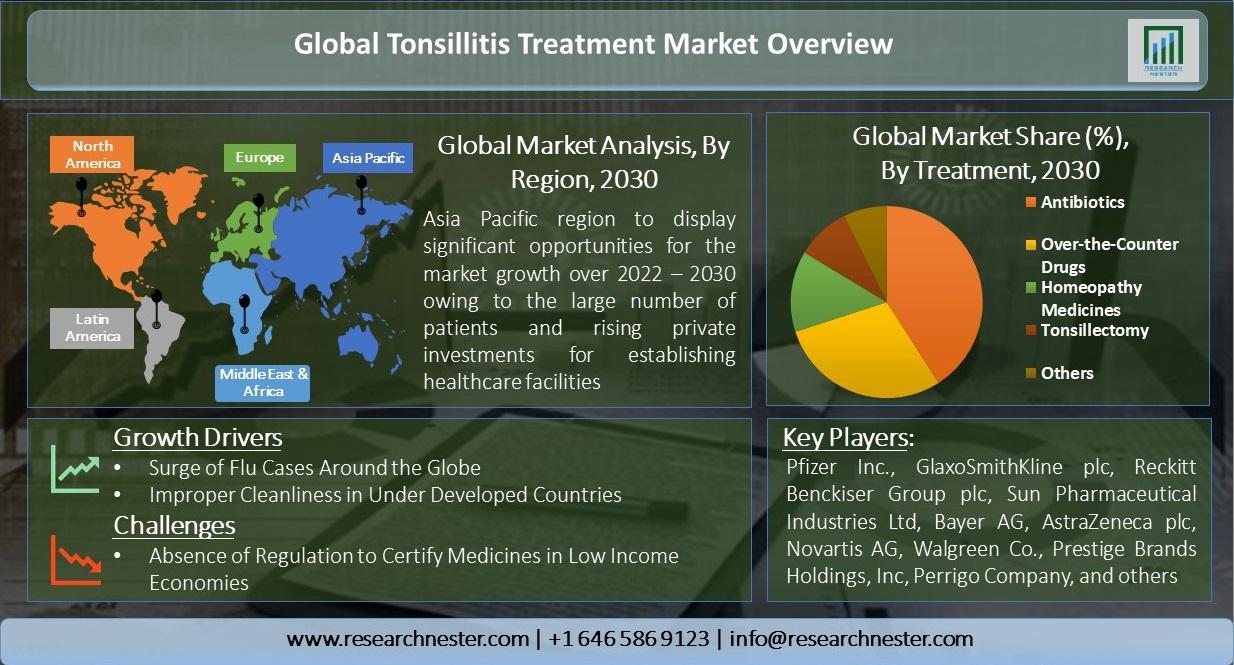 The market is segmented by treatment into antibiotics, over-the-counter drugs, homeopathy medicines, tonsillectomy and others, out of which, the antibiotics segment is anticipated to hold the largest share in the tonsillitis treatment market on account of the characteristics of these drugs such as slowing down infection growth, speedy recovery, prevention of occurrence of infection and ease of consumption. According to the Centers for Disease Control and Prevention (CDC), 266.1 million courses of antibiotics are dispersed to outpatients in U.S. community pharmacies. Moreover, the segment for over-the-counter drugs is predicted to witness noteworthy growth over the forecast period, which can be credited to the increasing usage of these medication for treating ailments in children and young teenagers. Apart from these, the effectiveness of these medication in relieving symptoms caused by viral infections are also assessed to fuel the growth of this market segment in the future. CLICK TO DOWNLOAD SAMPLE REPORT

On the basis of geographical analysis, the tonsillitis treatment market is segmented into five major regions including North America, Europe, Asia Pacific, Latin America and the Middle East & Africa. The market in North America region is estimated to occupy the largest share over the forecast period on the back of presence of well-established healthcare facilities, major market players and high levels of awareness regarding different medications in the region. In addition to these, high government spending on the healthcare sector is also expected to fuel the region’s market growth in the coming years. Moreover, the market in Asia Pacific is anticipated to witness noteworthy growth during the forecast period, which can be ascribed to the large patient pool, improper maintenance of cleanliness in South Asian countries and increasing private investments for establishment of hospitals in the region. As per a report by UNICEF, India accounted for 90% of the people in South Asia and 1.2 billion people in the world that defecated in the open. This situation contributed to the deaths of 100,000 children under five years in the country.

The tonsillitis treatment market is further classified on the basis of region as follows:

Our in-depth analysis of the tonsillitis treatment market includes the following segments:

What are the major factors driving the growth of the tonsillitis treatment market?

The major growth drivers for the market are increasing number of incidences of flu around the world and high germ exposure of people in under developed nations.

What would be the CAGR of tonsillitis treatment market over the forecast period?

What are the challenges affecting the tonsillitis treatment market growth?

Lack of regulations for the certification of medications in lower income economies is estimated to hamper the market growth.

Which region will provide more business opportunities for growth of tonsillitis treatment market in future?

Asia Pacific will provide more business opportunities on the back of large patient pool and increasing private investments for establishment of hospitals in the region.

Who are the major players dominating the tonsillitis treatment market?

What are the segments in the tonsillitis treatment market?

The market is segmented by disease type, disease cause, treatment, and by region.

Which segment captures the largest market size in the treatment segment in the tonsillitis treatment market?

The antibiotics segment is anticipated to hold largest market size and is estimated to grow at a notable CAGR over the forecast period and display significant growth opportunities.