·    September 2020- Aspen Global Incorporated announced that it has divested its wholly owned subsidiary incorporated in Mauritius with Mylan Ireland Limited. The latter will acquire all the intellectual property related to Aspen’s Thrombosis Business in Europe1.

The global thrombophilia treatment market is estimated to garner a large amount of revenue by growing at a significant CAGR over the forecast period, i.e., 2022 – 2030. The growth of the market can be attributed to the growing burden of obesity, and increasing prevalence of cardiovascular and trauma cases across the world. According to the World Health Organization, as of now, cardiovascular diseases account for about 17.9 million deaths, which is an estimated 32 percent of all the deaths globally.

Along with these, rise in consumption of alcohol and tobacco is predicted to add a risk of development of high blood pressure on veins leading to several thrombophilia complications, which in turn is expected to fuel the market growth in the upcoming years. Furthermore, escalating research and development spending in the field of hematological diseases, and government initiatives to raise awareness regarding blood disorders are projected to offer profitable opportunities to the market in the near future. 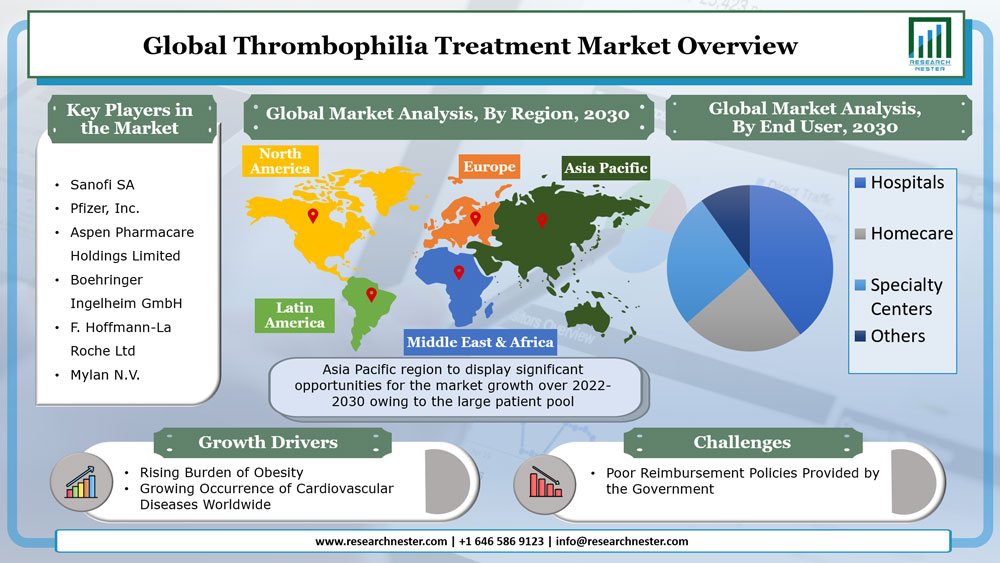 The market is segmented by end user into hospitals, homecare, specialty centers, and others, out of which, the hospitals segment is anticipated to hold the largest share in the global thrombophilia treatment market. This can be accounted to the high preference of patients to get their treatment by a healthcare professional operating in a hospital facility, and increase in the number of hospital admissions. Additionally, on the basis of type, the factor V Leiden segment is evaluated to acquire the largest share during the forecast period, which can be credited to the commonness of this type of thrombophilia among the general population. Apart from this, the upsurge in the number of people with genetic mutations around the globe is also assessed to drive growth to the market segment in the imminent time.  CLICK TO DOWNLOAD SAMPLE REPORT

On the basis of geographical analysis, the global thrombophilia treatment market is segmented into five major regions including North America, Europe, Asia Pacific, Latin America and the Middle East & Africa region. The market in the Asia Pacific is estimated to witness noteworthy growth over the forecast period on the back of the growing investments for improving healthcare infrastructure, and larger patient pool in the region. Moreover, the market in North America is expected to occupy the largest share during the forecast period ascribing to the rising demand for progressive treatment options, and early adoption of technologies, especially in the United States. In addition, increasing geriatric population, and growing collaboration of domestic and international companies for awareness campaigns are also predicted to boost the region’s market growth in the coming years. As per the data given by Rural Health Information Hub, there are more than 46 million adults aged 65 years or older living in the United States as of 2019. By 2050, this number is anticipated to reach almost 90 million. 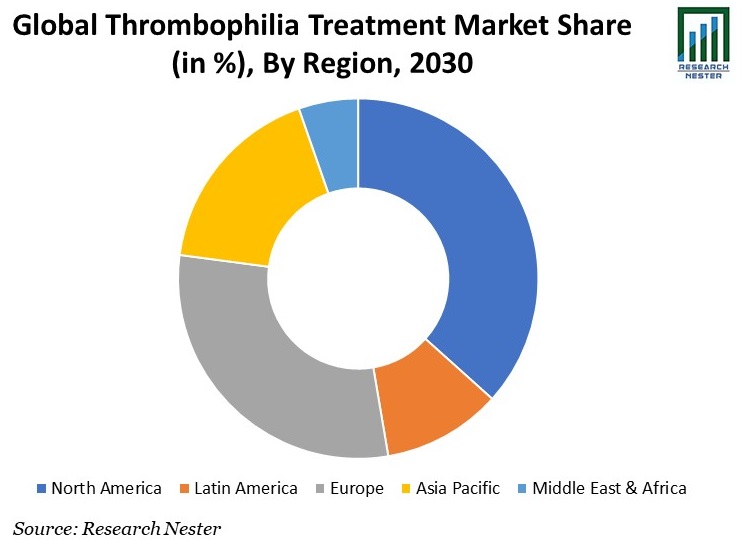 The global thrombophilia treatment market is further classified on the basis of region as follows:

Our in-depth analysis of the global thrombophilia treatment market includes the following segments:

What are the major factors driving the growth of the thrombophilia treatment market?

The major factors driving market growth are growing burden of obesity, and increasing prevalence of cardiovascular and trauma cases worldwide.

What would be the CAGR of thrombophilia treatment market over the forecast period?

What are the challenges affecting the thrombophilia treatment market growth?

Poor reimbursement policies provided by government is estimated to hamper the market growth.

Which region will provide more business opportunities for growth of thrombophilia treatment market in future?

Asia Pacific will provide more business opportunities for market growth owing to the growing investments for improving healthcare infrastructure, and larger patient pool in the region.

Who are the major players dominating the thrombophilia treatment market?

The major players in the market are Sanofi SA, Pfizer, Inc., Aspen Pharmacare Holdings Limited, Boehringer Ingelheim GmbH, and others.

What are the segments in the thrombophilia treatment market?

The market is segmented by type, drugs, end user, and by region.

Which segment captures the largest market size in the end user segment in the thrombophilia treatment market?