In today’s world, people are more aware and conscious regarding health and wellness which is leading them to adopt different fitness activities. This has furthered the interest of people towards outdoor sports such as football, baseball, volleyball, cricket, basketball and other sports activities. Apart from this, the growing fan base of different teams and games due to increasing advertisement of those teams and games through different channels coupled with easy availability of sports wear and accessories are believed to flourish the growth of the global team sports market with a CAGR of 8.1% over the forecast period. The global team sports market reached USD 13,700.0 Million in 2016 and is expected to reach USD 25,346.5 Million by the end of 2024. Further, the frequent international sports events and growing popularity of team sports around the globe are also believed to supplement the growth of the global team sports market in the near future.

Further, Europe held the second largest share in overall team sports market in 2016, followed by Asia-Pacific. Europe team sports market is believed to behold its positive growth in upcoming years owing to the presence of major players in the region, whereas the government funding to encourage the adoption of sports is expected to fuel the demand for team sports in the Asia Pacific region with highest CAGR of 10.6% over the forecast period.CLICK TO DOWNLOAD FREE SAMPLE 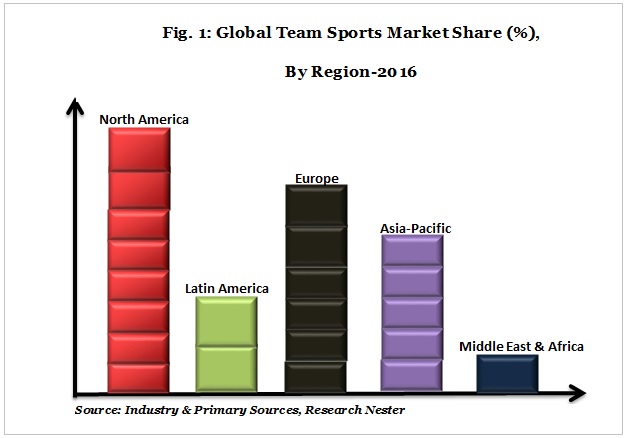 The global team sports market is segmented on the basis of sports into basketball, football, volleyball team sport, cricket, rugby and others. The football sport segment occupied the largest market with market share of 27.0% in 2016 and is predicted to account for the largest market size by the end of 2024 in overall team sports market around the globe. Followed by the football segment, the cricket sports segment is believed to garner second largest revenue by the end of 2024 by expanding at the highest CAGR of 9.4% over the forecast period. Further, the establishment of professional basketball leagues across the globe, opening of new basketball centers and rise in number of participants will drive the basketball segment to achieve Y-O-Y growth rate of around 7.4% in 2024. 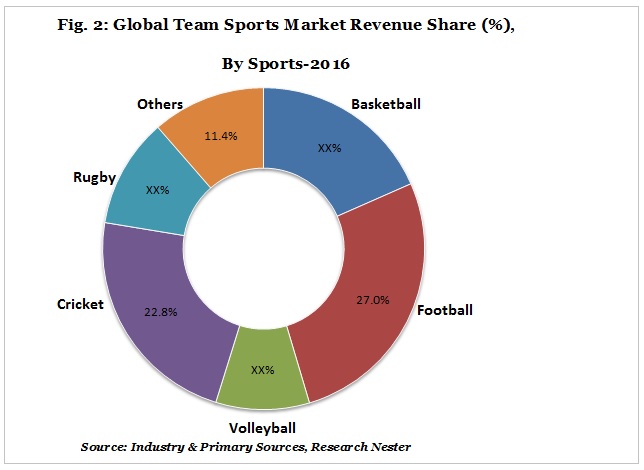 The global team sports market is divided by demography into male and female, out of which, the male segment with 64.5% market share in 2016 is anticipated to have largest share by the end of 2024, whereas the female segment is predicted to flourish with highest CAGR of 9.4% over the forecast period. With the growing pace of participation by women along with the major team sports leaders participating in promoting the sports and fitness accessories for women is expected to spur the growth of female segment which is further believed to achieve absolute $ opportunity of USD 4,624.2 Million between 2017 and 2024.

The global team sports market is riding on the back of increasing popularity of outdoor sports and other physical activities due to growing fitness and wellness awareness among people. Apart from this, there is an increase in the investment by team owners to provide high end services and high quality products to their team players such as foot wears and sports wears among other sports accessories combined with rising active sports participation rates across the globe especially with growing participation of female population in these events. These are the key factors that are fueling the growth of the global team sports market.

The major threat to the sports industry is the availability of the counterfeit products. Further, the rise in raw material prices along with less involvement of women in sports activities in emerging economies is predicted to obstruct the growth of the global team sports market in upcoming years.