·   January 05, 2021: Etihad Airways launched a New Year’s sale to offer two tickets for the price of one to a range of destinations flying from the UAE capital Abu Dhabi. The sale includes economy class and business class fares to nine destinations around the world. 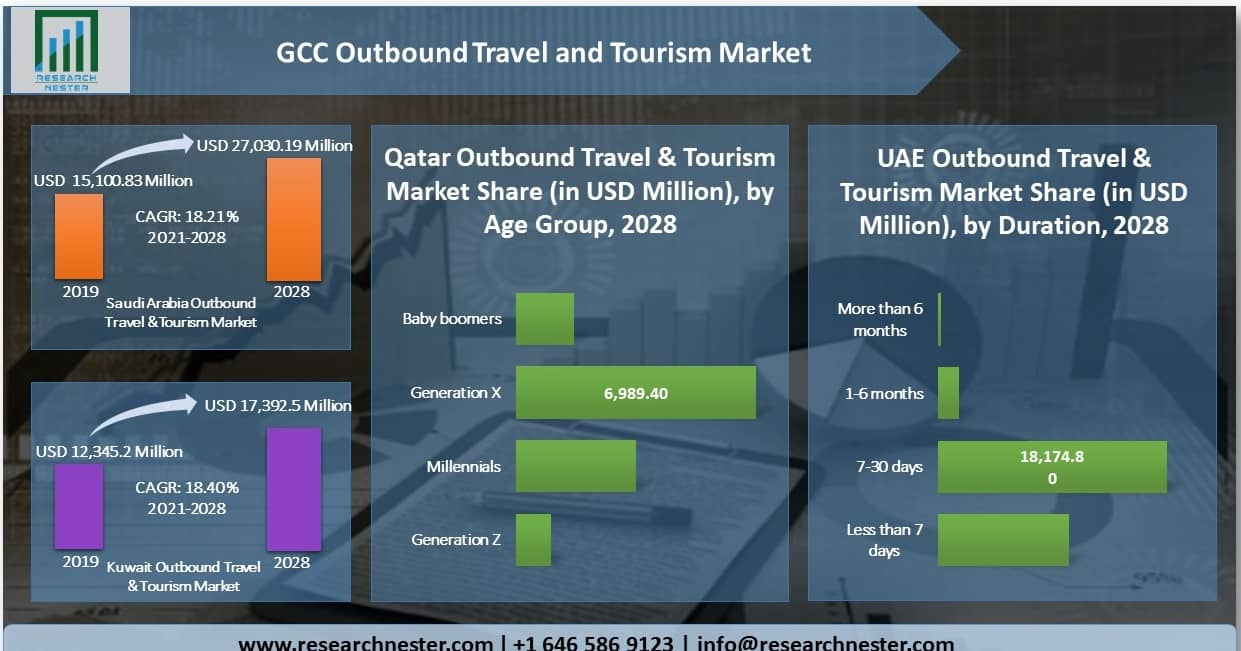 The growth of the market in these countries can be attributed to the growing economies of the nations, along with the rising disposable income of the population, which is leading to a direct increase in leisure activities including international travel. With growing disposable income, the average expenditure of travelers from these countries on tourism is also increasing, which is estimated to boost the market growth. According to the statistics by the World Bank, the GDP per capita (in current US$) in Qatar, UAE, Kuwait, and Saudi Arabia in the year 2019 was USD 62,088.062, USD 43,103.323, USD 32,000.448, and USD 23,139.799 respectively. This was an increase by USD 57,163.076, USD 38,141.847, USD 27,653.067, and USD 19879.298 respectively in the year 2016. CLICK TO DOWNLOAD SAMPLE REPORT 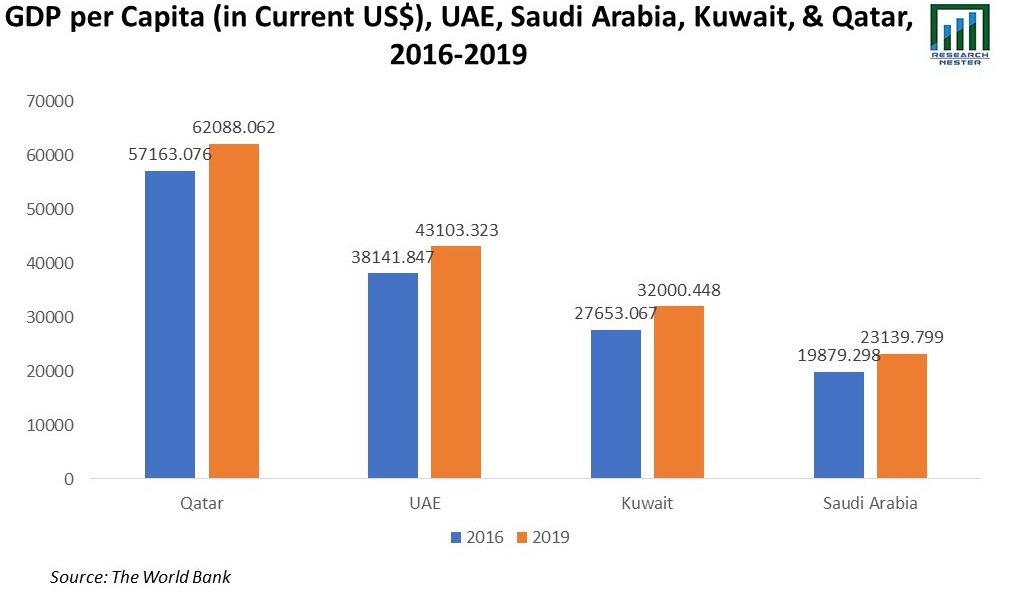 Moreover, decreased cost of international airfare, availability of affordable travel packages, and increasing number of direct flights to many destinations, along with the increasing trade and business relation between UAE, Qatar, Kuwait, Saudi Arabia and the rest of the world, is estimated to boost the market growth.

Regionally, the Saudi Arabia outbound travel and tourism market is segmented into five major regions, including North America, Europe, Asia Pacific, Latin America and the Middle East & Africa. The Saudi Arabia outbound travel and tourism to Europe segment which was valued at USD 7,361.7 million in 2019, is estimated to garner the largest revenue of USD 13,161 million by 2028, on the back of increasing leisure travel to colder European countries. Saudi Arabia experiences extremely warm temperature in the summer, which is why, travelers prefer to travel to European countries. On the other hand, the Asia Pacific segment is estimated to grow with the highest CAGR of 18.27% during the forecast period.

The UAE, Qatar and Kuwait outbound travel and tourism markets are segmented on the basis of regions into Saudi Arabia, United Kingdom, Germany, Italy, Switzerland, United States, India, Australia, Malaysia, Singapore, South Africa, and rest of the World. Out of these, in UAE, the Saudi Arabia segment is estimated to record the largest revenue of USD 11,410.3 million in 2028, up from USD 7606.3 million in 2019 owing to the increasing business travels amongst the countries. Moreover, in Qatar, the Saudi Arabia segment is projected to garner the largest revenue of USD 5542.6 million, by growing at the highest CAGR of 19.01% during the forecast period owing to the growing per capita income in Qatar, which is expected to promote leisure and religious travels from Qatar to Saudi Arabia. Similarly, in Kuwait, the Saudi Arabia segment is forecasted to grow at the highest CAGR of 19.02% over the forecast period and gain the largest revenue of USD 7252.7 million by 2028. The increasing millennial population, and changing lifestyle, along with escalating religious travel is anticipated to boost the market growth.

The GCC outbound travel and tourism market is segmented by duration, tourism type, age group, booking method, and spent type. Based on duration, the market is segmented into less than 7 days, 7-30 days, 1 – 6 months, and more than 6 months. The 7-30 days segment in all the four countries is expected to occupy a notable share by the end of 2028. In Saudi Arabia, the market segment is estimated to garner a revenue of USD 14,387.6 million in 2028, as this is the most preferred time period for most travelers. In UAE, the segment is predicted to gather a revenue of USD 18,174.8 million by 2028, up from USD 12,063.9 million in 2019, owing to the growing number of leisure travel from UAE to different parts of the world. In Qatar, the same segment is expected to acquire revenue of USD 7835 million by 2028 owing to the increase in MICE travels to developed nations. Similarly, the segment in Kuwait’s market is projected to garner a revenue of USD 10,748.6 million in 2028, by growing at a CAGR of 19.04% over the forecast period, owing to the high religious tourism related travel in the region.

On the basis of tourism type, the GCC outbound travel and tourism market is segmented into leisure, religious, cultural tourism, medical tourism, sports & adventure, MICE, and others, out of which, in Saudi Arabia, the leisure segment is anticipated to garner the largest market share over the forecast period. The segment is anticipated to occupy a revenue of USD 10,808.9 million by 2028, experiencing massive increase from USD 6043.3 million in 2019. The segment is expected to grow on the back of increasing disposable income and changing lifestyle of the country’s majority population. In UAE, the cultural tourism segment is anticipated to grow at the highest CAGR, i.e., 20.83% during the forecast period. Improving international relations with other gulf countries, and the rest of the world, along with surging penetration of social media are foreseen to drive the segment growth in this region. Similarly, the religious segment in Qatar’s market is projected to witness highest growth at a CAGR of 19.01% during the forecast period. This can be attributed to the majority of religious Muslim population, and government initiatives to promote religious travels, such as, Haj. In Kuwait, the leisure segment is anticipated to garner maximum revenue over the forecast period, with a total revenue amounting to USD 11,409.5 million in 2028, owing to the changing lifestyle, growing millennial population, and economic development of the region.

On the basis of age group, the generation X segment is expected to grab major market share in all the countries. In Saudi Arabia, the segment is estimated to dominate the market in terms of revenue, by gaining USD 11,142.5 million by 2028. This can be attributed to the high earning potential of this generation, along with change in lifestyle preferences. In UAE, the segment is anticipated to gain a revenue of USD 18190 million by 2028. Moreover, the millennials segment is expected to witness highest growth at a CAGR of 20.46% over the forecast period. People under this age group generally travel with their family, for education purposes and leisure, which is estimated to boost the segment growth. The same segment in Qatar’s market is projected to grow at a CAGR of 19.25% throughout the forecast period and attain the highest revenue of USD 6989.4 million by 2028, as generation X is the working population, which makes it the most travelled age group among all. In Kuwait, the segment is estimated to garner USD 9774.6 million in 2028, up from USD 6622.2 million in 2019, by growing at a CAGR of 19.01% during the forecast period. This growth can be attributed to the majority of population aged below 30 years, who are the major income source of the country.

The market is segmented by spent type into air tickets, hotel, insurance, and others, out of which, in Saudi Arabia, the air tickets segment is anticipated to hold a significant share of USD 4947.1 million by 2028. Highest share of international flights in the region, along with presence of large number of market players are estimated to drive the segment growth. On the other hand, the hotel segment is estimated to witness the highest growth, at a CAGR of 18.30% during the forecast period. In UAE, the air tickets segment is projected to garner a revenue of USD 6642.5 million by 2028, up from USD 3920.8 million in 2019, on account of increasing number of trips, for various purposes. The same segment in Qatar’s market holds the largest market share, and is expected to continue leading the segment share in terms of revenue, by gaining USD 5958.8 million by 2028, up from USD 3786.6 million in 2019. This can be attributed to the high flight fare, as the money spent on flight tickets covers the maximum share of any travelers' budget. Moreover, people prefer indirect flight, as it costs lesser, which is estimated to further boost the segment growth. In Kuwait, this segment is projected to hold the largest revenue share, by gaining USD 7322.2 million in 2028, owing to the high number of direct and indirect flights in the region.

The major key players functioning in the GCC outbound travel and tourism market, include, major airlines operating in these countries, along with significant hotel chains, food outlets, and travel insurance companies. However, the market has taken a massive hit post- COVID-19 pandemic. Due to the pandemic, consumer demand patterns are anticipated to shift, and the supply chains will be re-routed. Major companies are adopting extreme safety measures, such as, strict social distancing, use of PPE kits, mandatory RT-PCR test, and thermal screening to ensure healthy and safe travel for all the tourists. Moreover, the companies are using attractive strategies, such as discounts, and sale offers to draw customers.

What are the major factors driving the growth of the GCC outbound travel and tourism market?

Increasing trend of travelling, high disposable income, and rising number of direct flights are the major growth drivers for the market.

What would be the CAGR of GCC outbound travel and tourism market over the forecast period?

The market is anticipated to attain a significant CAGR over the forecast period, i.e., 2021-2028.

What are the challenges affecting the GCC outbound travel and tourism market growth?

Post COVID-19 restrictions on travel and fear in the mind of people are estimated to hamper the market growth.

Who are the major players dominating the GCC outbound travel and tourism market?

The major players in the market include various leading airlines, hotel chains, and other hospitality services operating in the gulf region.

What are the segments in the GCC outbound travel and tourism market?