People's preference for used home appliances, on the other hand, is rapidly growing. One of the prominent factors for the growing preference could be cost savings. Also, it further allows consumers to bargain for a better price in most cases. Additionally, it promotes reuse, which is beneficial to the environment. In other words, when consumers shop secondhand products, it benefits both the consumer and the environment.

One could obtain a used appliance in a number of ways, including from used appliance stores, local retail shops, or from an online secondhand products store. Further, one could also use social media in order to sell or purchase secondhand small domestic appliances.

The global second hand small domestic appliances market is estimated to garner a revenue of USD 5,600.69 Million by the end of 2031 by growing at a CAGR of 5.98% over the forecast period, i.e., 2022-2031. Further, the market generated a revenue of USD 3,155.80 Million in the year 2021. The growth of the market can be attributed to a growing preference for secondhand appliances, backed by their low cost. It has been observed that used goods are around 50% less expensive than new ones. Hence, this enables buyers to uncover excellent products at fair prices and save money throughout the entire process of buying used appliances. Furthermore, environmental concerns, a focus on reusability, and increased product life duration, along with many other factors, are expected to support the growth of the second hand small domestic appliances market. 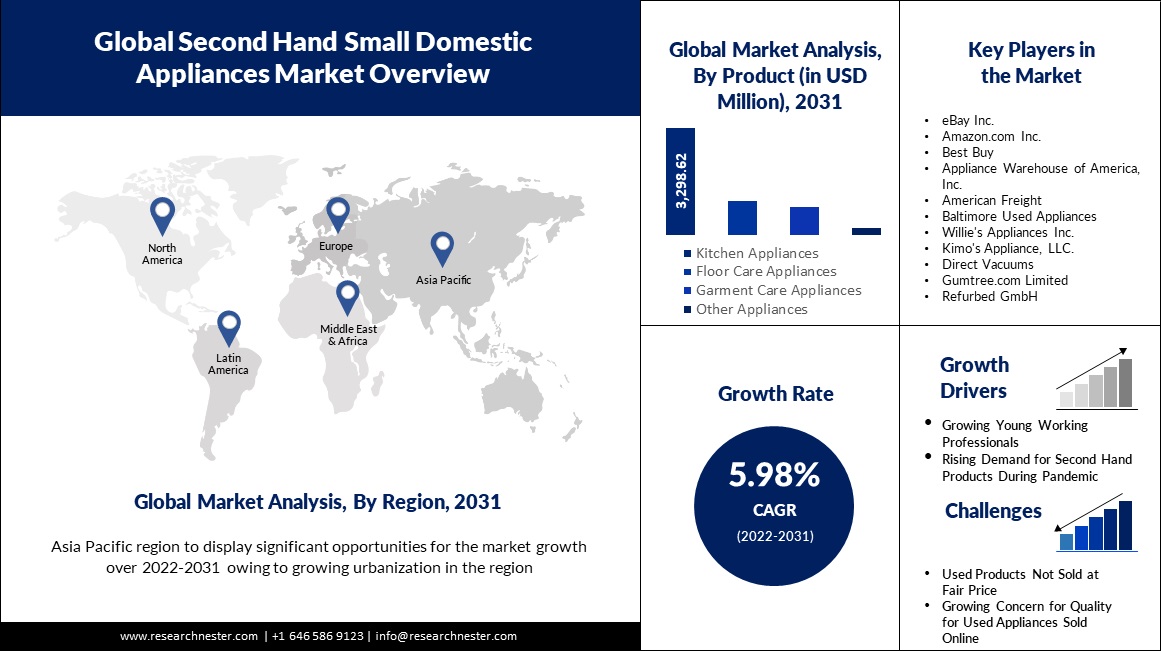 Furthermore, rise in urbanization is also estimated to boost the growth of the market. Since most urban households have a large number of electric appliances, and most rural areas are not fully electrified, the demand for used appliances in metropolitan areas is likely to increase. Also, the rise in middle class population would have a great positive impact on the market growth. For instance, in India nearly 54% of households in urban areas were of middle class, approximately 12% were wealthy, and about 31% were aspirational. Also, as 140 million households estimated to enter the middle class and another 20 million enter the higher income bracket by 2030, they are estimated to spend about 1-2.5 times more on necessities (food, beverages, garments, personal care, electronics, transportation, and housing) and approximately 2-4 times more on services (healthcare, education, entertainment and household care). However, since the cost of domestic appliances is anticipated to increase, it is always necessary amongst the end-users to make decisions that are within their own resources. As a result of their lower price compared to new alternatives, the demand for used small domestic appliance is anticipated to increase over the course of the projection period.

There has been growing demand for second hand domestic appliances among youth in developing nations owing to rise in young working professionals, who could afford second hand small domestic appliances since these appliances are budget friendly. According to the U.S. Bureau of Labor Statistics, in July 2022, 55.3% of young people (those between the ages of 16 and 24) were employed. This number climbed from 54.4% in July 2021.

As a result of the job losses, economic instability, and closures of certain businesses without a strong online presence that occurred during the COVID-19 pandemic, the demand for used items surged. Prevalence of this trend in the future is therefore expected to drive the market growth. Daily active users on one of the famous second hand products selling online platform, OLX, were increased to roughly 30% since January 2020, while demand has increased to about 25%.

For instance, the prices of consumer electronics and home appliances were predicted to increase between 2% and 5% starting at the end of May 2021 or the first week of June as manufacturers passed on the effects of higher input costs to consumers.

Global middle-class population rose from about 900 million to approximately 2 billion individuals between 2011 and 2019, an average annual rise of about 50 million people.

According to the Global E-waste Statistics Partnership (GESP), global e-waste production hit a record 53.6 million tonnes in 2019, an increase of 21% in just five years. By 2050, the yearly generation of e-waste could exceed 120 million tonnes.

The global second hand small domestic appliances market is segmented and analyzed for demand and supply by product into kitchen appliances, floor care appliances, garment care appliances, and other appliances. Out of which, the kitchen appliances segment is anticipated to garner the highest revenue of USD 3,298.62 Million by the end of 2031, growing at a CAGR of 6.59% over the forecast period. Further, the segment generated a revenue of USD 1,754.67 Million in the year 2021. Additionally, this segment has been further sub-segmented into grills & roasters, coffee makers, sandwich makers, mixers & juicers, air fryer, kitchen robot, and others. Amongst the segments, the coffee maker segment is anticipated to generate the highest revenue of USD 668.91 Million by the end of 2031, owing to growing youth population and working class people who consume coffee on regular basis. For instance, about 72% of employees were known to consume coffee, making it far more popular than other caffeinated beverages. Also, 68% of Americans are known to prepare coffee at home every day, compared to 32% of customers who buy it from a coffee shop once to three times each week.

The global second hand small domestic appliances market is also segmented and analyzed for demand and supply by distribution channel into online, and offline. Amongst these segments, the online segment is anticipated to generate the highest revenue, growing at a CAGR of 6.40% over the forecast period, backed by growing popularity of e-commerce retailers. Also there has been growing penetration of internet among people which has further boosted trend of online shopping. Hence, the majority of market players in the second-hand small domestic appliances market are leaning toward online distribution channels to advertise their goods on online marketplaces. Further, it is anticipated that more and more e-commerce platforms would provide such used goods alongside brand-new products as the trend of secondhand goods enters the market.

The Asia Pacific second hand small domestic appliances market, amongst the market in all the other regions, is projected to hold the largest market revenue of USD 2,730.33 Million by the end of 2031, up from a revenue of USD 1,457.03 Million in the year 2021. The market in this region is further estimated to grow at a CAGR of 6.55% over the forecast period, backed by growing urbanization, and rising middle class population in the region. In the Asia-Pacific area, urbanisation is still a major megatrend. Over 2.2 billion people, or 54% of the world's metropolitan population, reside in Asia. The urban population in Asia is projected to increase by 50% by 2050, or by an additional 1.2 billion people. The major factor for the growth of the urban population in this region is migration. The rate of migration from rural to urban areas is higher in low- to middle-income nations in the Asia-Pacific as a result of economic stagnation (overdependence on agriculture) and inadequate rural infrastructure (health and education facilities). Migration is also a significant component in the expansion of second hand small domestic appliances market, as rural residents frequently use migration as a tactic to increase household income and acquire access to better services in cities.

1) What are the major factors driving the growth of the second hand small domestic appliances market?

Ans: The major factors driving the growth of the market are growing young working professionals, rising demand for second hand products during pandemic, surge in price for home appliances, and others.

2) What would be the CAGR of second hand small domestic appliances market over the forecast period?

3) What are the challenges affecting the second hand small domestic appliances market growth?

Ans: Used product not sold at fair price, growing concern for quality for used appliances sold online, and high maintenance and repair cost are estimated to be the growth hindering factors for the market expansion.

Ans: The market in the Asia Pacific region is projected to hold the largest market share by the end of 2031 and provide more business opportunities in the future.

5) Who are the major players dominating the second hand small domestic appliances market?

7) What are the segments in the second hand small domestic appliances market?

Ans: The market is segmented by product, distribution channels, and by region.

8) Which segment captures the largest market size in the product segment in the second hand small domestic appliances market?

Ans: The kitchen appliances segment is anticipated to garner the largest market size by the end of 2031 and display significant growth opportunities.