The syphilis treatment drugs market is estimated to acquire a large revenue by growing at a notable CAGR over the forecast period, i.e., 2021 – 2029. The growth of the market can be attributed to growing number of incidences of unprotected sex, anonymous sex and intercourse under the influence of drugs. According to the United States Centers for Disease Control and Prevention (CDC), in 2019, nearly 46% of sexually active high school students did not use a condom the last time they had sex. Half of the cases of STD are reported among people aged between 15-24 years. In addition to these, growing prevalence of syphilis in developing nations is also expected to drive market growth in the near future. Furthermore, as the prevalence of sexually transmitted diseases (STDs) is increasing, the sales of treatment drugs are also evaluated to witness a major surge in the coming years, which in turn is assessed to boost the market growth. 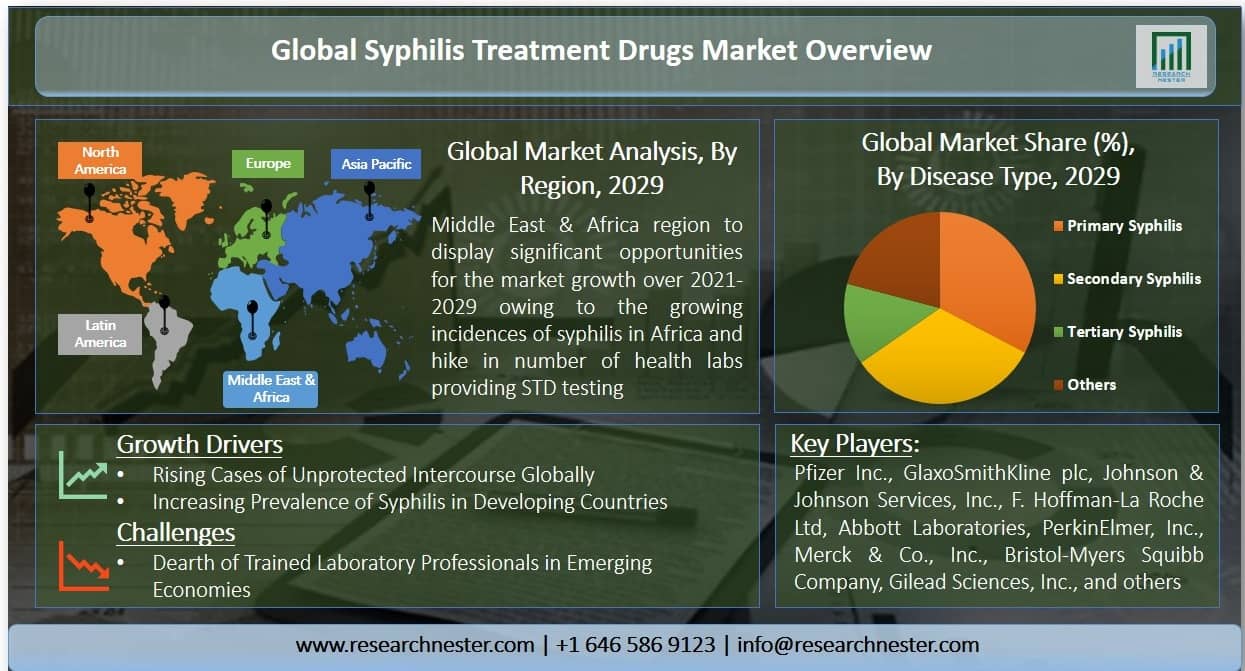 The market is segmented by disease type into primary, secondary, tertiary syphilis, and others, out of which, the primary and secondary syphilis segments are anticipated to hold the largest share in the syphilis treatment drugs market on account of the commonness of the disease in its earlier and transmissible stages. Additionally, majority of the cases of primary and secondary syphilis occur among homosexual men. Another report by the CDC states, in 2019, of the total syphilis cases, 38,992 were of primary and secondary (P&S) syphilis. Out of these, 56% of the total incidents accounted for all male cases. Rising openness towards same-sex is also estimated to offer opportunities to the growth of this market segment in the near future. Moreover, based on distribution channel, the segment for hospital pharmacies is evaluated to occupy the largest market share during the forecast period, which can be credited to the ease to receive prescribed medicines from the hospital facility itself. CLICK TO DOWNLOAD SAMPLE REPORT

On the basis of geographical analysis, the syphilis treatment drugs market is segmented into five major regions including North America, Europe, Asia Pacific, Latin America and the Middle East & Africa. The market in the North America region is estimated to grab the largest market share over the forecast period on the back of high awareness about the disease, favorable public health insurance plans and growing advancements in the healthcare sector. Europe is also assessed to acquire a large share in the market during the forecast period owing to the rising R&D activities to develop effective treatment for STDs in the region. However, the market in the Middle East & Africa is projected to witness noteworthy growth over the forecast period, which can be ascribed to increasing occurrence of syphilis in Africa, emergence of new point-of-care (POC) testing concepts and increasing number of public health labs to provide STD testing. According to the World Health Organization (WHO), Africa accounted for the highest prevalence of syphilis in the world. 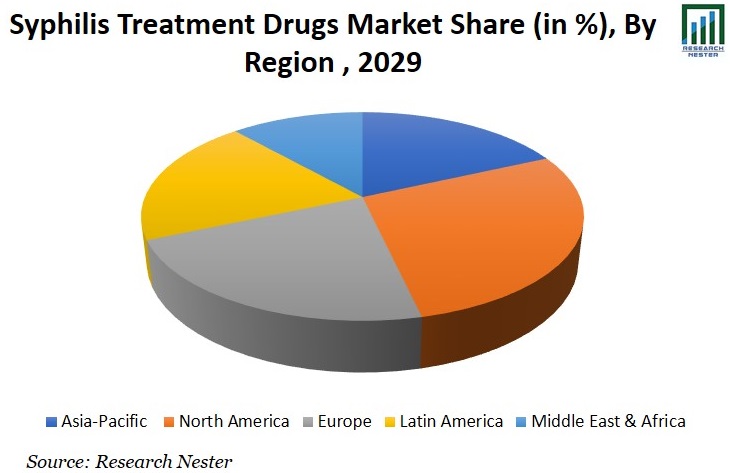 The syphilis treatment drugs market is further classified on the basis of region as follows:

Our in-depth analysis of the syphilis treatment drugs market includes the following segments:

What are the major factors driving the growth of the syphilis treatment drugs market?

Increasing incidences of unprotected sex worldwide and growing occurrence of syphilis in developing nations are major growth drivers for the market.

What would be the CAGR of syphilis treatment drugs market over the forecast period?

What are the challenges affecting the syphilis treatment drugs market growth?

Lack of trained laboratory personnel in under developed nations is estimated to hamper the market growth.

Which region will provide more business opportunities for growth of syphilis treatment drugs market in future?

Middle East & Africa region will provide more business growth opportunities on the back of high prevalence of syphilis in Africa.

Who are the major players dominating the syphilis treatment drugs market?

What are the segments in the syphilis treatment drugs market?

The market is segmented by disease type, distribution channel, and by region.

Which segment captures the largest market size in the disease type segment in the syphilis treatment drugs market?

The primary and secondary segments are anticipated to hold largest market size in value and is estimated to grow at a robust CAGR over the forecast period and display significant growth opportunities.