The global subarachnoid hemorrhage surgical devices market is estimated to garner sizeable revenue by growing at a significant CAGR over the forecast period, i.e., 2022–2030. The growth of the market can be attributed to the increasing demand for surgical treatment for subarachnoid hemorrhage (SAH), backed by the mounting cases of SAH, especially in the older population. Various lifestyle factors, such as, smoking, excessive drinking, cocaine abuse, high blood pressure, and others, along with family history of SAH and certain connective tissue disorders are the major causes for SAH in any individual. In this disease, certain vein in the brain swells and ruptures, which causes bleeding between the brain and skull. This causes clotting of blood in skull, which is deadly. The primary aim of the surgeries is to ensure the vein does not rupture and bleed again, for which various devices are used. The increasing cases of SAH backed by poor lifestyle and lack of routine health checkups, are estimated to boost the market growth. Along with this, increasing government initiatives to improve healthcare system and provide affordable treatments to all, in the form of insurance, reimbursements, and subsidies, are further expected to contribute to the growth of the market. 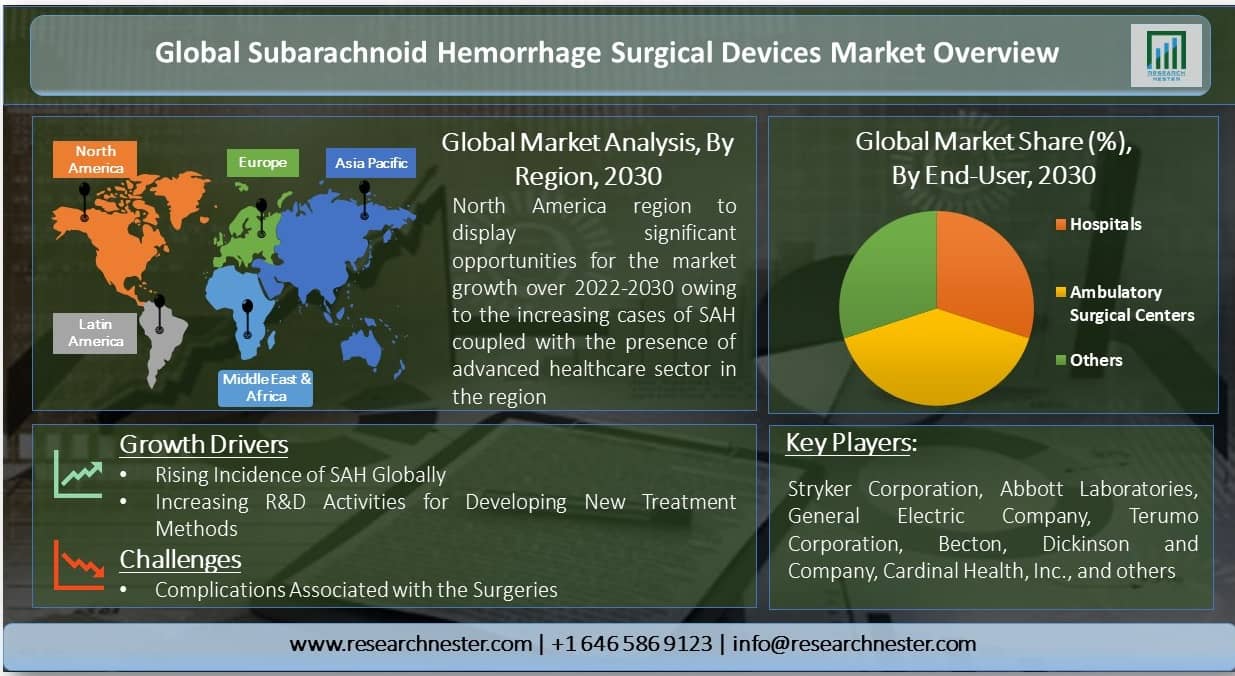 The global subarachnoid hemorrhage surgical devices market is divided by surgery type into endovascular surgery, and open surgery, out of which, the endovascular surgery segment is anticipated to hold the notable revenue share in the market during the forecast period as this is minimally invasive and less risky as compared to open surgery, which is why people prefer it, if the condition allows. However, the surgery depends on the condition of the patients.

On the basis of end-user, the market is segmented into hospitals, ambulatory surgical centers, and others, out of which the ambulatory surgical centers segment is anticipated to grow significantly throughout the forecast period. This can be attributed to the growing acceptance of ASCs as they are less expensive, specialized, and better equipped for surgeries. Moreover, this segment is expected to witness growth in developed nations, owing to higher health awareness amongst the people, whereas, hospital segment is estimated to dominate the market in developing countries. CLICK TO DOWNLOAD SAMPLE REPORT

Regionally, the global subarachnoid hemorrhage surgical devices market is segmented into five major regions including North America, Europe, Asia Pacific, Latin America and Middle East & Africa region. The market in North America region is estimated to garner largest share over the forecast period on the back of availability of advanced health equipment and technology in the region, along with higher healthcare expenditure. According to the World Health Organization (WHO), as of 2018, 16.416 % of the GDP was spent on the healthcare sector in North America. Moreover, increasing investments by major market players on research and development activities for the development of newer treatment methods are estimated to contribute towards the market growth in the forecast period.

The market in the Asia Pacific region is estimated to witness highest CAGR over the forecast period on account of increasing healthcare awareness amongst the people in developing nations, including, Japan, China, India, and Indonesia, along with rising disposable income. Moreover, constant development in the public healthcare system in the APAC region is also expected to positively affect the market. 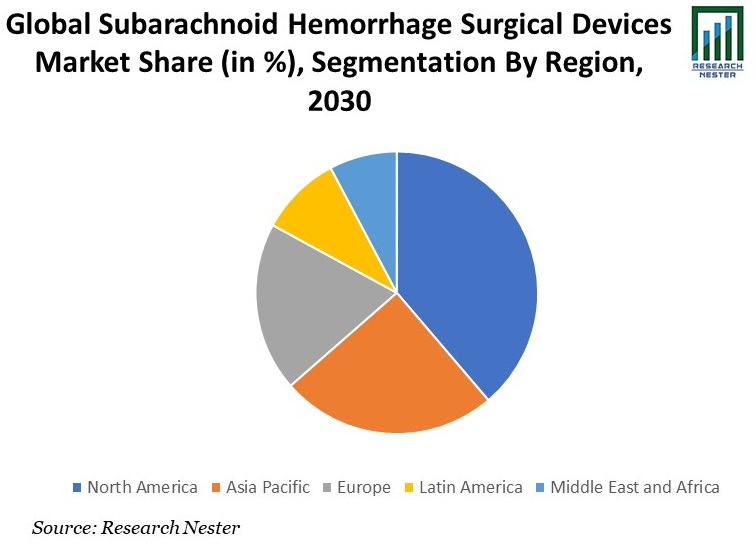 The global subarachnoid hemorrhage surgical devices market is further classified on the basis of region as follows:

1) What are the major factors driving the growth of the subarachnoid hemorrhage surgical devices market?

Ans: Rising prevalence of SAH and growing R&D investment for medical research are the major factors driving the market growth.

2) What would be the CAGR of subarachnoid hemorrhage surgical devices market over the forecast period?

Ans: The market is anticipated to attain a significant CAGR over the forecast period, i.e., 2022-2030.

3) What are the challenges affecting the subarachnoid hemorrhage surgical devices market growth?

Ans: High cost of treatment and complications associated with the surgery are the major factors estimated to hamper the market growth.

Ans: The market in the North America is estimated to provide most growth opportunities owing to the region’s high healthcare expenditure and R&D investment during the forecast period.

5) Who are the major players dominating the subarachnoid hemorrhage surgical devices market?

7) What are the segments in the subarachnoid hemorrhage surgical devices market?

Ans: The market is segmented by device type, surgery type, end-user, and by region.

8) Which segment captures the largest market size in the end-user segment in the market?

Ans: The ambulatory surgical centers segment is anticipated to hold largest market size on the back of focused and more effective treatment facilities.