The global steam turbine MRO market is estimated to garner a sizeable revenue and grow at a CAGR of ~6% over the forecast period, i.e., 2022 – 2030. The growth of the market can be attributed to the increasing potential of thermal energy in emerging economies, and ageing fleet of steam turbines across the world. In addition, steam turbines are more powerful as compared to other electricity generation systems. In 2018, a total of almost 1,145 gigawatts of power was generated by thermoelectric plants in China, out of which Shandong alone generated a total power of about 103 gigawatts. This is another crucial factor expected to fuel the progress of the market in the forthcoming years. Furthermore, growing environmental concerns is giving rise to the higher demand for cleaner energy from steam turbines, which is also projected to drive the growth of the market. In addition, rising rate of industrialization and urbanization worldwide is also assessed to provide ample growth opportunities to the market in the near future. 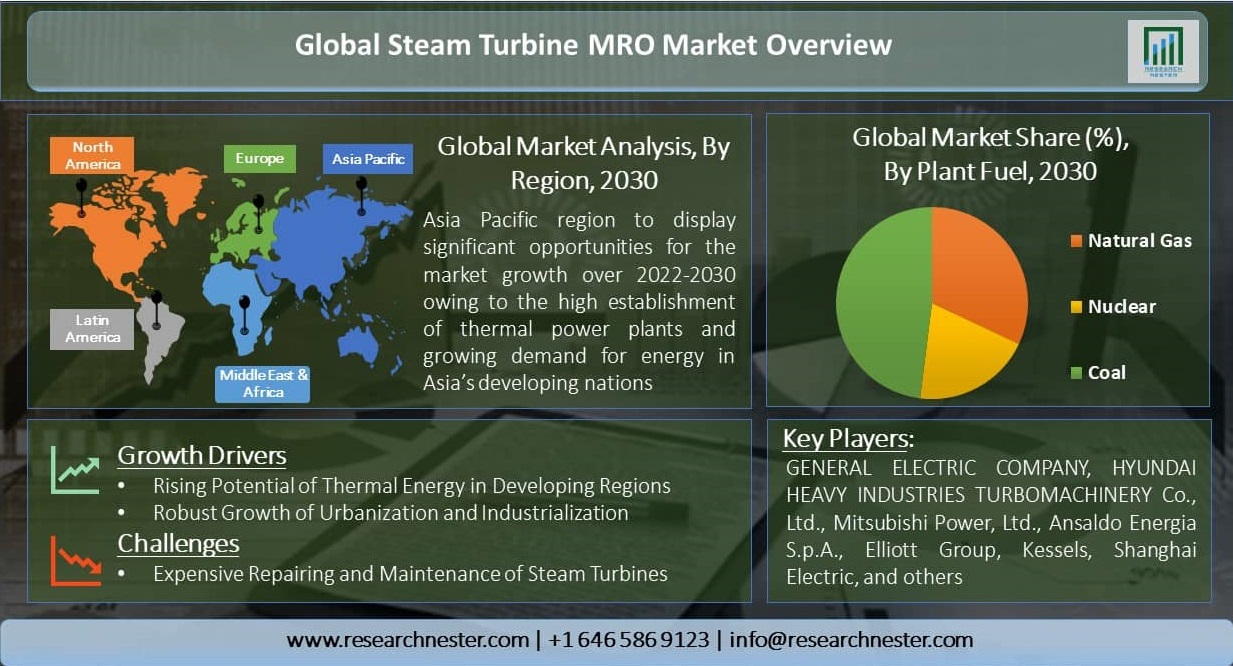 The market is segmented by service provider into original equipment manufacturers, independent service providers, and in-house, out of which, the original equipment manufacturers (OEMs) segment is anticipated to hold the largest share in the global steam turbine MRO market on account of the increasing number of long-term service agreements between power producers and OEMs. Along with this, OEM products are extremely beneficial in reducing costs and offer higher return on investment, which are also projected to drive the growth of the market segment by the end of 2030. Additionally, on the basis of plant fuel, the segment for coal is evaluated to gather the largest market share over the forecast period, which can be credited to the high usage of coal in steam power plants around the globe to convert enormous amounts of energy available in coal to energy. According to a report by the International Energy Agency (IEA), the total amount of coal fired power generation in the world increased up to more than 10,000 TWh in 2018.

On the basis of geographical analysis, the global steam turbine MRO market is segmented into five major regions including North America, Europe, Asia Pacific, Latin America and the Middle East & Africa region. The market in the Asia Pacific is estimated to occupy the largest share and witness noteworthy growth over the forecast period on the back of increasing establishment of thermal power plants and growing fleet of ageing turbines in the region. Apart from these, rise in demand for energy in developing countries of the region, high amount of energy generated by coal-fired power plants and rise in the number of industrial operations are also predicted to boost APAC’s market growth in the future. Another report by the IEA stated that the total electricity consumption in the Southeast Asia will double by the end of 2040, with an annual growth rate of about 4%, which is twice as fast as the rest of the world. Moreover, the market in Europe is also expected to witness notable growth during the forecast period owing to the large number of upcoming nuclear projects in Russia and increasing number of gas-fired power plants in Germany.

The global steam turbine MRO market is further classified on the basis of region as follows:

What are the major factors driving the growth of the steam turbine MRO market?

The major growth drivers for the market are growing potential of thermal energy in emerging nations, and rapid industrialization and urbanization.

What would be the CAGR of steam turbine MRO market over the forecast period?

What are the challenges affecting the steam turbine MRO market growth?

High maintenance and repairing costs of steam turbines is estimated to hamper the market growth.

Which region will provide more business opportunities for growth of steam turbine MRO market in future?

Asia Pacific will provide more business opportunities for the market growth owing to the increasing establishment of thermal power plants and growing fleet of ageing turbines in the region.

Who are the major players dominating the steam turbine MRO market?

What are the segments in the steam turbine MRO market?

The market is segmented by plant fuel, capacity, service provider, and by region.

Which segment captures the largest market size in the plant fuel segment in the steam turbine MRO market?

The coal segment is anticipated to hold largest market size in value and is estimated to grow at a steady CAGR over the forecast period and display significant growth opportunities.