The growth of the global starch capsule market is thriving on the back of the rapidly increasing use of starch capsules in the pharmaceutical as well as nutraceutical sector. Additionally, the increasing healthcare expenditure in various countries across the world is also expected to drive the growth of the market. Furthermore, it has also been observed that the capsule that are made with starch possess higher burst strength and elasticity which is also projected to fuel up the growth of the market in various regions across the world.

The global starch capsule market reached USD 354.45 million in the year 2019 and is expected to garner USD 869.69 million by the end of 2028 by registering a CAGR of 10.64% across the globe over the forecast period 2021-2028. On the other hand, the market is anticipated to gain an incremental $ opportunity of USD 35.09 million in the year 2020 as compared to the previous year. Moreover, the market is also expected to grow by 2.03x and further gain an absolute $ opportunity of USD 441.16 million during the forecast period.

The global starch capsule market is segmented by regions into North America, Latin America, Europe, Asia Pacific and Middle East and Africa. It is to be noted that in the global market, countries such as US, Germany, China, UK & Japan are presently capturing the largest markets with China expected to grow at the highest rate. Various factors such as rising awareness among people regarding nutritional deficiencies, immune deficiencies, rising geriatric population, rising incidences of various disorders along with favorably changing regulatory landscape is expected to result in a rise in demand for starch capsules in the global market.

The global starch capsule market has been segmented by application into health supplements, cardiovascular drugs, sedatives, analgesics and others. Over the recent years, it has been observed that there is an increasing number of people preferring dietary supplements to address various nutritional deficiencies or as immunity boosters. This is resulting in a rise in demand for capsules to accommodate the consumer driven requirement. Moreover, the shifting preferences of people towards the vegetarian capsules instead of hard-shell gelatin capsule is expected to impact the market positively. The starch capsules are considered as an ideal alternative for hard gelatin capsules with no preservatives, gelatin, gluten and animal by products. This factor is further expected to raise the demand for the product among the health-conscious customers, thus accelerating the expansion of the market.

Increasing Advancements in the Healthcare Sector

Growing pharmaceutical spending by nations worldwide along with the increasing geriatric population worldwide is raising the need for advanced healthcare systems. Increasing spending for research and development has contributed to the development of advanced capsules, such as starch capsules, which is known to have several benefits. According to the status by Organisation for Economic Co-operation and Development (OECD), pharmaceutical spending in the United States increased from 1198 USD/capita in the year 2015 to 1220 USD/capita in the year 2017. 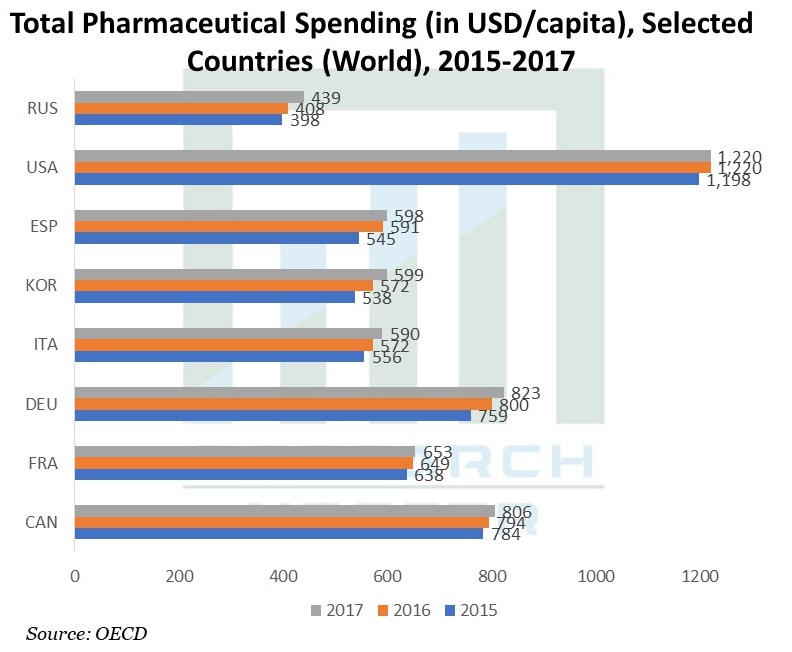 High cost of production, lack of consumer awareness, changing production technologies and quality standards along with the fluctuating social and economic conditions and the government regulations are some of the factors anticipated to act as a barrier to the growth of the global starch capsule market during the forecast period.

The global starch capsule market is driven by several affluent industry leaders, including players such as Lonza. On the other hand, numerous manufacturers in the pharmaceutical industry which manufacture different types of capsules, are increasingly investing on to develop and adapt new technologies for expanding their existing product portfolio.

What are the major factors driving the growth of the Starch Capsule market?

Increasing advancements in the healthcare industry, backed by the increasing spending by the government of nations globally is one of the major factors that is driving the growth of the market.

What would be the CAGR of Starch Capsule Market over the forecast period?

Which region is currently holding dominating share in the Starch Capsule market?

The market is driven by several affluent industry leaders, including players such as Lonza.

Which region will provide more business opportunities for growth of Starch Capsule market in future?

Who are the major players dominating in the Starch Capsule market?

The market is majorly segmented by application, end user and by region.

The health supplements segment, which is a sub-segment of the application segment, is anticipated to display significant growth opportunities throughout the forecast period.