The global solid phase peptide synthesis market is estimated to grow with a moderate CAGR during the forecast period, i.e., 2022-2030. The extensive research and development associated with solid phase peptide synthesis, along with the increasing technological advancements in the development of solid phase peptide synthesizers, are expected to fuel the growth of this market. Peptides have an important role in signalling molecules in the regulation of human metabolism. With the advancement in technology, researchers realized the potential role of peptides as therapeutic agents, and consequently, research on the chemical synthesis of peptides advanced further, which led to the development of peptides using the solid phase peptide synthesis method. Peptides have diverse biological characteristics such as high biological activity, high specificity & ample chemical space, relative ease of synthesis, ready availability, and low toxicity. Therefore, they are used in numerous areas such as immunogens to produce selective peptide antibodies, binders to test the affinity of antibodies to antigens, medical imaging, and radionuclide therapy. According to the data collected from International Diabetes Federation, it is estimated that around 463 million people globally had diabetes in 2019, and by 2045, the count is projected to reach 700 million. The growth of the market can also be attributed to factors such as the increasing use of peptides in pharmaceutical drug development and in the treatment of various lifestyle disorders such as diabetes and obesity. Furthermore, due to the rapid and high-purity synthesis of peptides through solid phase peptide synthesis, the peptides can also be used in vaccine systems. The vaccines developed using peptides are highly stable and generally water-soluble. This factor is estimated to significantly boost the market growth. 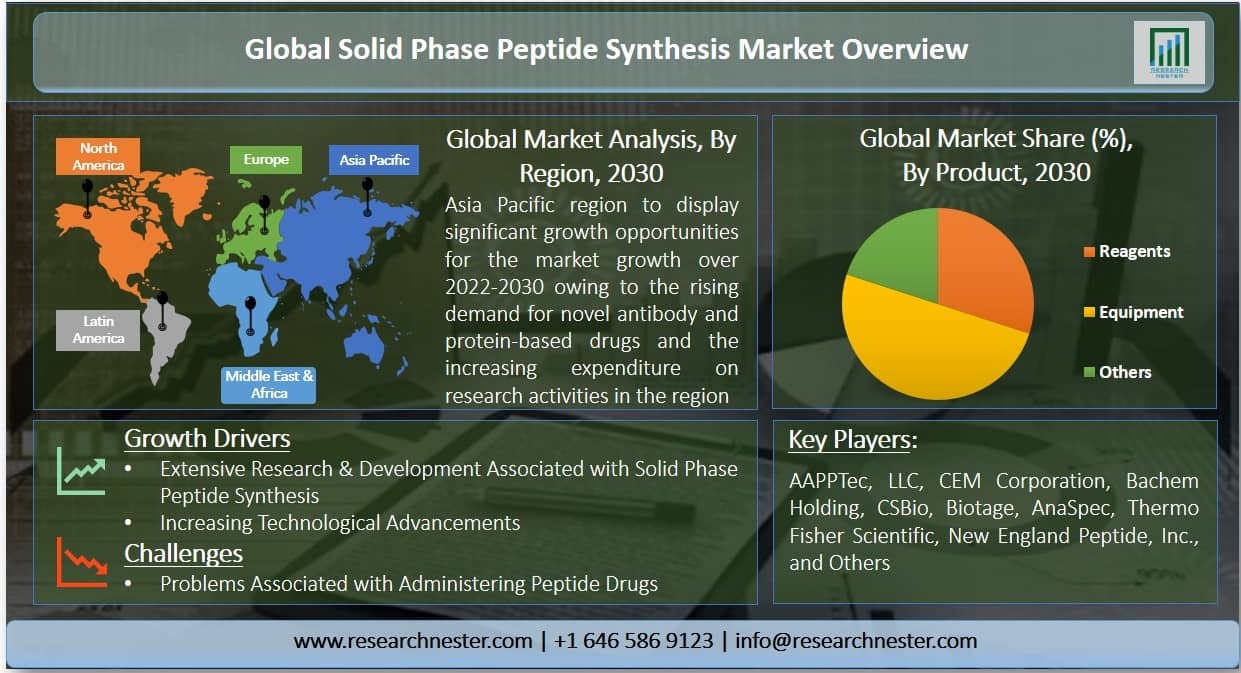 The market is segmented on the basis of product into reagents, equipment, and others, out of which, the equipment segment is anticipated to grab the largest share by the end of 2022, on account of higher adoption rates of these instruments for the solid phase peptide synthesis. Moreover, the use of these instruments also leads to ease of operation, which is also projected to contribute to the growth of the segment during the forecast period. CLICK TO DOWNLOAD SAMPLE REPORT

On the basis of end-user, the pharmaceutical & biotechnology industry segment in the global solid phase peptide synthesis market is projected to grow with a significant CAGR over the forecast period. The growth of the segment can be attributed to the growth in use of peptides for therapeutic development and increased research & development activities in this segment relating to genomics, molecular biology, and associated fields.

Geographically, the market is segmented into North America, Latin America, Europe, Asia Pacific and the Middle East & Africa region. The market in the Asia Pacific is predicted to grow at the highest CAGR over the forecast period owing to the rising demand for novel antibody and protein-based drugs and the increasing expenditure on research activities in the region. Furthermore, in 2022, the market in North America is evaluated to occupy the largest share in terms of revenue, owing to the favourable regulatory environment for early approval of peptide drugs, accompanied by the presence of advanced healthcare infrastructure in the region. Along with this, North America also has a high prevalence of chronic lifestyle disorders, which is also expected to boost the demand for peptides, which in turn, would contribute to the market growth in the region.

Alternatively, the market in Europe is also anticipated to occupy a significant share in the solid phase peptide synthesis market on account of high investments in solid phase peptide synthesis technologies and a high prevalence of obesity & diabetes in the region. As per the International Diabetes Federation Atlas, in 2019, around 59 million individuals in the age between 20-79 years had diabetes in Europe. Additionally, European region had the highest number of children and adolescents having Type-1 diabetes and the number amounted to 296,500 in total in the same year. 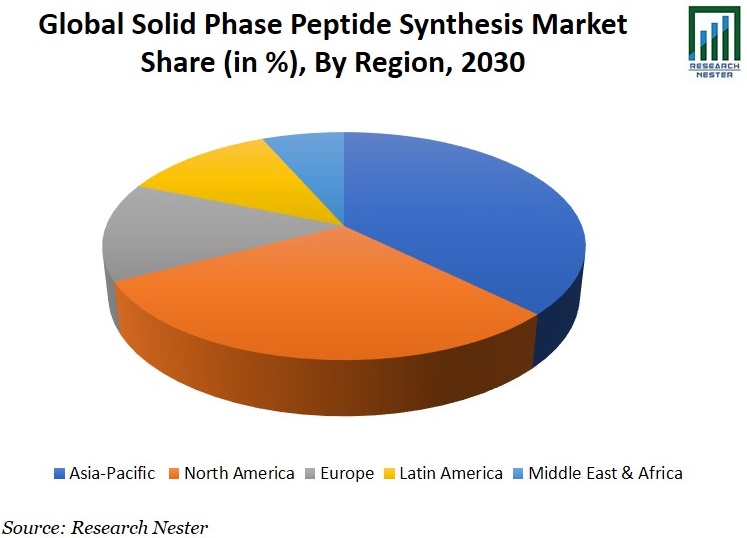 The global solid phase peptide synthesis market is further classified on the basis of region as follows:

1) What are the major factors driving the growth of the solid phase peptide synthesis market?

Ans: The extensive research and development and the increasing technological advancements in development of solid phase peptide synthesizers are the key factors driving market growth.

2) What would be the CAGR of solid phase peptide synthesis market over the forecast period?

3) What are the challenges affecting the solid phase peptide synthesis market growth?

Ans: The problems associated with administering peptide drugs and dispersed regulations for therapeutic peptides are estimated to hamper the market growth.

Ans: The market in Asia Pacific region will provide ample growth opportunities owing to the rising demand for novel antibody and protein-based drugs in the region.

5) Who are the major players dominating the solid phase peptide synthesis market?

7) What are the segments in the solid phase peptide synthesis market?

Ans: The market is segmented by product, end-user, and region.

8) Which segment under the end-user segment captures the largest market size in the solid phase peptide synthesis market?

Ans: With respect to end-user, the pharmaceutical & biotechnology industry segment is anticipated to hold the largest market share owing to the growth in use of peptides for therapeutic development.