Increasing preference for renewable energy sources owing to its environmental benefits is expected to facilitate the solar outdoor LED lights market. Through solar LED lighting, the companies have roughly catered to a population of 55.1 million people in Africa, 57.4 million people in Asia and 2.5 million in the rest of the world. In addition, the regional solar capacity has enhanced the market demand owing to the environmental concerns related to the conventional sources of electricity. The process of evolution with smart technology has significantly changed the overall lighting industry in terms of energy and money savings, ensuring increased safety and convenience to the users. Moreover, increase in awareness and concerns for environment coupled with rise in purchasing power are anticipated to be the vibrant factors fostering the growth of solar LED lighting market.

Furthermore, various companies are choosing to expand by acquiring players to strengthen their position in the market. For instance, Philips Lighting acquired LiteMagic Technologies, the Chinese urban lighting company, in order to expand its product portfolio. Further, Hubbell Incorporated acquired Aclara Technologies LLC for USD 1.1 billion, which strengthens the former company’s leadership position in the utility market. These expansions will showcase a robust growth in the industry. 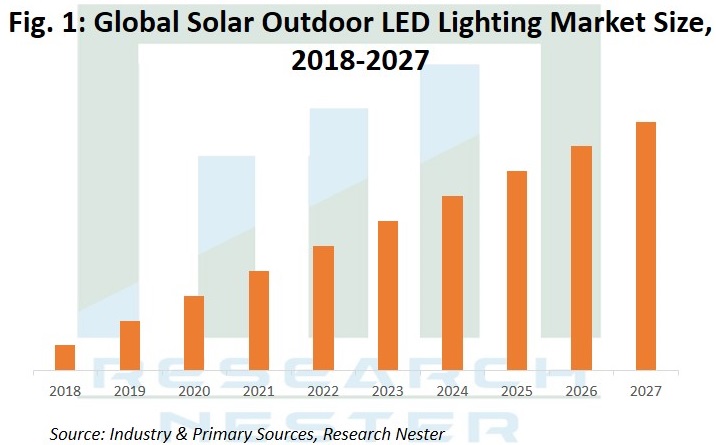 The global market is segmented region wise into 5 major regions comprising of North America, Europe, Asia Pacific, Latin America, and Middle East & Africa. Among these regions, Asia Pacific held the largest market share in 2018. This can be primarily attributed to the increasing initiatives coupled with growing number of developments across various developing economies in the region. For instance, rising implementation across India for smart cities with developed infrastructure and technologies, the market demand is anticipated to increase rapidly during the forecast period. Moreover, growing developments in the architectural, highways & roadways, and public places construction are further resulting in the increased demand for solar outdoor LED lights across the region. Another such initiative is “Light up the Future” – in which China Environmental Protection Foundation is offering solar street lights to villages to enable access to the community members, to clean energy lighting technology and enhanced safety and livelihood, is further expected to contribute largely in the growth of the market across China. Moreover, rising favorable government policies along with significantly high awareness rate among the population regarding the utility of renewable power sources across Japan is projected to propel the market rapidly.  As a whole, the Asia Pacific region held a market share of 41.6% in the year 2018. Concurrently, the market in North America held the second highest market share of 28.26% in the same year. DOWNLOAD SAMPLE REPORT HERE 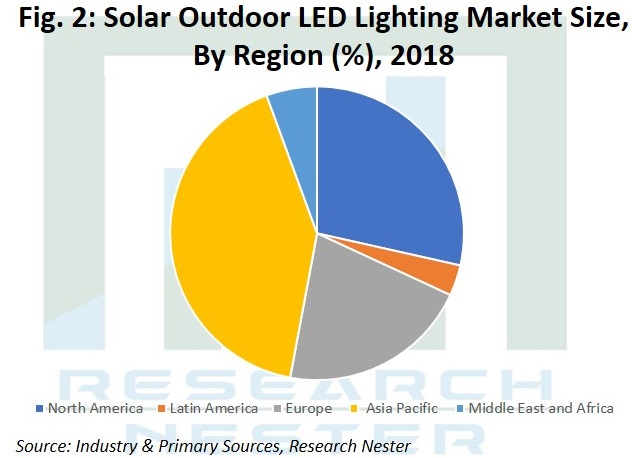 The global market is bifurcated by end use into residential, institutional, industrial, and commercial segments. The commercial sector held a major share of 35.5% in 2018 and is estimated to grow at a CAGR of 13.2%, during the forecast period of 2019 to 2027.

The market is segmented by installation, into retrofit and new installations, out of which the retrofit segment held the largest market share in 2018.

The global market is further bifurcated by mode into standalone and grid, out of which, the grid segment held the largest market share in 2018.

The growth of market is significantly driven by the rapid cost reduction associated with the solar LEDs. In the rural areas, particularly in the developing countries, there are difficulties in accessing energy due to long transmission lines and inadequate electrification, which has led to adoption of solar LED lighting solutions. These lights helps to fulfil the requirements of the consumers at a lower cost.There has been reduction in cost of solar electricity in the US for different sectors such as residential, commercial, and utility. This reduction in cost of electricity is supported by the government subsidies and initiatives, which is boosting the global market. Additionally, declining costs is making the distributed solar PV projects more attractive for private companies. Also, at the same time, technological improvements led to significant increases in efficiency of LED lightings, which is expected to propel the growth of the market, during the forecast period. As the cost of solar PV keeps falling, China is accelerating reductions in subsidies for solar PV projects which is helping them to expand their solar energy capacity at a subsidized rate. The rising government approvals and support for the deployment of solar LED street lights in different areas is expected to fuel the market growth in China during the forecast period.

One of the major restraining factors for the growth of global market is the high costs associated with the installation in tandem with climate constraints. In addition, presence of substitutes of solar electricity, such as wind energy is also expected to hamper the market growth, during the forecast period.

Signify Holding (Philips Lighting), is a multinational company, which provides with high-quality, energy-efficient lighting products, systems and services. The company is recognized for its development, manufacturing and sale concerning innovative, energy-efficient lighting systems and services. In May 2018, Philips Lighting acquired LiteMagic Technologies, a Chinese urban lighting company. This acquisition adds a complementary portfolio of luminaires and control systems for the company.

Additionally, few players are increasingly adopting innovative ways to establish themselves in the fragmented and competitive market through introduction of energy efficient technologies. Concurrently, new players in the market are also adopting the similar strategies in order to increase their product portfolio and gain a global prevalence in the market.