The growing applications of IoT technologies as well as cloud-based services in various industries have raised the demand for smart railways so as to integrate the new generation services and solutions for their operation. Moreover, the contribution of information and communications technology in smart railways further gives rise to efficient and modern forms of transportation.

Growth Highlights based on Region during 2017-2027

The global smart railways market is segmented by regions into North America, Latin America, Europe, Asia-Pacific and Middle East and Africa, out of which, the market in Europe is anticipated to hold the leading share in smart railways market over the forecast period. This can be attributed to the huge investments made by government on smart railway projects along with growing adoption of Internet of Things in this region. The market in North America is anticipated to hold the second largest share on account of upcoming high-speed train projects in the U.S. and Canada. The market in Asia Pacific is estimated to observe a significantly high growth in the upcoming years as a result of rising advancements in the region. For instance, China is focusing on the development of high-speed trains in order to reduce the travel time between railway stations. CLICK TO DOWNLOAD SAMPLE REPORT 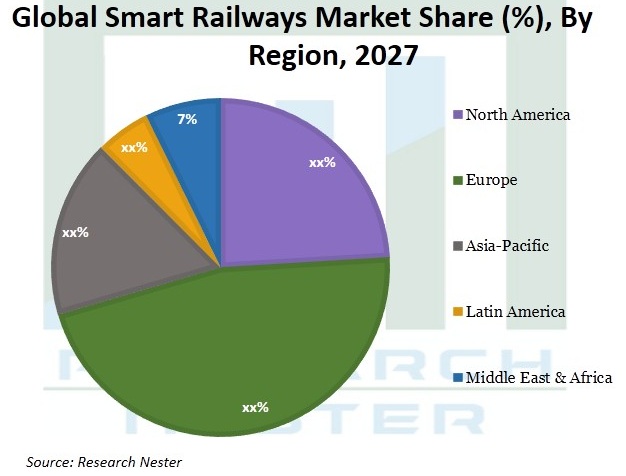 The global smart railways market has been segmented by solution into passenger information system, freight information system, rail traffic management system, advance security monitoring system, rail communication and networking system, smart ticketing system, rail analytics system and others. Out of these, the rail communication and networking system segment is predicted to observe a significant raise in the revenue growth. This can be attributed to the growing demand for modern train solutions, signaling for capacity enhancement, safety of rail systems and other Ethernet based infrastructure. On the other hand, the passenger information system segment is anticipated to grow substantially as it provides information on safety and system reliability. Additionally, it also offers accurate train timings in order to enhance the passenger satisfaction. Moreover, the real-time train tracking, online connectivity issues, route information and scheduling are some other factors responsible for the growth of this segment in the next few years. 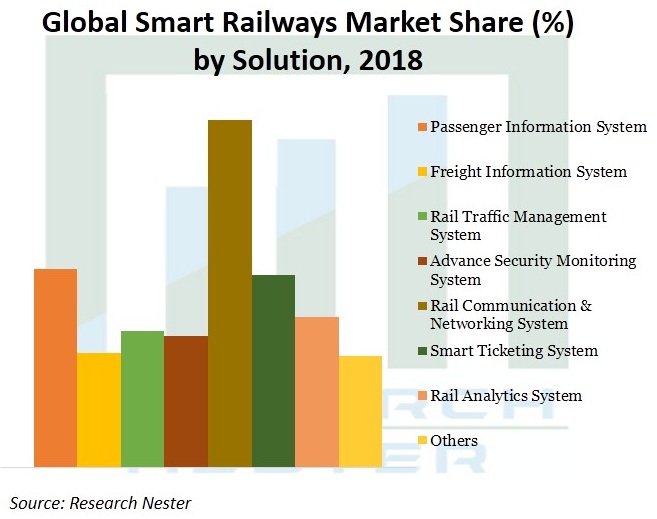 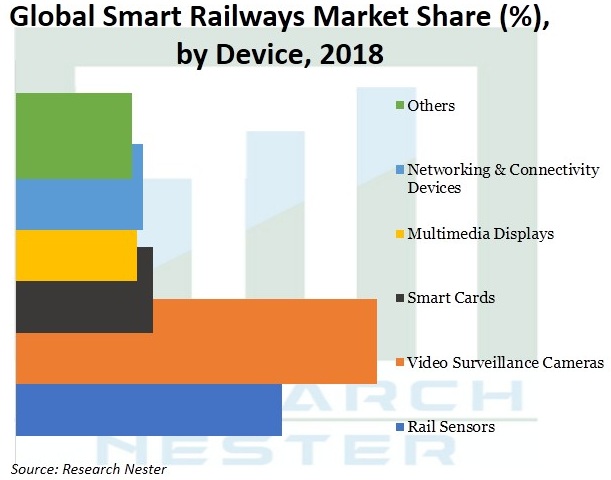 The increasing demand for improved passenger safety measures, dynamic route scheduling and efficient railway stations by the railway industry globally has led to the introduction of Internet of Things in this sector. The streamlined operations focus on controlling the trains through tracking across networks and processing the data through analytics. The enhanced services and solutions offered by this industry include e-tickets and scheduling information among several others. Smart sensors across railway tracks and train engines facilitate regular monitoring and maintenance of the trains. Moreover, they detect various parameters including speed, location, direction and temperature. The concept of smart cities that has been gaining popularity is anticipated to become another major growth driver as it further gives rise to the growing developments in the railways industry. Furthermore, rising urban population across the world is projected to raise the demand for smart railways for freight as well as for the increasing number of passengers. As per the United Nations Department of Economic and Social Affairs, 68% of the world’s population is estimated to live in urban areas by 2050.

The lack of infrastructure for information and communications technology is estimated to be a major restraining factor for the smart railways market. In addition to this, the lack of skilled workforce in developing nations and dearth of proper railway infrastructure in underdeveloped countries are some other factors anticipated to negatively impact the market growth over the forecast period.

Moreover, other key and niche players are working towards the expansion of product portfolio along with investing in high quality R&D to develop highly engineered and innovative technologies with easy interface for smart door locks in order to gain competitive edge in the global smart door lock market.

What are the major factors driving the growth of the Smart Railways market?

Increasing demand for improved passenger safety measures, dynamic route scheduling and efficient railway stations by the railway industry globally are some of the major factors that are driving the growth of the market.

What would be the CAGR of Smart Railways market over the forecast period?

Which region will provide more business opportunities for growth of Smart Railways market in future?

Who are the major players dominating the Smart Railways market?

What are the major segments in the global smart railways market?

The market is majorly segmented by solution, device and by region.

What can be the significant growth opportunity for the solution segment in the smart railways market?

The rail communication and networking system segment, which is a sub-segment of the solution segment, held the largest market share in the year 2018 and is anticipated to display significant growth opportunity.

Lack of infrastructure for information and communications technology is one of the major factors anticipated to act as a barrier towards the growth of the global smart railways market.