The global rooftop solar PV market is estimated to garner notable CAGR over the forecast period, i.e., 2022 – 2030. The growth of the market can be attributed to growing awareness regarding environmental conservation, along with adoption of renewable energy to curb the pollution level. Burning of fossil fuels in thermal power plants is one of the biggest causes of air pollution, and global warming. Solar energy refers to the energy of the sunlight which is trapped by solar cells to generate electricity. The increasing prominence of solar energy on residential scale is expected to boost the market growth. According to the International Energy Agency (IEA), solar power generation crossed 720 TWh in 2019, registering a growth of 22%.  Rising government initiatives to promote the use of solar energy, such as subsidized solar panels are estimated to drive the market growth. Moreover, rising individual awareness regarding the adoption of solar energy and installation of solar panels in houses are estimated to fuel the market growth. 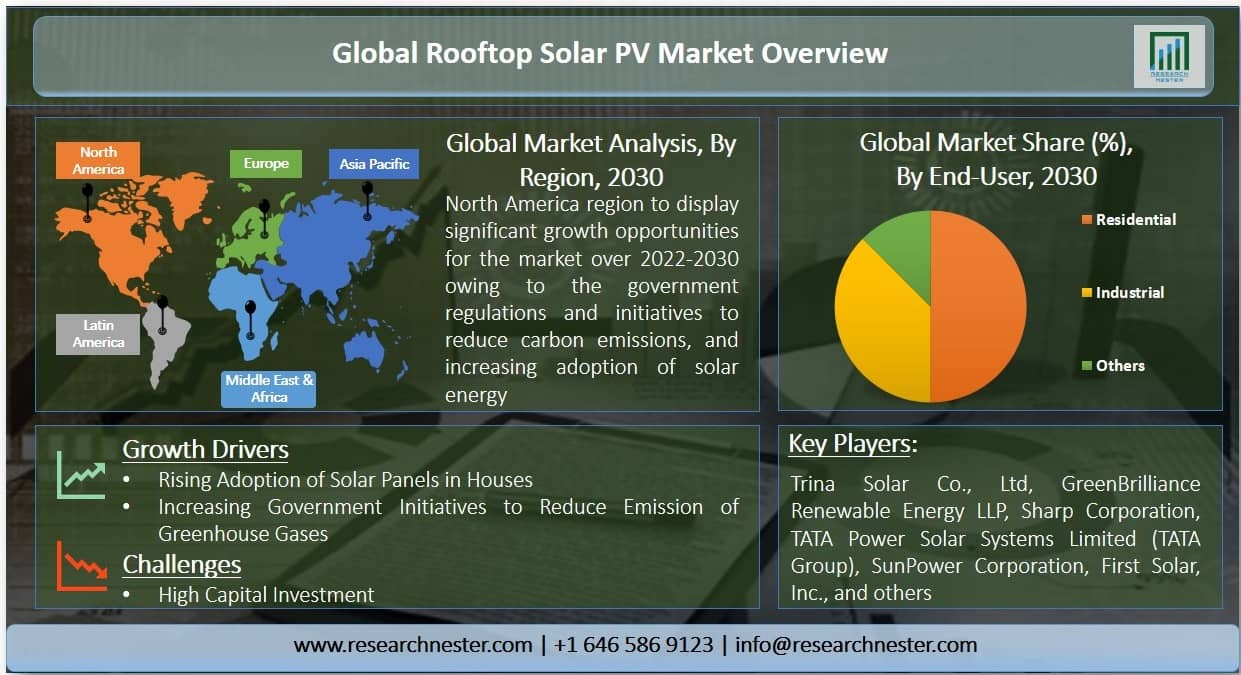 The global rooftop solar PV market is segmented by end-user into residential, commercial, and others, out of which, the residential segment is anticipated to hold the largest share in terms of revenue during the forecast period on account of increasing installation of rooftop PV in households, as they are cost effective, space saving, and easy to install.

Regionally, the global rooftop solar PV market is segmented into five major regions including North America, Europe, Asia Pacific, Latin America and Middle East & Africa region. The market in North America region is estimated to grab major share over the forecast period on the back of high public awareness and government policies to encourage the adoption of solar farms in the region. According to the data by the U.S. Energy Information Administration (EIA), more than 2,500 utility scale solar power plants were functioning in the U.S. in 2018. Moreover, increasing installation of solar panels on utility scale is estimated to boost the market growth. According to the data by IEA, in the United States 13.2 GW of solar PV were installed in 2019, which was 25% higher than 2018.

The market in the Asia Pacific is growing rapidly and is estimated to record highest CAGR in the forecast period owing to the growing government investment in renewable energy sources, in China, India, Japan, and other developing countries in the region. China currently is the largest producer of solar energy in APAC region, producing more than 170 GW electricity in the year 2018. Moreover, the latitudinal location of this region and abundant sunlight available all around the year is estimated to boost the market growth in the region. 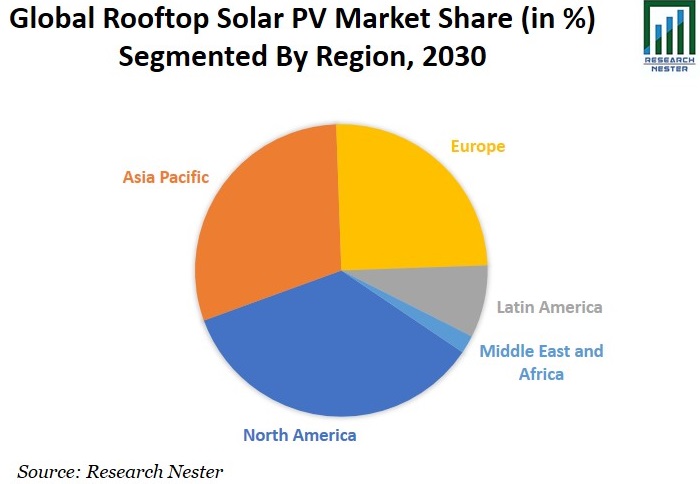 The global rooftop solar PV market is further classified on the basis of region as follows:

1) What are the major factors driving the growth of the rooftop solar PV market?

Ans: Rising environment awareness and increasing government initiatives to promote the use of solar energy are the major factors driving the market growth.

2) What would be the CAGR of rooftop solar PV market over the forecast period?

3) What are the challenges affecting the rooftop solar PV market growth?

Ans: High capital investment, and lack of proper infrastructure are some of the factors estimated to hamper the market growth.

4) Which region will provide more business opportunities for growth of rooftop solar PV market in future?

Ans: The market in North America is estimated to garner the largest market share owing to the large number of individuals adopting solar energy by installing solar PVs in their homes.

5) Who are the major players dominating the rooftop solar PV market?

7) What are the segments in the rooftop solar PV market?

Ans: The market is segmented by application, end-user, and by region.

8) Which sub-segment captures the largest market size in the end-user segment in the market?

Ans: The residential segment is anticipated to hold largest market over the forecast period on the back of ease of installation of rooftop PVs for residential end-users.