Resorcinol formaldehyde latex is a composite material that combines resorcinol (R), formaldehyde (F), and latex (L) to offer the bonding of synthetic fibers and rubber compounds. The primary purpose of an adhesive is to transfer load tension from a rubber matrix to reinforcing fiber components. There are two major steps involved in creating standard RFL. Resole-type compounds are created in the first stage by the reaction of resorcinol and formaldehyde. The second stage mostly consists of adding latex to the RF resin from the first step.

Further the most significant treatment involved in RFL is dipping. RFL dipping process is a conventional method for treating textiles to attach them to rubber compounds. The raw fabric's dimensional stability and adherence to the rubber compound are both quite poor. Hence, an adhesive coating is applied to the fabric's surface during the dipping process to increase adhesion.

The tire industry uses the highly successful resorcinol formaldehyde latex (RFL) dipping method to improve adhesion between rubber and cables. Further, there are various drawbacks of RFL dipping which includes cost, efforts, and time requires, along with health aspects, and concern regarding environment. However, modern industrial settings offer high standards of worker and environmental protection. Further, resorcinol formaldehyde latex is extensively used in industries such as rubber, healthcare, transport, chemical, and others. 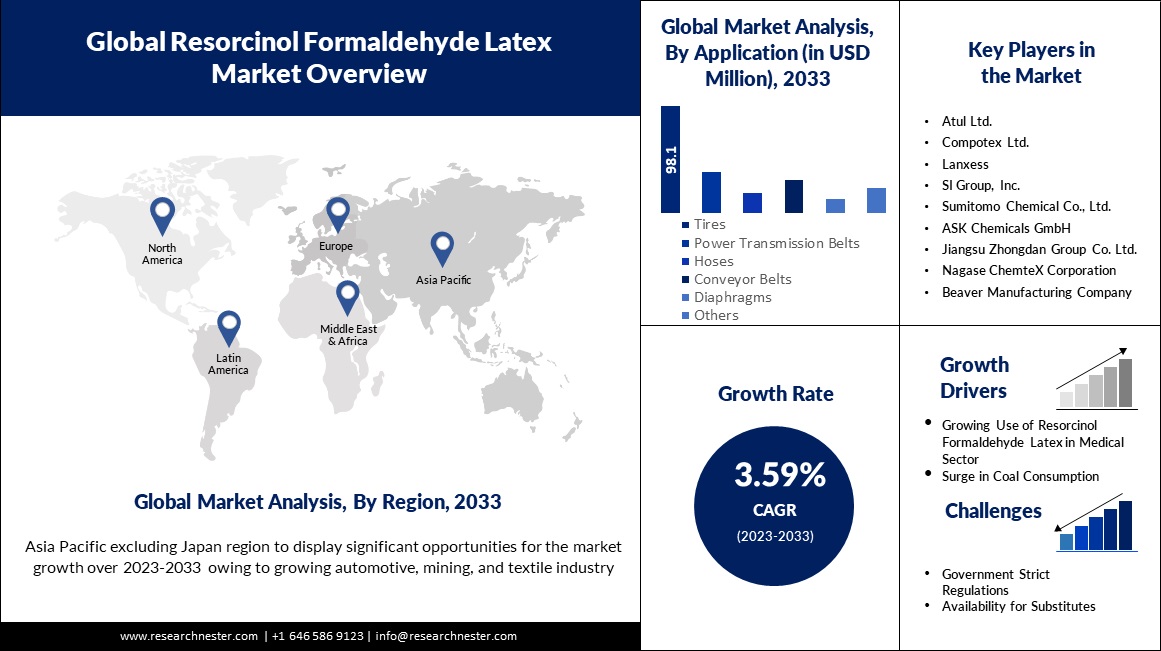 Additionally, there has been growing government initiatives in order to encourage the sale of electric vehicles which is also estimated to boost the market growth. For instance, the government of India intends to create designated electric vehicle mobility zones. In the areas the administration designates, only electric or equivalent cars would be allowed to operate. Many European nations and China have such rules in place. Also, the Production Linked Incentive for Advanced Chemistry Cell Battery Storage (PLI-ACC Scheme) was introduced by the Department of Heavy Industry in June 2021. The organization's objective is to persuade both domestic and foreign investors to make investments in India's Giga scale ACC manufacturing plants. Further, other than tires, rubber is also used for various other applications which includes, diaphragms, hoses, and conveyor belts. Therefore, this is expected to create opportunity for the growth of the market for resorcinol formaldehyde latex.

Rayon are extensively used in medical industry in order to manufacture surgical wraps and bandages which are further used for dressing wound especially after surgeries. This dressing is applied directly to the wound bed and offer the benefits of less adhesion to the wound as well as the flexibility to mold into deeper wound depressions in order to fill empty space and offer absorption. Hence the growing number of surgeries is estimated to boost the demand for rayon. A startling 310 million major procedures are carried out every year over the world, with between 40 to 50 million taking place in the United States and 20 million in Europe.

Global coal output in 2019 were expected to be 7.9 billion tonnes, up 116 million tonnes from 2018. 79% of the world's coal production was produced by the top 5 producing nations, which includes China, India, United States, Indonesia, and Australia. Hence, owing to the surge in coal consumption the demand for conveyor belt is growing, which is further estimated to boost the market growth.

Agriculture records indicate that the state in India has the highest drip irrigation coverage in the nation, covering at least 20 lakh hectors of land in 2018. The growth of drip irrigation is therefore estimated to boost the demand for hoses.

Overall tire shipments from the United States reached about 300 million units in 2021. With almost 220 million units, replacement passenger tires accounted for the majority of tire units supplied in 2021.

The global resorcinol formaldehyde latex market is segmented and analyzed for demand and supply by application into tires, power transmission belts, hoses, conveyor belts, diaphragms, and others. Out of which, the tires segment is anticipated to garner the highest revenue of USD 98.1 Million by the end of 2033, up from a revenue of USD 66.9 Million in the year 2022. Further, the segment is anticipated to grow at a highest CAGR of 4.01% over the forecast period. This growth of the segment can be attributed to growing demand for autonomous vehicles, which is further estimated to boost the production of tires. Autonomous vehicle sales are predicted to increase between 2019 and 2030. There were about 1 million vehicles sold globally in 2019 that had at least Level 3 autonomy, according to estimates. It is anticipated that approximately 57 million of these vehicles would be sold worldwide in 2030.

The global resorcinol formaldehyde latex market is also segmented and analyzed for demand and supply by type into rayon, nylon, fiberglass, polyester, and others, amongst which the nylon segment is anticipated to generate largest revenue of USD 107.4 Million by the end of 2033, up from a revenue of USD 71.7 Million in the year 2022. Additionally, the segment is estimated to grow at a CAGR of 4.23% over the forecast period. This segment growth can be attributed to growing application for the production of conveyer and seat belts, airbags, parachutes, nets and ropes, tarpaulins, thread, and tents using nylon-based resorcinol formaldehyde latex. Further, there has been growth in bulk transportation which in boosting the demand for conveyor, hence driving the growth of the segment.

The Asia Pacific, excluding Japan resorcinol formaldehyde latex market, amongst the market in all the other regions, is projected to hold the largest market revenue of USD 124.7 Million by the end of 2033, up from a revenue of USD 83.0 Million in the year 2022. Further, the market in this region is estimated to grow at a CAGR of 4.23% over the forecast period, backed by growing automotive, mining, and textile industry, along with existence of the largest automotive production base in the world and fierce competition amongst various producers in the region, including China, India, Thailand, and others. Additionally, there has been growing demand for electric vehicles in this region. Climatic change is causing havoc in Asia, with climate concerns affecting six of the top 10 Asian countries. Moreover, a major contributor to greenhouse gas emissions is the transportation industry. Hence, the market for electric vehicles is rapidly expanding as a preventative measure against GHG emissions. China had the greatest electric car sales in the Asia Pacific area in 2021, with over 2 million electric vehicles sold. In contrast, approximately 9 thousand electric vehicles were sold in New Zealand in 2021.

1) What are the major factors driving the growth of the market?

Ans: The major factors driving the growth of the market are growing use of resorcinol formaldehyde latex in medical sector, surge in coal consumption, rising demand for autonomous vehicles, and others.

2) What would be the CAGR of market over the forecast period?

3) What are the challenges affecting the market growth?

Ans: Government strict regulations, availability of substitutes, and elimination of toxic monomeric isocyanates during dipping process estimated to be the growth hindering factors for the market expansion.

4) Which region will provide more business opportunities for growth of market in future?

Ans: The market in the Asia Pacific excluding Japan region is projected to hold the largest market share by the end of 2033 and provide more business opportunities in the future.

5) Who are the major players dominating the market?

7) What are the segments in the resorcinol formaldehyde latex market?

Ans: The market is segmented by type, application, and by region.

8) Which segment captures the largest market size in the application segment in the resorcinol formaldehyde latex market?

Ans: The tires segment is anticipated to garner the largest market size by the end of 2033 and display significant growth opportunities.