The global conveyor belt market is estimated to garner a notable revenue by growing at a CAGR of ~6% over the forecast period, i.e., 2022–2030. The growth of the market can be attributed to the increasing use of conveyor belts in the various end-user industries, such as, mining, and construction. The growth in these end-user industries is anticipated to positively impact the growth of the conveyor belt market. Moreover, increasing number of airports, backed by rising passenger footfall in the aviation industry is projected to boost the market growth. For instance, more than 60 airports are under construction globally, which will operate by the end of 2021. Similarly, the growing mining activities around the world, is estimated to up-surge the growth of the market. In 2019, the total revenue of the major mining companies crossed USD 700 billion, whereas the total revenue is estimated to amount over USD 1050 billion. 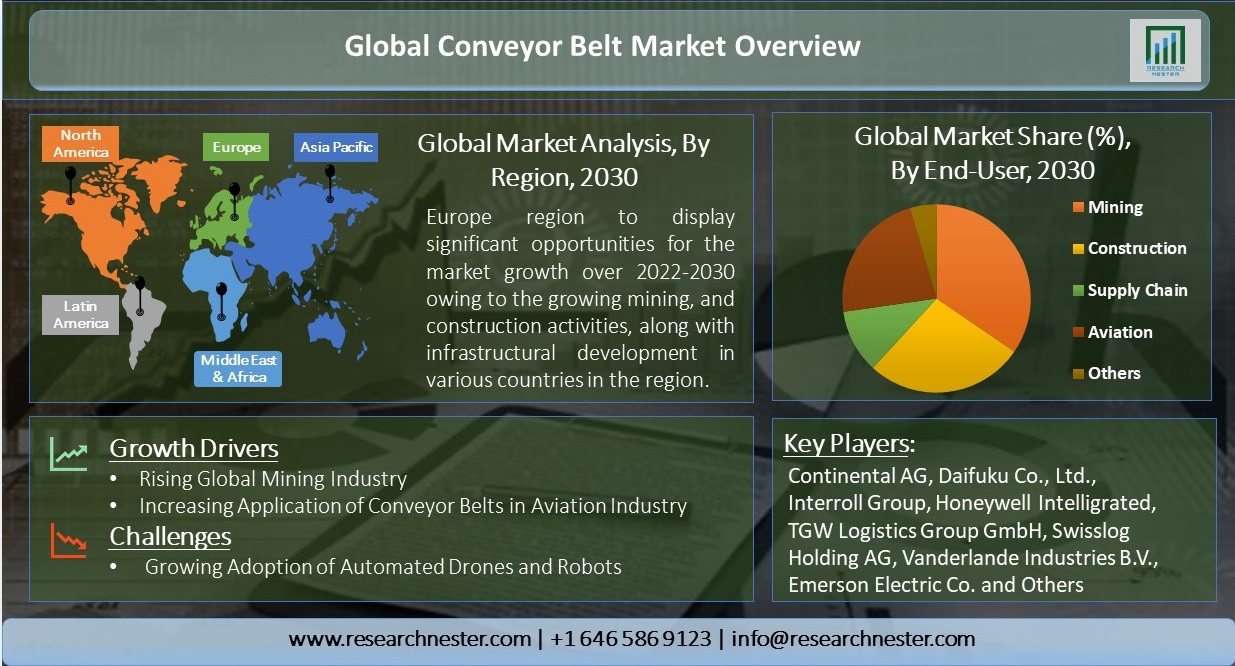 The global conveyor belt market is segmented by material into metal, polymers, and others, out of which, the polymers segment is anticipated to hold the largest share in the market during the forecast period on account of increasing innovation in building new and better polymers, such as, polyester. Moreover, the fluctuating prices of metals, is estimated to promote the polymers segment growth.

On the basis of end-user, the market is segmented into mining, construction, supply chain, aviation, and others, out of which the mining segment is anticipated to garner the highest share in the market over the forecast period, owing to the growing investment and revenue generated in the industry. Moreover, conveyor belts are a necessity for mines to transport heavy material. Alternatively, the supply chain segment is also anticipated to gain significant share throughout the forecast period, on the back of the rising manufacturing sector in developing nations.

Regionally, the global conveyor belt market is segmented into five major regions including North America, Europe, Asia Pacific, Latin America and Middle East & Africa region. The market in Asia Pacific region is estimated to garner largest share over the forecast period on the back of growing mining and manufacturing activities in the region. According to the World Bank, in 2019, 13.793% of the total GDP of South Asia was contributed by manufacturing sector. Growth of supply chain industry in countries, such as, China, Vietnam, and India, is estimated to drive the market growth in the region.

The market in the Europe region is estimated to grow with the highest CAGR over the forecast period, owing to the increasing mining activities in countries, such as, Russia, with more than 130 coal mines, 70% of the world’s lead reserve, and major mines for copper, gold, iron, nickel, and other metals. Moreover, growth in the construction and aviation industry, especially in the western Europe, is estimated to boost the market growth. According to the data by the Organization for Economic Co-operation and Development (OECD), in 2019, Germany spent USD 1.88 billion for construction of airports, while France spent USD 1.029 billion for the same. 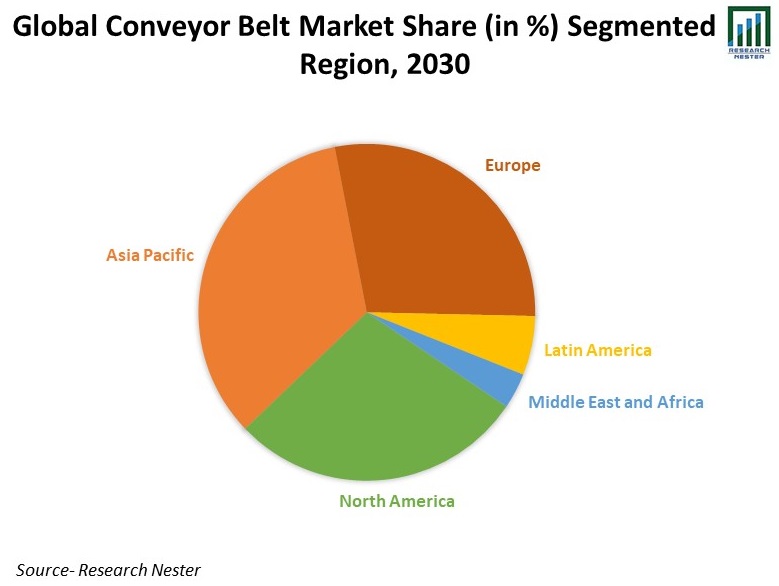 The global conveyor belt market is further classified on the basis of region as follows:

Our in-depth analysis of the global conveyor belt market includes the following segments:

What are the major factors driving the growth of the Conveyor Belt market?

What would be the CAGR of Conveyor Belt market over the forecast period?

What are the challenges affecting the Conveyor Belt market growth?

Increasing use of drones and robots is one of the major factors estimated to hamper the market growth.

Which region will provide more business opportunities for growth of Conveyor Belt market in future?

The market in the Asia Pacific will provide the highest growth opportunities for the market during the forecast period on the back of rising manufacturing industry in the region.

Who are the major players dominating the Conveyor Belt market?

What are the segments in the global conveyor belt market?

The market is segmented by material, application, end-user, and by region.

Which segment captures the largest market size in the end-user segment in the conveyor belt market?

The mining segment is anticipated to hold the largest market size over the forecast period owing to the growing mining activities, globally.