·   February 26, 2019: The Centre for Ocular Research & Education (CORE) and Meso Scale Diagnostics, LLC announced the initiative to use the Meso Scale Discovery platform to identify biomarkers in the tear film.

The global prognostic biomarkers market is estimated to garner a sizeable revenue by growing at a significant CAGR over the forecast period, i.e., 2021–2030. The growth of the market can be attributed to the recurrence of chronic diseases, even after complete treatment. Diseases, such as, cancer, depression, hepatitis B and C, eczema, and autoimmune diseases tend to come back, despite successful treatment, due to genetic structure of patients, or other factors. The recurrence rate of cancer varies from type to type, with breast, bladder, and leukemia cancer having 20-30% chances of recurrence, while ovarian cancer and glioblastoma have 85-90% recurrence rate. Prognostic biomarkers are used to study likely patient health outcome, which is estimated to drive the growth of the market. Moreover, increasing medical research and advancement, along with expanding personal disposable income and health awareness among people is estimated to boost the market growth. 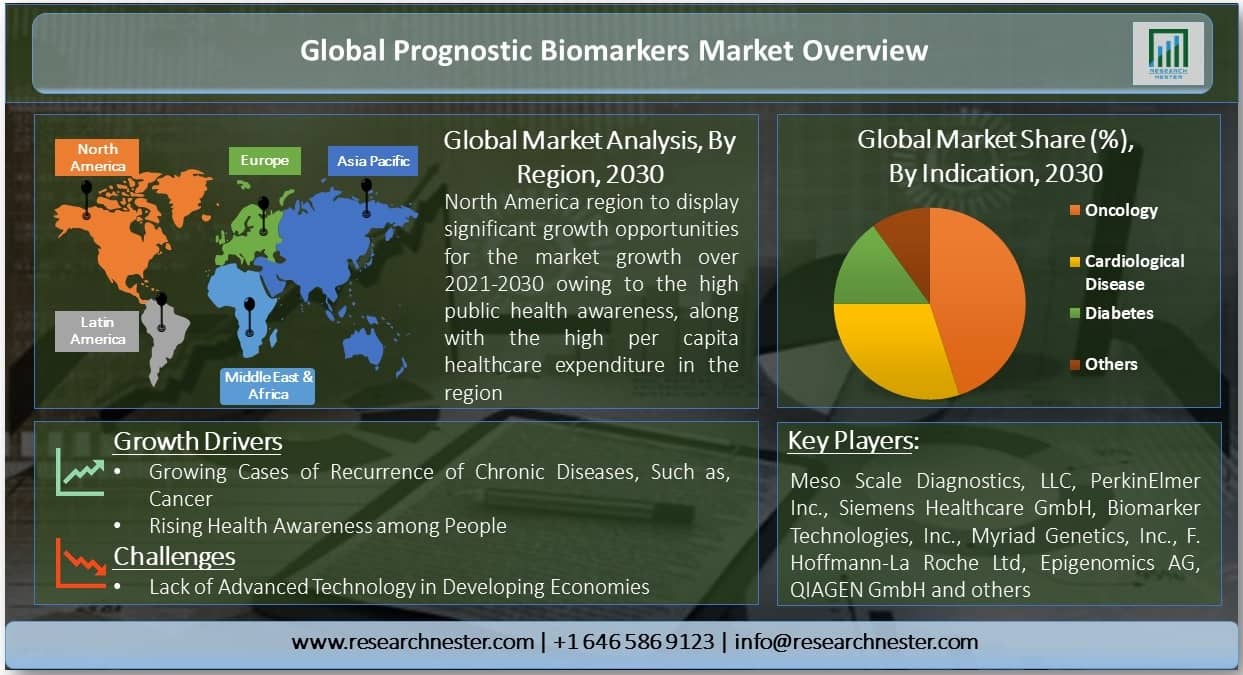 The global prognostic biomarkers market is segmented by indication into oncology, cardiological diseases, diabetes, and others, out of which, the oncology segment is anticipated to hold the largest share in the market during the forecast period on account of high rate of recurrence of cancer, along with increasing prevalence of cancer. According to a report by the World Health Organization (WHO), cancer is the second leading cause of death, causing one out of every six deaths globally. In the year 2020, more than 10 million deaths were caused by cancer. In other report WHO stated that 30% to 50% of the cancer cases can be prevented by avoiding risk factors and early diagnosis.

According to the statistics by the World Health Organization, the global per capita healthcare expenditure amounted to USD 1,064.741 in the year 2017. The worldwide healthcare expenditure per person grew from USD 864.313 in 2008 to USD 1,110.841 in 2018, where the U.S. is the top country that amounted to healthcare expenditure of USD 10, 623.85 per capita in 2018. As of 2018, the domestic general government healthcare spending in the U.S. was USD 5355.79, which grew from USD 3515.82 in 2008. These are some of the factors responsible for market growth over the past few years. Moreover, as per the projections by the Centers for Medicare & Medicaid Services (CMS), the estimated average annual percent change related to National Health Expenditures (NHE) in the U.S. was 5.2% in 2020 as compared to 2019 (4.5%). Furthermore, the National Health Expenditures are projected to reach USD 6,192.5 Billion in 2028, where the per capita expenditure is estimated to touch USD 17,611 in the same year. These are notable indicators that are anticipated to create lucrative business opportunities in upcoming years. CLICK TO DOWNLOAD SAMPLE REPORT

Regionally, the global prognostic biomarkers market is segmented into five major regions including North America, Europe, Asia Pacific, Latin America and Middle East & Africa region. The market in North America region is estimated to garner largest share over the forecast period on the back of increasing health awareness among people, along with high per capita healthcare expenditure by the government. According to other report of the WHO, per capita healthcare expenditure in North America valued around USD 10,050.279 in the year 2018.

The market in the Europe region is estimated to witness highest CAGR over the forecast period owing to the high prevalence of cancer, and other chronic disease, backed by the growing geriatric population and advancing medical facilities.

The market in the Asia Pacific is also projected to record notable growth over the forecast period, owing to the increasing incidences of diseases, such as, diabetes, and hypertension among the exponentially growing population with over 65% of the population in the region suffering from diabetes, backed by the changing lifestyle in the region. Moreover, growing healthcare sector, along with the economic growth in the region, is estimated to boost the market growth. 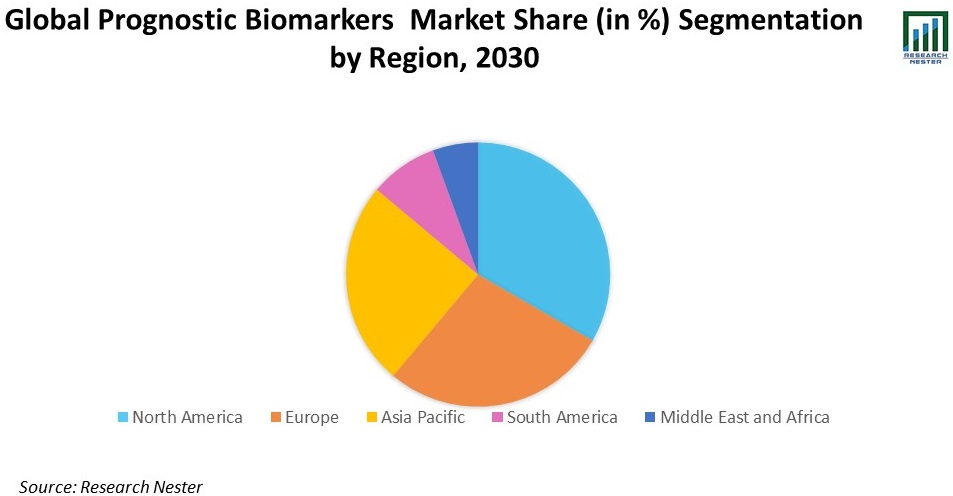 The global prognostic biomarkers market is further classified on the basis of region as follows:

Our in-depth analysis of the global prognostic biomarkers market includes the following segments:

1) What are the major factors driving the growth of the prognostic biomarkers market?

Ans: Rising cases of chronic disease recurrence is one of the major factors driving the market growth.

2) What would be the CAGR of prognostic biomarkers market over the forecast period?

Ans: The market is anticipated to attain a significant CAGR over the forecast period, i.e., 2021-2030.

3) What are the challenges affecting the prognostic biomarkers market growth?

Ans: Lack of advanced medical technologies in the developing countries is one of the major factors estimated to hamper the market growth.

4) Which region will provide more business opportunities for growth of prognostic biomarkers market in future?

Ans: The market in the North America is estimated to provide most growth opportunities owing to the increasing health awareness among the public, coupled with high per capita healthcare expenditure.

5) Who are the major players dominating the prognostic biomarkers market?

7) What are the segments in the prognostic biomarkers market?

Ans: The market is segmented by indication, end-user, and by region.

8) Which segment captures the largest market size in the indication segment in the market?

Ans: The oncology segment is anticipated to hold largest market size over the forecast period owing to the rising incidences of cancer recurrence among patients.