· February 26, 2019: The Centre for Ocular Research & Education (CORE) and Meso Scale Diagnostics, LLC announced the initiative to use the Meso Scale Discovery platform to identify biomarkers.

The global predictive biomarkers market is estimated to gain a significant CAGR over the forecast period, i.e., 2022–2030. The growth of the market can be attributed to the advantages of early detection, and prediction of disease and its severity provided by predictive biomarkers. The use of predictive biomarkers can significantly reduce the healthcare expenditure, as these measure the probability of response or lack of response of a particular therapy, which is estimated to boost its demand throughout the forecast period. Predictive biomarkers can significantly reduce the treatment expenditure, which gives them an edge over predisposition biomarkers. Moreover, the rising prevalence of chronic diseases, such as, cancer, and diabetes along with increasing government policies to reduce the cases of such diseases, is anticipated to promote the market growth. According to the data by the World Health Organization (WHO), over 422 million people around the world suffer from diabetes, and it causes about 1.6 million deaths every year, whereas cancer caused over 10 million deaths in 2020. Furthermore, adoption of advanced technologies and growing R &D activities for medical sector, is projected to boost the market growth. 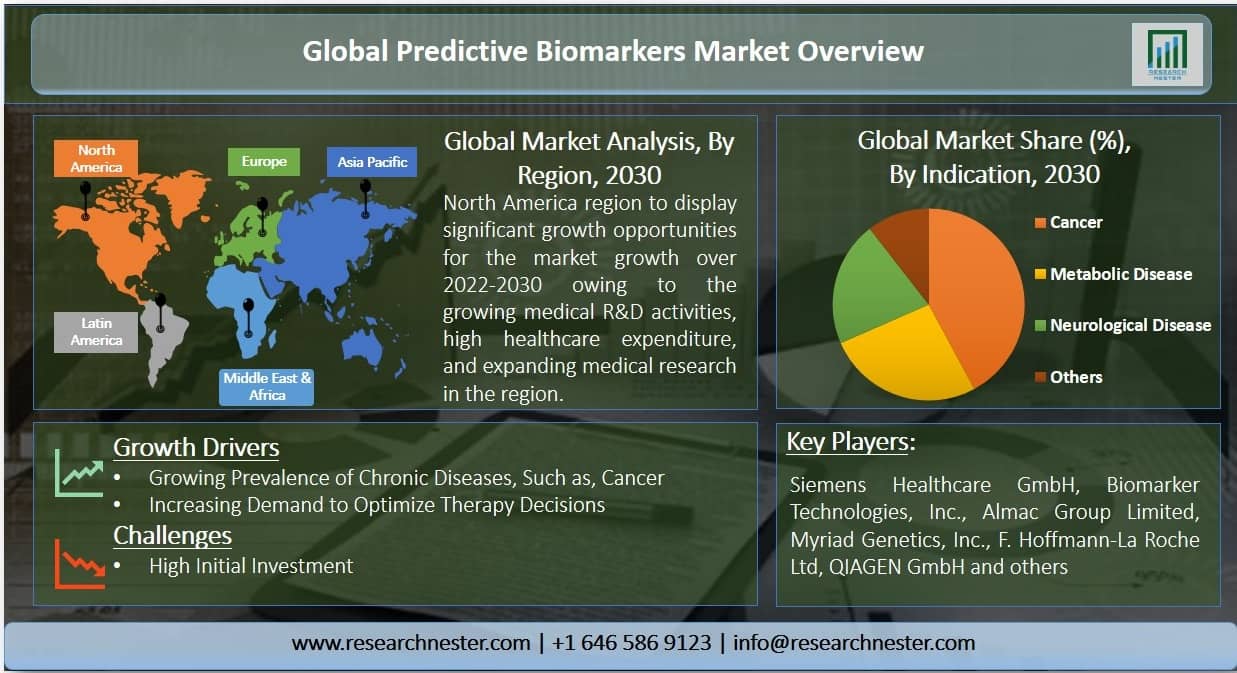 The global predictive biomarkers market is segmented by application into screening, analysis, diagnosis, prediction, monitoring, and others, out of which, the prediction segment is anticipated to hold a notable share in the market during the forecast period on account of rising demand for measuring the likelihood of results of any treatment procedure. Predictive biomarkers are highly used to forecast the affects of treatment on patients, which helps medical professionals to provide specific medications. On the basis of indication, the market is segmented into cancer, metabolic disease, neurological disease, and others, out of which the cancer segment is anticipated to hold the largest share during the forecast period, owing to the increasing incidence of cancer, along with the rising requirement to study the response of treatment on patients. As per other statistics of the WHO, cancer is the second leading cause of death globally, accounting for almost 9.6 million deaths, in the year 2018. CLICK TO DOWNLOAD SAMPLE REPORT

Regionally, the global predictive biomarkers market is segmented into five major regions including North America, Europe, Asia Pacific, Latin America and Middle East & Africa region. The market in the North America region is estimated to hold the largest market share over the forecast period owing to the advanced research and development activities in the healthcare sector along with the innovative clinical experiments. Furthermore, high investments for the development of new diagnostic tools, and high healthcare expenditure in countries, such as, the U.S., is estimated to boost the market growth. According to the data by World Bank, 16.416 % of the GDP was spent on the healthcare sector in North America in 2018. The market in the Asia Pacific is estimated to witness noteworthy growth accounting to the increasing geriatric population, along with increasing cases of cancer, and diabetes. Over 60% of the total population of the Asia Pacific currently suffers from diabetes. According to the National Library of Medicine, western Pacific region has more than 138.2 million people suffering from diabetes, and the number is estimated to rise to 201.8 million by 2035. 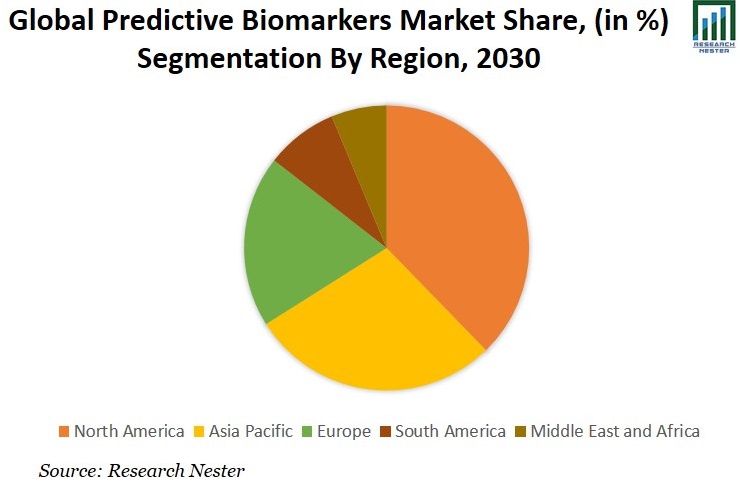 The global predictive biomarkers market is further classified on the basis of region as follows:

Our in-depth analysis of the global predictive biomarkers market includes the following segments:

What are the major factors driving the growth of the predictive biomarkers market?

Rising prevalence of chronic disease, and growing R&D investment for medical research are the major factors driving the market growth.

What would be the CAGR of predictive biomarkers market over the forecast period?

The market is anticipated to attain a significant CAGR over the forecast period, i.e., 2022-2030.

What are the challenges affecting the predictive biomarkers market growth?

Lack of efficient healthcare system in developing countries is one of the major factors estimated to hamper the market growth.

Which region will provide more business opportunities for growth of predictive biomarkers market in future?

The market in the North America is estimated to provide most growth opportunities owing to the efficient healthcare sector and growing medical R&D activities.

Who are the major players dominating the predictive biomarkers market?

What are the segments in the predictive biomarkers market?

The market is segmented by indication, application, end-user, and by region.

Which segment captures the largest market size in the application segment in the market?

The predictive segment is anticipated to hold largest market size over the forecast period on the back of increasing demand to optimize therapy decisions.