The global power generation market is estimated to grow at a CAGR of ~4% over the forecast period, i.e., 2022 – 2030. The growth of the market can be attributed to the increasing demand for electricity amongst the ever-increasing global population. Electricity is required for activities, from processing of food, powering the houses, and appliances running on electricity, to manufacturing machinery, construction and transportation, which virtually makes life impossible without power generation. This is the primary factor driving the growth of the market. Moreover, with growth in population, the demand for electricity is also rising, which is estimated to significantly boost the market growth. According to the statistics by the World Bank, the global population grew at 1.036% in 2020, with the total population reaching 7.753 billion. Although the population growth rate has decreased in the past two decade, 1.298% in 2000, and 1.17% in 2010, the total population is increasing constantly, and is expected to reach nearly 10 billion by 2050. This is estimated to boost the demand for power generation in the upcoming years. Moreover, the dependance on electricity is also increasing, as humans are relying on electric appliances now more than ever, which is anticipated to boost the market growth. Rapid urbanization, industrial development and commercialization are also raising the demand for electricity, which is estimated to boost the market growth. 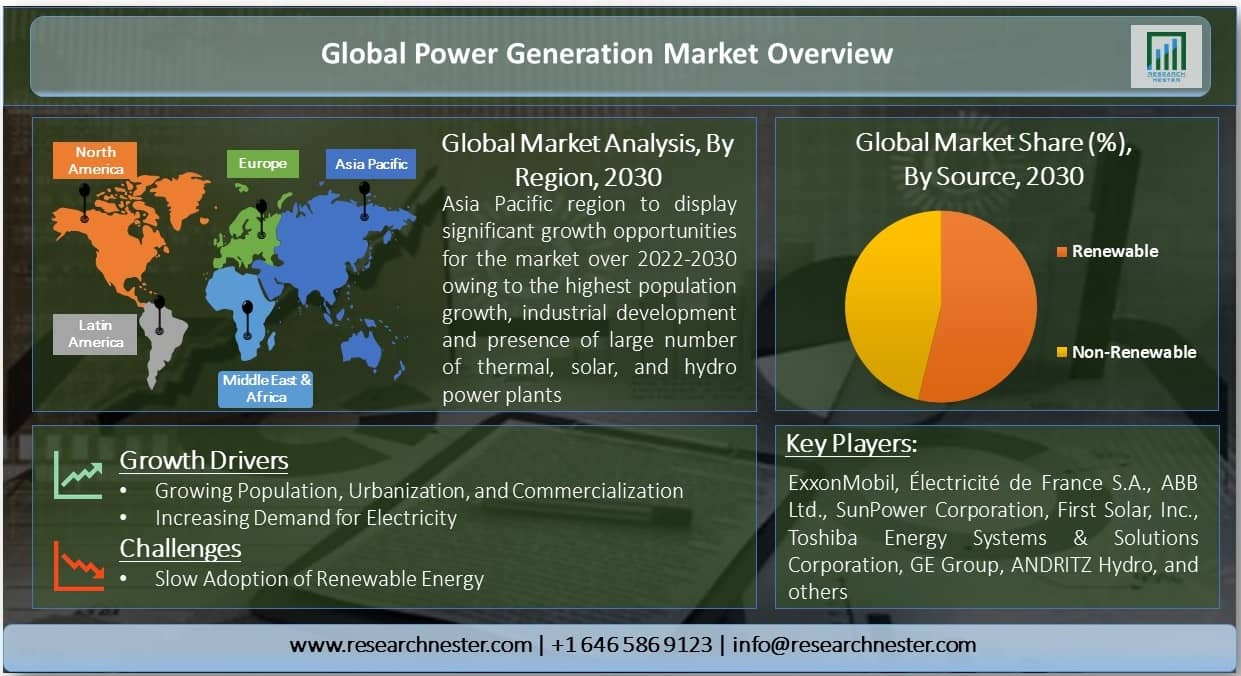 The market is segmented by application into residential, commercial, industrial, and others, out of which, the industrial segment is anticipated to hold the largest share in the global power generation market over the forecast period as the operation of any industry is highly dependent on power supply, backed by the electric-powered machines. Moreover, increasing industrial development is estimated to further boost the segment growth.

On the basis of geographical analysis, the global power generation market is segmented into five major regions including North America, Europe, Asia Pacific, Latin America and Middle East & Africa region. The market in the North America region is anticipated to gain the largest market share throughout the forecast period owing to the presence of large industries, that require huge amount of electricity. Moreover, the increasing urbanization in the developed nations, and adoption of smart electric meters and grids are estimated to boost the market growth in the region.

The market in Asia Pacific region is estimated to witness noteworthy growth over the forecast period on the back of presence of large number of power plants. These include thermal power plants, as well as hydro, solar, and other renewable source-based power plants. China currently is the largest producer of solar and hydro energy in APAC region. China produced more than 170 GW solar electricity in the year 2018, and 1,302.00 TWh hydro powerplants in 2019, as per the report by the International Hydropower Agency. 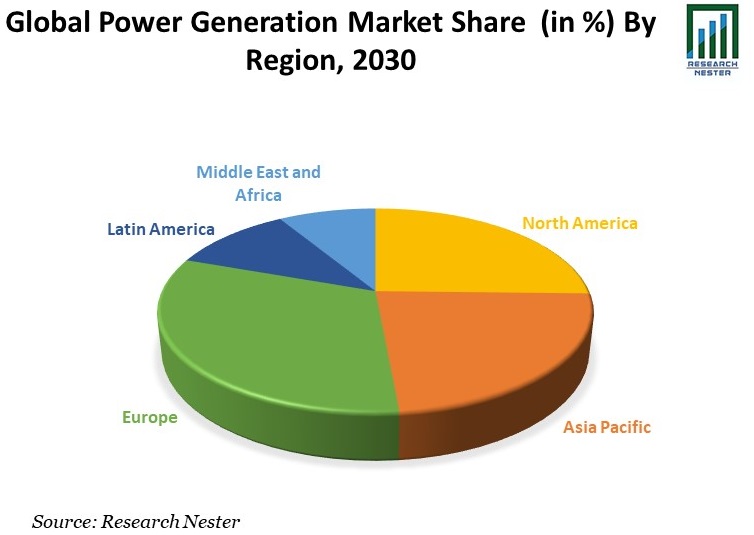 The global power generation market is further classified on the basis of region as follows:

Our in-depth analysis of the global power generation market includes the following segments:

What are the major factors driving the growth of the power generation market?

The increasing demand for electricity backed by rising population to boost the market growth.

What would be the CAGR of power generation market over the forecast period?

What are the challenges affecting the power generation market growth?

The slow adoption of renewable energy is estimated to hamper the market growth.

Which region will provide more business opportunities for growth of power generation market in future?

The market in Asia Pacific is estimated to garner the largest market share owing to the large number of commercial utility-scale solar farms and hydro power stations in the region.

Who are the major players dominating the power generation market?

What are the segments in the power generation market?

The market is segmented by source, application, and by region.

Which segment captures the largest market size in source segment in the power generation market?

The renewable segment is anticipated to hold largest market size over the forecast period and display significant growth opportunities, owing to the increasing adoption of renewable source.