Physical security is referred to the implementation of security solutions for keeping intruders away. It describes the measures to protect the assets from real-world threats and crimes and also includes access control, video surveillance system and testing. These systems include hardware, software and services. The global perimeter security market was valued at USD 16,010 Million in 2018 and is expected to grow up to USD 30,245.1 Million by 2028, at a CAGR of 7.56% over the forecast period, i.e. 2020-2028. The overall market's progressive growth is propelled by the adoption of perimeter security systems such as video surveillance and access control systems across various industries such as commercial, residential, and various others. Moreover, technological advancements in wireless technology and the convergence of physical and electronic spaces, integration of smart technologies such as cloud and IoT (Internet of Things) for surveillance systems that also plays a crucial role in improving the perimeter security systems for applications such as facial recognition, intelligent monitoring, fingerprint scanning, iris recognition, and others, along with the increasing technological advancements such as the transition from analog to the built-in IP network system are further anticipated to boost the perimeter security market's growth.

Growth Highlights Based on Region During 2018-2028

The global perimeter security market is segmented by regions into North America, Latin America, Europe, Asia Pacific, Middle East and Africa. Among these regions, the market in North America registered the largest market share of 39.7% in the year 2019 owing to the growing adoption of advanced perimeter security systems. The market in the region accounted for USD 6,354.4 million in 2018 and is anticipated to reach USD 11,423.6 million by 2028, at a CAGR of 7.02% over the forecast period. Significant investment in the security infrastructure is observed in recent years, which has positively impacted the perimeter security system's adoption rate in recent years across the region. Moreover, various transportation systems and public facilities in the region, such as railways, bus stations, and airports, are focusing on safeguarding the infrastructure by adding additional security layers. Additionally, the regional market is also driven by rising investments by SMEs in perimeter security solutions, followed by a strong economic growth in the region. 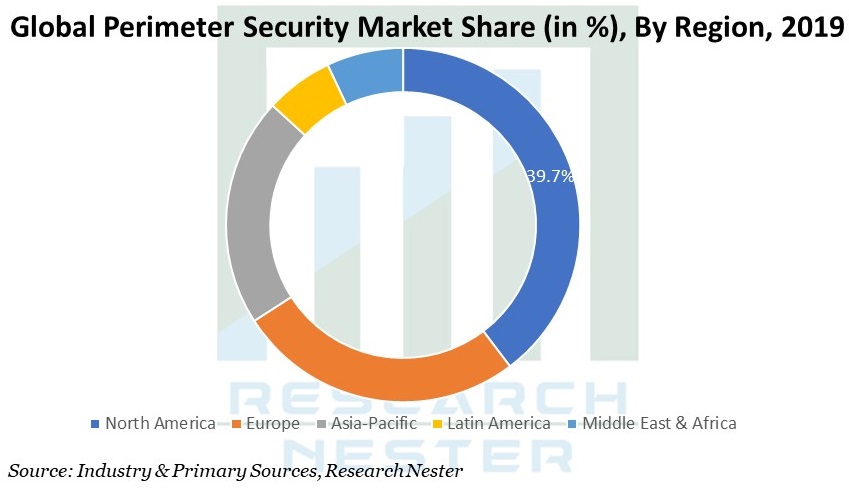 The global perimeter security market is segmented on the basis of components into systems and services. The systems segment, which held the largest market share in the year 2019, accounted for USD 11,829.1 Million in 2019 and is expected to grow up to USD 19,605.3 Million by 2028, at a CAGR of 7.18% during the forecast period. The systems segment is further segmented into video surveillance system, access control system and perimeter intrusion detection system, out of which, the video surveillance system segment is expected to hold the largest market share. Video surveillance system consists of hardware such as IP & analog cameras and recorders, along with software, such as VMS or video management software. The growing concerns regarding public safety and rise in the number of thefts along with the growing adoption of IP cameras are anticipated to spur the growth of the video surveillance system segment. On the other hand, access control systems consist of biometrics, locks, card readers, control panels, motion detectors, intercom, and active & passive barrier among others. The growing use of biometrics such as fingerprint scanning, facial recognition & iris scanner along with the growing demand for electronic locks in the construction industry is expected to positively impact the growth of access control systems segment. Apparently, the perimeter intrusion detection system consists of sensors, intelligent lighting and immediate & visible alarms. Stringent government regulations to curb infiltration and the need to improve perimeter security are providing lucrative growth opportunities to vendors of various security systems such as perimeter intrusion detection & prevention and video surveillance systems.

Security and surveillance are one of the primary sectors of smart city projects which involve a significant amount of investment. Several smart cities projects are going on across the globe, which addresses the need to install perimeter security solutions to enhance the security and surveillance of the area. For instance, in 2015, the Government of India launched the smart city mission to modernize the existing tier 1 and tier 2 cities so that better utilization of the resources can be made. As a part of this project, India considered a plan to install smart technologies, where there would be a substantial deployment of security systems, such as perimeter intrusion detection systems and video surveillance systems. As per the Ministry of Housing and Urban Affairs, India's government has announced a smart city project in the country under which it targets to make 100 smart cities with the public and government investment of nearly US $27 billion. As a result, public safety and security would be paramount for city administrations, which in turn is anticipated to influence the global perimeter security market in the near future.

According to the US Department of Justice, in 2018, the crime rate pertaining to property was assessed at 2,199.5 per 100,000 inhabitants. Larceny accounted for over 72.5%, burglary at 17.1, and motor vehicle thefts registered at 10.4% of the United States' total property crimes. 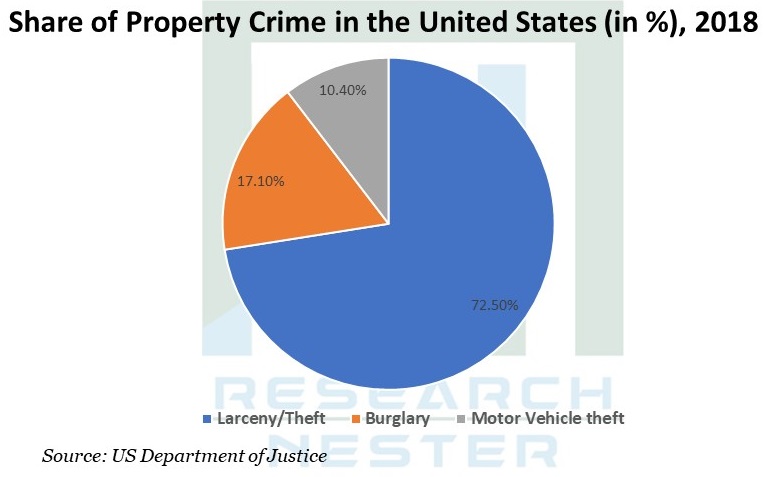 The vast numbers of property crimes and growing terrorist attacks across the globe are anticipated to drive the demand for perimeter security systems during the forecast period. Moreover, on account of the growing property crime offenses, there is a growing demand for door security options such as electronic doors and biometrics authentication in residential premises, which in turn is anticipated to drive the global perimeter security market.

The implementation of IoT in security solutions offers numerous ways to improve the perimeter security system; however, data privacy also remains one of the major concerns for perimeter security solutions incorporating IoT. CCTV cameras, recorders, and access control systems, among others, are upgrading and are rapidly shifting to the wireless platform, which involves IoT. This system contains a considerable amount of users’ data, which, if exposed or breached, could pose a severe threat to the user—thereby acting as a restraining barrier for market growth.

What are the major factors driving the growth of the Perimeter Security market?

Increasing need for deployment of perimeter security solutions to enhance the security and surveillance of smart cities are some of the major factors that are driving the growth of the market.

What would be the CAGR of Perimeter Security market over the forecast period?

Which region will provide more business opportunities for growth of Perimeter Security market in future?

The market in Europe is anticipated to display significant business opportunities in the future.

Who are the major players dominating the Perimeter Security market?

What are the major segments in the global perimeter security market?

What can be the significant growth opportunity for the components segment in the perimeter security market?

The systems segment, which is a sub-segment of the components segment, held the largest market share in the year 2019 and is anticipated to display significant growth opportunity.

Concerns for the threat on data privacy is one of the major factors anticipated to act as a barrier towards the growth of the global perimeter security market.