Paints and Coatings are pigmented as well as non-pigmented liquid or liquefiable compositions that turns into a solid film after application which are universally used for surface protection, as well as color or texture protection of objects. These are the substrates applied on the surface of objects for decorative or functional purposes. These formulations hold the dual use of protecting the substrate and being decorative. These formulations hold the capacity of modifying a substrate’s surface properties such as, wettability, adhesion, wear resistance and corrosion resistance. Some of them also offer the properties to alter magnetic response or electrical conductivity on the substrate’s surface.

On account of increasing demand for consumer goods with expanding end-user industries, the paints and coatings market is expected to grow with a CAGR of 5.3% over the forecast period i.e. 2019-2027. Their growing demand can be attributed to rising per capita income of the increasing population across the globe. Rapid industrialization and commercialization accompanied with increasing number of various-end-user industries is estimated to impact the growth of the market positively during the forecast period. Increasing use of metals since the past decade and growing advancements to make metals corrosion-resistant as well as to provide UV resistance to some types of metals and materials will further boost the market shares across the globe. Growing OEM sector with rising number of developing economies will drive the market robustly over the forecast period.On the basis of regional platform, the global paints and coatings market is segmented into five major regions including North America, Europe, Asia Pacific, Latin America and Middle East & Africa region.

North America is expected to hold the highest shares in the overall paints and coatings market on the back of presence of bigger market players across the region. Europe is attributed to induce a positive growth in the market on account of steady demand for paints and coatings in marine and defense sector.

Asia Pacific is anticipated to follow North America and display the highest growth on the back of widespread urbanization in the region along with massive infrastructure developments across the countries such as, India, China, Malaysia and others during the forecast period.

The rise in building and construction industry on the back of increasing urbanization has accentuated the demand for paints and coating for architectural applications which is expected to drive the market considerably over the forecast period. Additionally, worldwide use of paints and coatings in metallic construction structures to prevent corrosion is estimated to propel their demand in construction sector. Moreover, increasing commercial constructions across the developing economies around the world is estimated to expand the market substantially in upcoming years.

On the back of increasing trend towards motorization and rising sales of automotive, majority of automotive manufacturers are planning to establish their manufacturing and assembly plants across the developing economies. These factors are anticipated to increase the market shares in the automotive sector over the forecast period. The applications of paints and coatings have significantly increased in the aerospace industry on account of expanding and modernizing of aerospace equipment and vehicles both in commercial and defense sector.

Increasing applications of paints and coatings to protect machines and equipment from rusting and corrosion in various end-user industries is expected to propel the market revenue across the globe. Further, their applications as a decorative factor in consumer goods will expand the market significantly over the forecast period. Furthermore, the current period of major consolidation in paints and coating industry is estimated to drive the market. This can be attributed to surging efficiencies and increasing leverage with customers and suppliers. The consolidation period has allowed the diversification of the product range along with process improvement which will contribute vibrantly in the growth of the market over the forecast period. Their properties have zero pot life issues, and their low energy costs make them an attractive choice for various end-users.

Factors such as volatile prices along with increasing concerns regarding environmental sustainability are expected to hinder the growth of paints and coatings market further over the forecast period.

Global Paints and Coatings Market is further classified on the basis of region as follows: 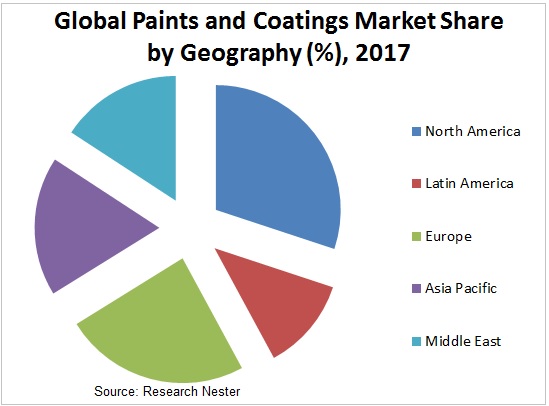