Packaged vegan foodis a vegan diet which does not include anything of animal product e.g. meat, eggs, dairy products, and all other animal-derived ingredients.As a result, vegan foods are perceived to be safer and healthier and hence are preferred more over meat. Vegans across the world avoid eating animal foods for environmental, ethical or health reasons. Packaged vegan food are prepared using plant-based ingredients that provide phytochemicals without including any of the animal-based ingredients. It has negligible fat and cholesterol and is known for providing several nutritional and health benefits, such asboosting the body's defensive enzyme.

Changing eating habits and rising health awareness of the global population, combined with the ongoing trend of veganism and the growing concern towards animal rights are some of the significant factors boosting the market growth. The packaged vegan food market is anticipated to record a significant CAGR over the forecast period, i.e., 2020-2028. The market is segmented by product into dairy, bakery and confectionery, and others. Among these segments, the segment for dairy is anticipated to hold the leading share in the market on account of widening of customer base in dairy products such as cheese, yogurt, and ice cream. Further, with the introduction of flavoured vegan dairy alternatives and its availability in several food stores has resulted in the increase in demand for nutritious and tasty dairy products. CLICK TO DOWNLOAD SAMPLE REPORT 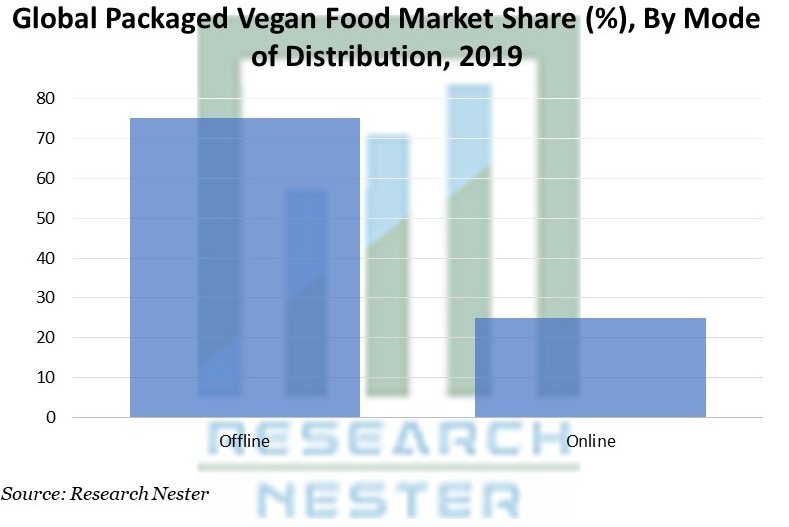 Chronic health disorders, such as diabetes and obesity are constantly increasing owing to the growing consumption of animal-based food products. Owing to such a factor, the requirement for numerous plant-based products has increased severely among the consumers, which on the other hand, has led to a rise in the demand for packaged vegan food. Moreover, plant-based products help maintain the body cholesterol and blood pressure levels and therefore lowers the risk of getting cancer.The International Agency for Research on Cancer (IARC), a WHO agency, has classified processed meat as a carcinogenand stated that eating 50 grams of processed meat every day increased the risk of colorectal cancer by 18%.  Additionally, with the contemporary introduction of the vegan concept and its associated health benefits such as providing nourishment and boosting protective enzymes in the body, makes the packaged vegan food, a top preference for consumer. This is anticipated to significantly expand the market.

A large number of people across the world are shifting towards veganism which is a practice of abstaining from the usage of animal products owing to their love and consideration toward animals and the environment. The ethical concerns regarding the consumption of meat and rising animal exploitation has led more people to prefer vegan food which is fuelling the growth of packaged vegan food market. According to the World Economic Forum, nearly 1.5 billion pigs are killed to feed for making pork, ham and sausages and half a billion sheep are taken to the abattoir every year. Further, owing to growing consumer demand for plant-based food, the market for vegan and other vegetarian food products is expanding rapidly with an array of innovative product options. On the back of these, the market is predicted to grow over the forecast period.

Our in-depth analysis of the packaged vegan foodmarket includes the following segments:

By Mode of Distribution

The market for packaged vegan food in North America is anticipated to hold the largest share in the market on account of presence of leading market players in the region which manufacture and market packaged vegan food. Moreover, rising consumer preference for healthy and nutritional food along with the convenience of easy handling and consumption of packaged food products by busy working people as well as lot of concern over animal slaughtering and its negative impact on the environmentfurther increases the product demand. The market in Asia Pacific is predicted to grow at the highest rate during the forecast period as a result of increasing health awareness among consumers owing to rise in number of diabetes and heart patients. Additionally, several food companies are keen on expanding their business, especially in countries such as China and India on account of immense growth opportunities. Furthermore, growing trend for adopting vegan lifestyle further raise the demand for packaged vegan food.

The packaged vegan foodmarket is further classified on the basis of region as follows: