The global organic acid market is estimated to garner a revenue of ~USD 20 Million by the end of 2031 by growing at a CAGR of ~6% over the forecast period, i.e., 2022 – 2031. Further, the market generated a revenue of ~USD 10 Million in the year 2021. The growth of the market can primarily be attributed to the higher utilization of organic acids in the food and beverage industry. For instance, the revenue generated by the food segment was estimated to be dropped to about USD 250 billion in 2022. 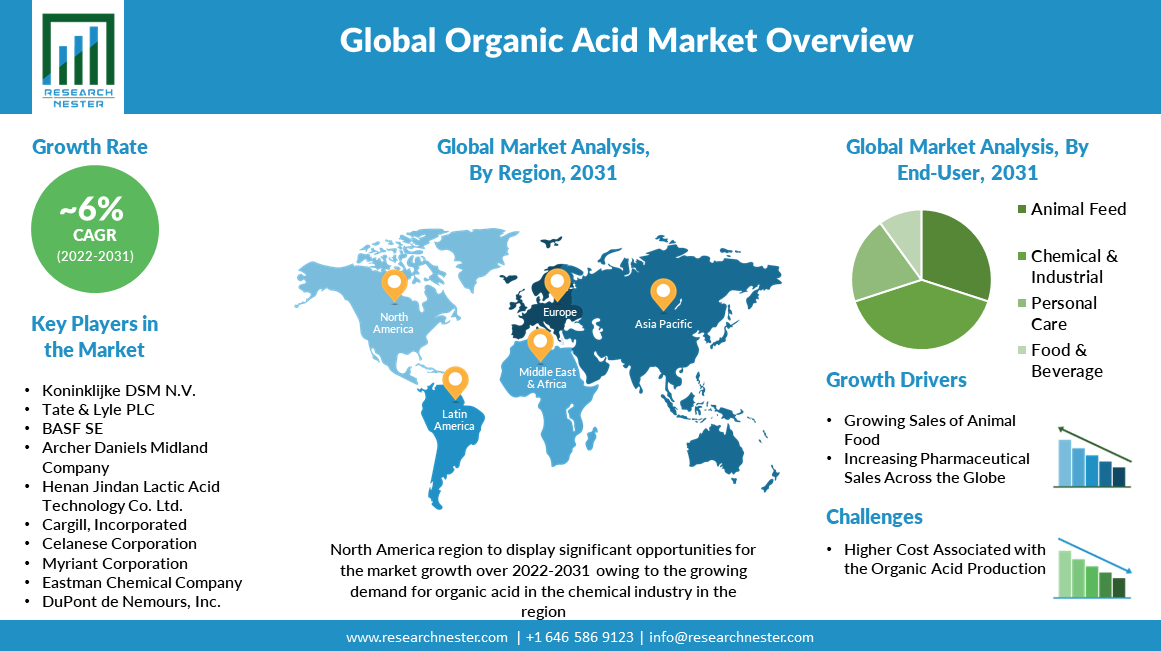 Global organic acid market trends such as, higher demand for organic acids in the personal care industry and skyrocketing utilization in the food and additive industry are projected to influence the growth of the market positively over the forecast period. It is observed that the sales of organic food dropped to around USD 50 billion in 2020 which was an increase from about USD 10 billion in 2005. Organic acids are those organic compounds that have acidic properties. These acids are added to food as flavorants & acidulants and utilized in a wide array of industries. Hence, all these factors are anticipated to hike the market growth over the forecast period.

For instance, there are about 5500 animal food manufacturing facilities observed to be working solely in the USA that produces around 250 million tons of pet food every year.

As of 2021, the entire worth of pharmaceutical sales was estimated to reach around USD 500 billion.

Acids are used in medicines and as catalysts in organic and industrialist chemistry. One of the most common examples of organic acids is carboxylic acids. Additionally, they come in many forms such as, citric, formic, lactic, malic, tartaric, oxalic, and others.

The grain production across the globe is estimated to be around 55 million tons and was projected to reach approximately 2000 million tons in the time period 2021 to 2022.

The global organic acid market is segmented and analyzed for demand and supply by end-user into animal feed, chemical & industrial, personal care, food & beverage, and others, out of which, the chemical & industrial segment is projected to witness noteworthy growth over the forecast period. The growth of the segment can be accounted to the rising utilization of organic acid in the respective industry. For instance, the revenue generated by the global chemical industry was estimated to be approximately USD 4 trillion in 2021.

Regionally, the global organic acid market is studied into five major regions including North America, Europe, Asia Pacific, Latin America and Middle East & Africa region. Amongst these markets, the market in North America is projected to hold the largest market share by the end of 2031. The growth of the market in the region is attributed to the growing demand for organic acid in the chemical industry. For instance, in 2021, the value of chemical shipment in the United States was estimated to be around USD 750 billion. Additionally, the presence of major key players and rising R&D in the production of efficient organic acids are projected to propel the growth of the market over the forecast period. 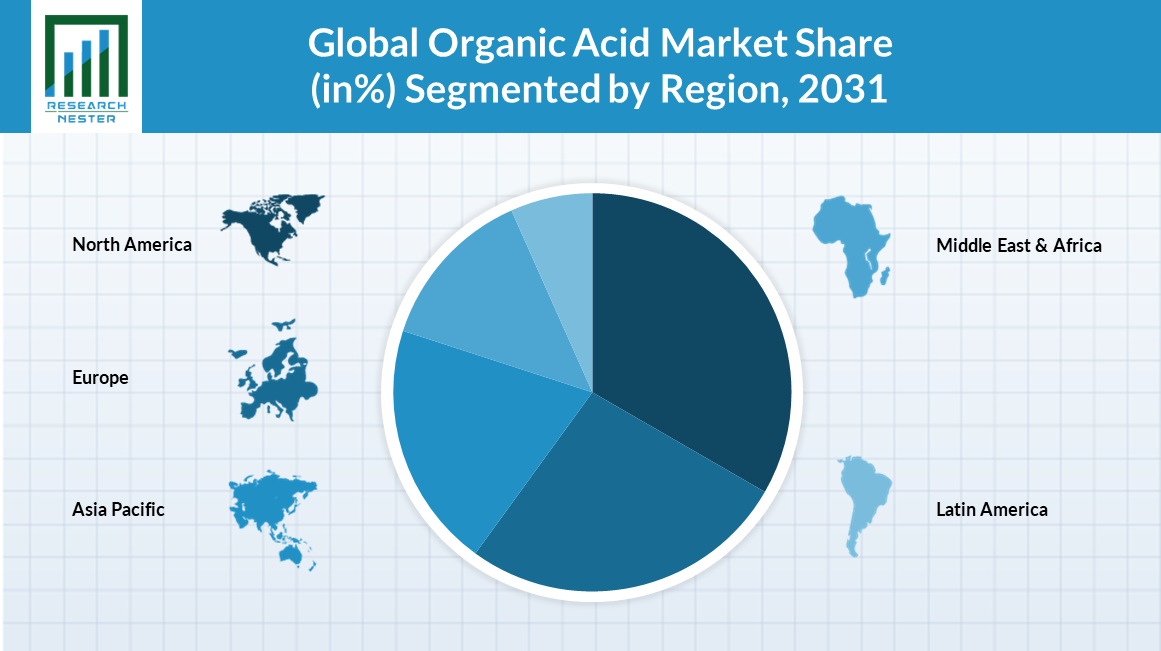 The global organic acid market is further classified on the basis of region as follows:

Our in-depth analysis of the global organic acid market includes the following segments:

What are the major factors driving the growth of the organic acid market?

Higher utilization of organic acids in the food and beverage industry and growing sales of animal food are estimated to majorly boost market growth.

What would be the CAGR of organic acid market over the forecast period?

What are the challenges affecting the organic acid market growth?

The higher costs associated with the organic acid production and disrupted supply chain due to COVID-19 are estimated to challenge the market growth.

Which region will provide more business opportunities for growth of organic acid market in future?

Who are the major players dominating the organic acid market?

What are the segments in the organic acid market?

The market is segmented by type, source, end-user, by region.

Which segment captures the largest market size in end-user in the organic acid market?

The chemical & industrial segment is anticipated to garner the largest market size by the end of 2031 and display significant growth opportunities.