The global necrotizing ulcerative gingivitis (NUG) treatment market is estimated to grow at a noteworthy CAGR over the forecast period, i.e., 2022 – 2030. The growth of the market can be attributed to the growing cases of necrotizing ulcerative gingivitis or NUG, especially amongst adults. The major causes of NUG include diet high in sugar, alcohol abuse, tobacco consumption in any form, and careless oral hygiene habits. Patients of diabetes are also at high risk of developing necrotizing ulcerative gingivitis. According to the data by the World Health Organization (WHO), diabetes caused 1.5 million deaths in 2019. The disease is characterized by ulcers in gums, and the lining between teeth, along with severe pain, bad breath, and bleeding in gums. Rising cases of oral diseases, and poor oral health are the primary factors estimated to drive the market growth. According to other statistics by the WHO, 3.5 billion people, which is nearly half of the global population, suffer from oral diseases. Almost 10% of the global population experiences gum-related problems, while 530 million children have cavities in their milk teeth. Lack of awareness regarding oral health is another major factor projected to boost the market growth. 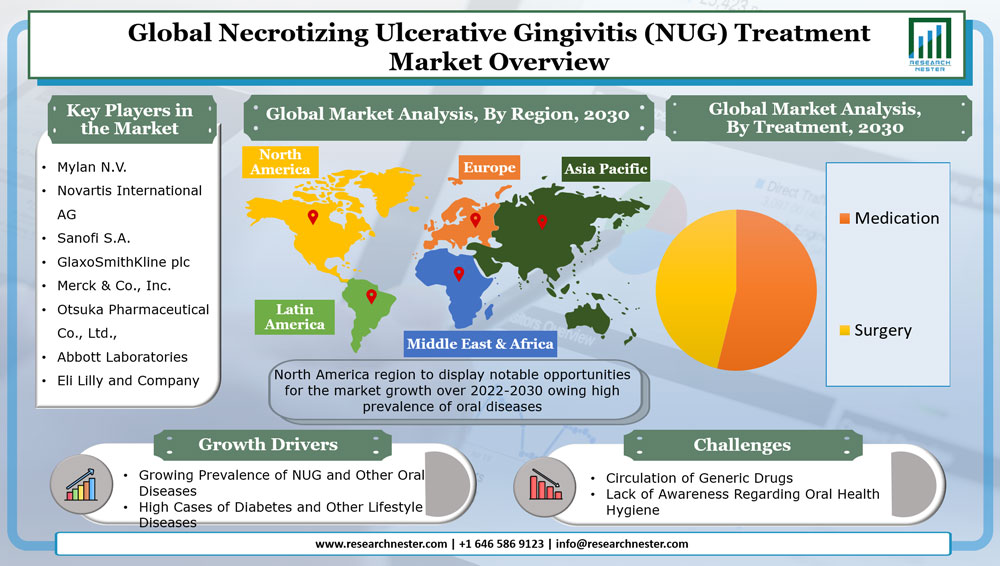 Consumption of tobacco is a major concern amongst governments of various countries, as well as the health authorities, as tobacco is one of the foremost causes of immature death, and also leads to various severe diseases. According to other report by the WHO, 7 million deaths are caused by direct tobacco consumption, in the form of smoking and chewing tobacco.  Various government initiatives to curb the consumption of tobacco, have successfully lowered the share of population consuming tobacco. According to the data by the WHO, 7 million tobacco users increased between 2010 to 2015, while almost 2 million users have decreased between 2018 and 2020. However, tobacco consumption has significantly risen amongst adolescents between the age of 13 to 15 years. This, as a result, is estimated to increase the prevalence of NUG amongst adolescents, which is projected to boost the market growth.  CLICK TO DOWNLOAD SAMPLE REPORT 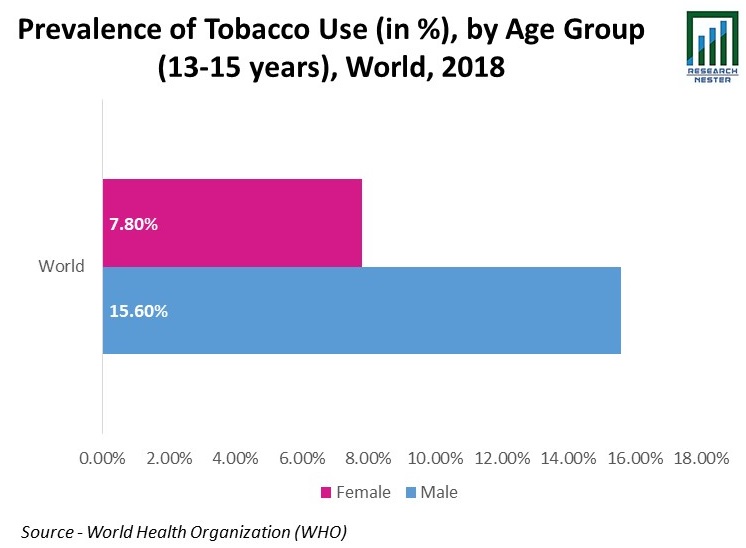 The market is segmented by treatment into medication, and surgery, out of which, the medication segment is anticipated to hold the largest share in the global necrotizing ulcerative gingivitis (NUG) treatment market over the forecast period on account of affordability of medication, and instant relief in symptoms. Moreover, majority cases are diagnosed at a stage where medications can be sufficient for complete treatment of NUG. As the disease is caused by infection, antiseptic, as well as, antibiotic drugs are effective against the symptoms.

On the basis of geographical analysis, the global necrotizing ulcerative gingivitis (NUG) treatment market is segmented into five major regions including North America, Europe, Asia Pacific, Latin America and Middle East & Africa region. The market in the North America region is anticipated to gain the largest market share throughout the forecast period owing to the increasing prevalence of oral diseases in the developed countries, including the US, backed by poor diet, and high cases of diabetes amongst the people. According to the data by the Center of Disease Control and Prevention (CDC), more than 1 in every 4 adults, i.e., around 26% of the American population suffers with untreated tooth decay. Moreover, growing health awareness amongst the people and government initiatives to ensure efficient healthcare facilities, are estimated to boost the market growth. Besides this, the rising focus on the advancements in the diagnosis and treatment of different necrotizing gingivostomatitis diseases is also expected to drive the market growth.

The market in Asia Pacific region is estimated to witness noteworthy growth over the forecast period on the back of improving public healthcare system, and growing awareness amongst people regarding oral hygiene. 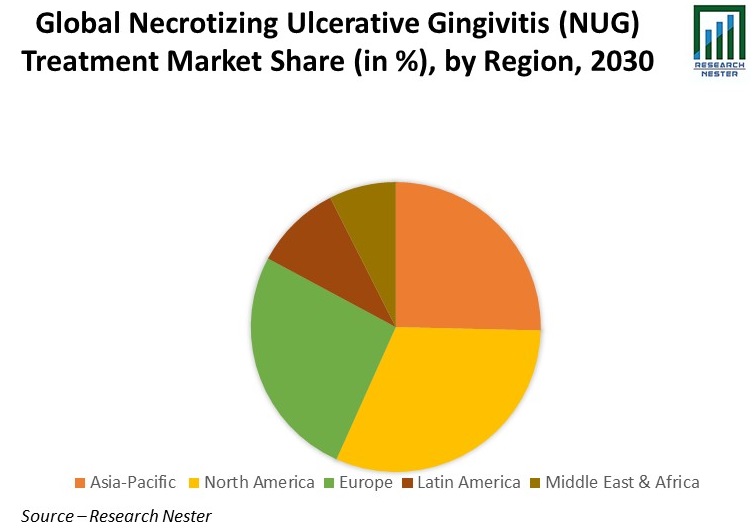 The global necrotizing ulcerative gingivitis (NUG) treatment market is further classified on the basis of region as follows:

What are the major factors driving the growth of the necrotizing ulcerative gingivitis (NUG) treatment market?

Growing incidences of oral diseases, and poor diet and dental hygiene are estimated to boost the market growth.

What would be the CAGR of necrotizing ulcerative gingivitis (NUG) treatment market over the forecast period?

What are the challenges affecting the necrotizing ulcerative gingivitis (NUG) treatment market growth?

The market in the North America region is estimated to gain most growth opportunities during the forecast period, owing to the high prevalence of oral diseases in the region.

Who are the major players dominating the necrotizing ulcerative gingivitis (NUG) treatment market?

What are the segments in the necrotizing ulcerative gingivitis (NUG) treatment market?

The market is segmented by treatment, distribution channel, and others.