A naval combat system offers a wide range of combat system solutions which can be adapted for every naval platform from combat boats and patrol boats, frigates and aircraft carriers, submarines and vessels for anti-piracy, security and surveillance. The market for these systems is buoyant and are looking for the opportunities for modernizing and upgrading their naval combat systems to keep up with the fast pace changing technology. These help to carry the weapons as well as navy personal safely whenever the need arises. These systems use powerful computer and radar technology to track and guide weapons to destroy enemy targets. The Aegis Combat System is an American integrated naval weapons system developed by the Missile and Surface Radar Division of RCA and is now produced by Lockheed Martin. Initially used by the United States Navy, Aegis is now used by the Japan Maritime Self-Defense Force, Spanish Navy, Royal Norwegian Navy, Republic of Korea Navy and Royal Australian Navy as well. More than 100 Aegis-equipped ships have been deployed. They are also a part of NATO's European missile defense system.

The naval combat system market is anticipated to record a CAGR of around 4% over the forecast period i.e. 2019-2027. The market is segmented by type, platform type and applications. By type, the C4ISR segment is anticipated to have high growth rate in revenue terms on account of integrated C4ISR system’s acceptance in the market. C4ISR includes combination of different technologies such as C2 systems for command and control, SDR, satellites, and other portable devices for communication. C4ISR systems are widely being adopted for maritime patrolling which is expected to increase during the forecast period.

The weapons segment is expected to expand during the forecast period attributing to the substantial procurement of anti-ship missile for defense and man-portable air defense systems by combat ships. By platform type, the surface based naval combat system is expected to grow significantly owing to its ability to offer abundant offensive and defensive capabilities for months together without requiring land bases during the forecast period. 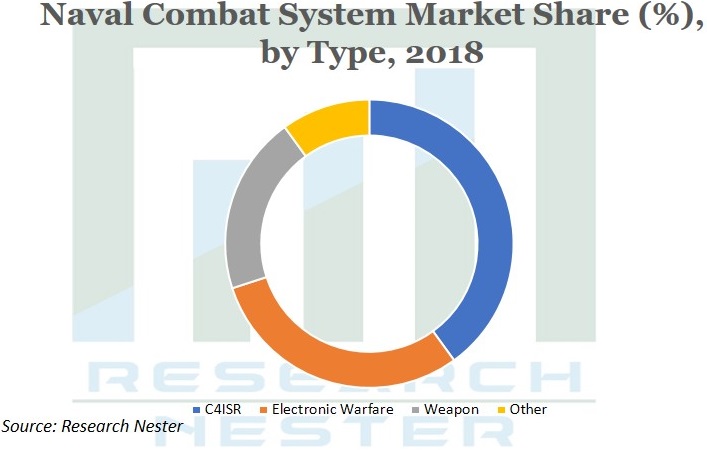 The unmanned underwater vehicles or unmanned drones provide the naval combat systems with the opportunities to undertake various operations such as combat search and rescue, electronic warfare, C4ISR, and communication transfer. The advanced naval combat system provides various function in underwater unmanned vehicles such as efficient and precise naval intelligence, surveillance, mine countermeasures (MCM) operations, monitoring systems, intelligence and reconnaissance (ISR), and anti-submarine warfare missions. Thereby, the increasing number of unmanned vehicles is expected to boost the growth of the naval combat systems.

Protects the life of naval personnel

The advanced functions of underwater unmanned vehicles help them in withstanding hazardous chemical and dangerous situations which further helps in protecting the life of a navy personal which is therefore, expected to boost the growth of the naval combat systems market.

Submarines are considered as one of the most integral part of the naval fleet and are required to be updated with time, therefore the number of submarines upgradation programs are taking place which are expected to propel the growth of the market.

International Boundary Waters Treaty Act and other intergovernmental regulations are expected to restrict the implementations of the warfare systems which is thereby expected to impede the growth of the naval combat system market.

The naval combat system market is further classified on the basis of region as follows: