Amid the COVID-19 pandemic, many countries across the world adopted lockdowns to flatten the curve of the infection. Most of the SONAR system companies had to close their manufacturing facilities owing to the outbreak of COVID-19. In the wake of the pandemic, the supply of essential components like transmitters, transducers and synchronizers got disrupted which resulted in slow production by many companies thereby reducing their overall revenue in different regions across the world.

SONAR system is a device which uses technique of sound navigation ranging for visualization of underwater object. There are various applications of SONAR that can be used in defense, commercial and scientific research sectors. Manufacturers have developed SONAR systems which operate at lower frequencies (below 5 kHz) that provides comparatively greater area coverage and improved performance. Global SONAR system accounted for a market value of USD 2,960.60 million in 2019 and is anticipated to grow up to USD 4,177.53 million by 2028, at a CAGR of 3.90% during the forecast period 2020-2028. Factors such as enhancements in the anti-submarine warfare techniques, advancements in digital signal processing which has enhanced the underwater SONAR signal processing and communication, and rising demand for sonobuoy in tactical defense operations are anticipated to drive the market growth of SONAR system market in the coming years. 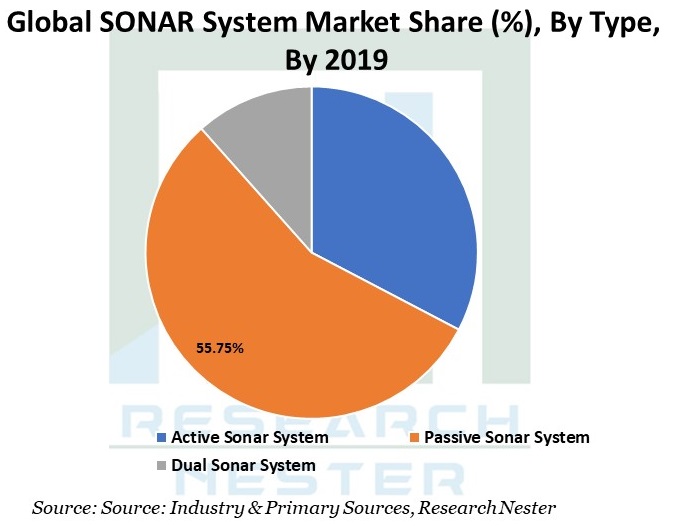 The global SONAR system market is segmented by installation into hull mounted SONAR, stern mounted SONAR, airborne SONAR, dipping SONAR, and others. Hull mounted SONAR accounted for the largest market share of 46.64% in 2019 and is expected to grow at a significant rate during the forecast period. These SONARs are used in various naval missions, including submarine detection, mine detection, and diver detection. Stern mounted SONAR is installed at the back of the ship. The placement of the system is essential so that maximum information can be obtained. Airborne SONAR is gaining popularity across the defense sector owing to the quick drop & pick-up of the SONAR system from the air and more accurate & reliable data collection.

The global SONAR system market is segmented by component into receiver, transmitter, hydrophone, beamforming processor, transducer, synchronizers, cables, and others. The synchronizers segment accounted for the largest market share of 26.70% in 2019 and is expected to grow at a significant rate in the coming years. The role of synchronizer is to give the overall coordinates and timing of the system. The application of synchronizers in SONAR system is to help pinpoint the location of ships and submarines. The receiver segment is designed to intercept and amplify the sound signals produced by the identified target object.

The global SONAR system market is segmented by application into defense, commercial, and scientific, out of which, defense segment accounted for the largest market share in 2019. Growing expenditure in the military is expected to boost the SONAR system market during the forecast period. U.S., China, India, Russia, and Korea are the top five countries that spend a massive amount of resources in their defense sector. The commercial application of SONAR system includes fisheries, object detection, and offshore activities by the oil & gas sector. Scientific application of SONAR system includes hydrography and object detection for research purposes. A large amount of research operation is performed by an unmanned underwater vehicle that uses SONAR system to get a clear underwater structure.

Growing Defense Operation Across the World

The demand for SONAR systems is increasing on account of growing advancements in defense operations across the world. Nowadays, most of the submarines are designed based on the Ohio-Class, reducing their vulnerability to passive SONARs. Furthermore, new anti-submarine technologies are increasing, which will reduce their reliance on noise generated by a target submarine.

The global offshore energy sector is growing at a robust pace and is anticipated to rise even more over the forecast period. The industry aims to provide an affordable and dependable source of energy across the world. Also, the quantity of fish produced at the global level is projected to grow as it is predominantly consumed as food worldwide. SONAR systems are one of the acoustic technologies that help researchers study the habitat of fishes.

Impact of SONAR on Marine Life

The increase in underwater surveillance systems such as submarines, SONARs, seismic air gun blasts, and others which are used for offshore energy exploration and underwater warfare is disrupting the life of marine creatures. These underwater warfare systems are negatively impacting marine life, and the whole aquatic life is attributed to vanish in the future.

What are the major factors driving the growth of the SONAR System market?

Growing defence operation across the world and developments in offshore energy sector and fisheries are some of the major factors driving the market growth.

What would be the CAGR of SONAR System market over the forecast period?

Which region will provide more business opportunities for growth of SONAR System market in future?

Who are the major players dominating the SONAR System market?

The increase in underwater surveillance systems such as submarines, SONARs, seismic air gun blasts, and others which are used for offshore energy exploration and underwater warfare is disrupting the life of marine creatures. This acts as a barrier to the