The global myositis treatment market is estimated to grow at a notable CAGR over the forecast period, i.e., 2022 – 2030. Myositis is a chronic condition of muscles, causing progressive inflammation in certain muscles, which can even lead to morbidity, complete loss of movement, and even death. The growth of the market can be attributed to the poor muscle health, prevalent globally due to lack of proper physical activities. Moreover, myositis is more common amongst the older population, or people with underlying musculoskeletal disorders. In turn, the growing prevalence of muscle-related diseases is estimated to boost the market growth. According to the data by the World Health Organization (WHO), 1.71 billion people globally suffer with some kind of musculoskeletal conditions. Moreover, the rising geriatric population across the globe is further projected to boost the market growth. According to the World Bank, 9.318% of the total global population aged above 65 years, in 2020. 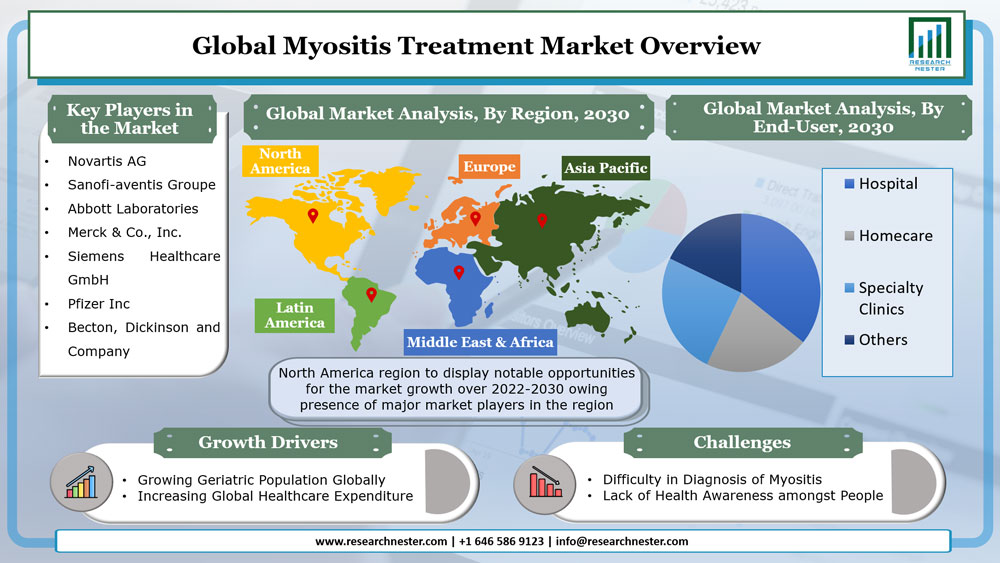 Furthermore, there is no cure for myositis, and treatments are basically aimed towards relieving the symptoms. The symptoms include skin rashes, difficulty in walking or rising from seated position, tripping and loss of balance, weakened hand grip, difficulty swallowing, and muscle weakness and pain. As a result, there is a surge in demand for developing an effective treatment method for curing myositis. In addition to this, the growing investment in the R&D activities is estimated to boost the market growth.  According to the World Bank data, 2.204% of the global GDP was spent for R&D activities in 2018. 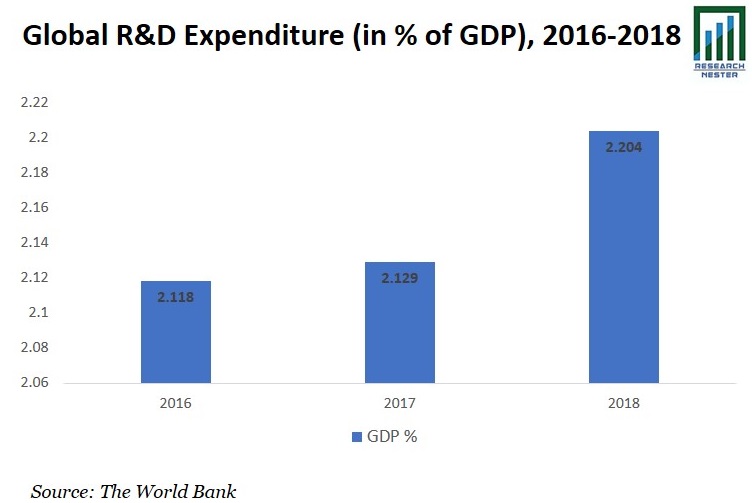 On the basis of geographical analysis, the global myositis treatment market is segmented into five major regions including North America, Europe, Asia Pacific, Latin America and Middle East & Africa region. The market in Asia Pacific region is estimated to witness noteworthy growth over the forecast period on the back of high prevalence of musculoskeletal diseases in the region, backed by high geriatric population. According to a report by the WHO, more than 369 million people suffer from muscle-related diseases in the South-East Asia region. The market in the North America region is anticipated to gain the largest market share throughout the forecast period owing to the high health awareness amongst the population, along with easy access of quality healthcare in the developed nations. 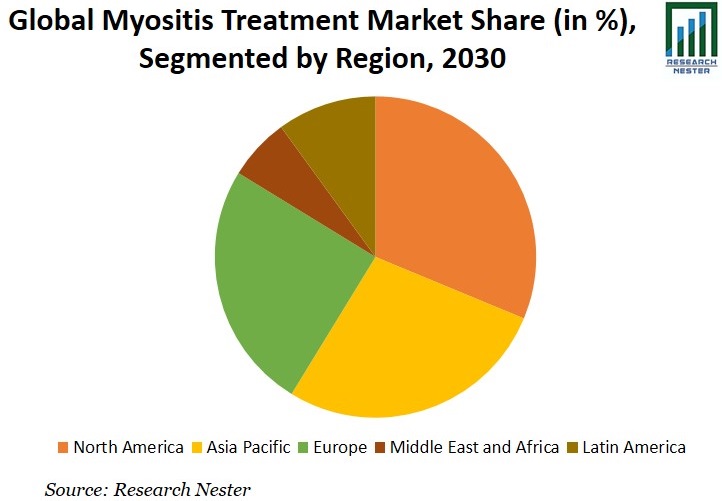 The global myositis treatment market is further classified on the basis of region as follows:

Our in-depth analysis of the global myositis treatment market includes the following segments:

What are the major factors driving the growth of the myositis treatment market?

Growing geriatric population and increasing cases of myositis amongst the older population are estimated to boost the market growth.

What would be the CAGR of myositis treatment market over the forecast period?

Which region will provide more business opportunities for growth of myositis treatment market in future?

The North America region is estimated to gain the largest market share owing to the high investment in R&D activities, and presence of major market players in the region.

Who are the major players dominating the myositis treatment market?

What are the segments in the myositis treatment market?

The market is segmented by type, treatment, end-user, and by region.

Which segment captures the largest market size in type segment in the myositis treatment market?

The inclusion-body myositis segment is anticipated to hold largest market size over the forecast period and display significant growth opportunities.

The complicated and difficult diagnosis of myositis is estimated to hamper the market growth.