The MRI contrast agents market is estimated to grow with a CAGR of ~3% during the forecast period, i.e., 2022-2030. The increasing number of MRI examination for diagnosis of various disorders globally, along with the growing advancements in the diagnostic technologies are expected to fuel the development of this market in the coming years. The growth of the market can also be attributed to factors such as increasing ageing population and rising middle-class population in emerging economies on a global level. Furthermore, with the rising prevalence of cancer cases across the developing and developed economies of the world such as United States, Australia, New Zealand, and others, it has become important to offer diagnostic procedures that is assisting the patients to get a diagnosis at the earlier stages. Cancer is currently the second leading cause of death worldwide. According to a Globocan report by the WHO, global cancer burden is estimated to have risen to 19.3 million cases and 10 million cancer-related deaths in 2020. As a result, it has increased the number of MRI examinations, which is further expected to increase the demand for MRI contrast agents in the market. Additionally, growing implementation of regulatory scenario in developed countries for using advanced diagnostic devices is expected to further the demand for MRI contrast agents in the near future. 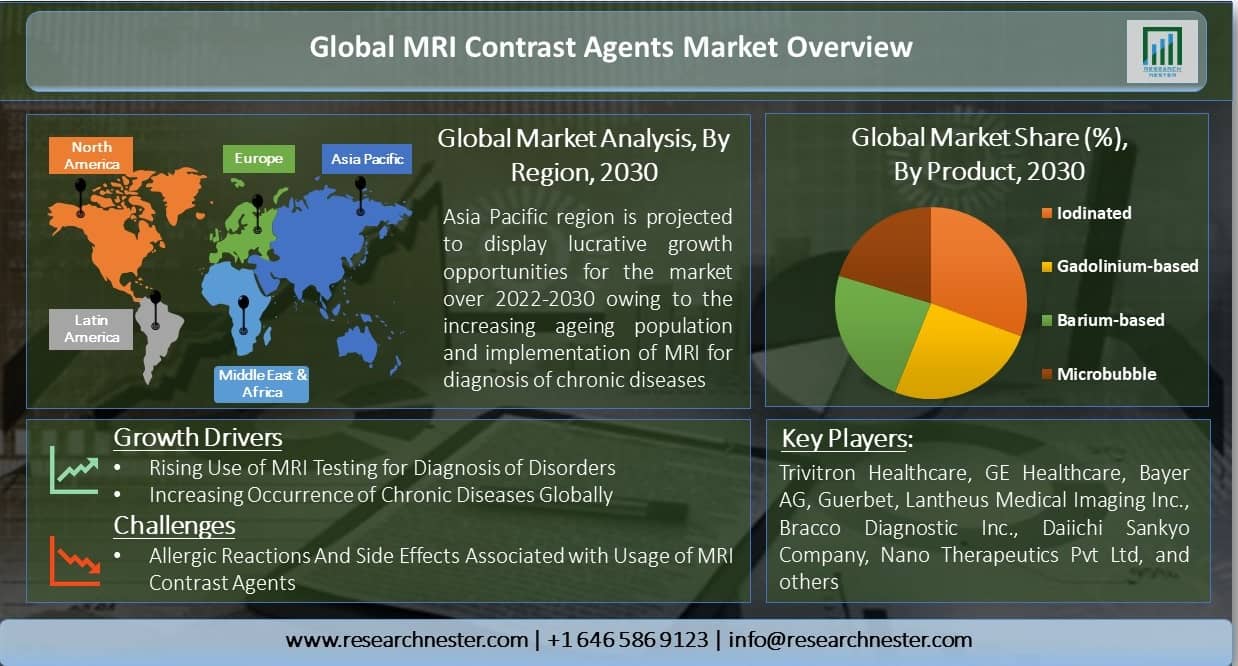 The market is segmented based on product into iodinated, gadolinium-based, barium-based, and microbubble, out of which, the iodinated segment is anticipated to grab the largest share by the end of 2030 as it provides remarkable low toxicity and radio-opacity than the other types of contrast agents. Moreover, the microbubble is the fastest growing segment on the back of its improved visualization of blood flow without using radiation. CLICK TO DOWNLOAD SAMPLE REPORT

On the basis of indication, the neurological segment in the market is expected to hold a major share by recording a significant CAGR over the forecast period. The growth of the segment can be attributed to the fact that the rising requirement for MRI contrast agents for the diagnosis of CNS for neurological disorders, as they provide improved and better images of neural structures as compared to other diagnostic devices such as CT scan.

On the basis of geographical analysis, the market is segmented into North America, Latin America, Europe, Asia Pacific and the Middle East & Africa regions. The market in the Asia Pacific is predicted to grow at the highest CAGR over the forecast period owing to the increasing necessity for advanced diagnosis method to detect various disease indications such as neurological disorders, cancer, cardiovascular diseases, and others. Furthermore, the market in North America is evaluated to occupy the largest share in terms of revenue in the future, on the back of the growing prevalence of chronic disorders in the region. According to the report published by the National Cancer Institute, in 2020, 1.8 million new cancer cases were registered in the United States. Such increasing number of cancer cases in the United States has significantly increased the demand for MRI examination in this region, which in turn is expected to drive the demand for MRI contrast agents in North American countries. 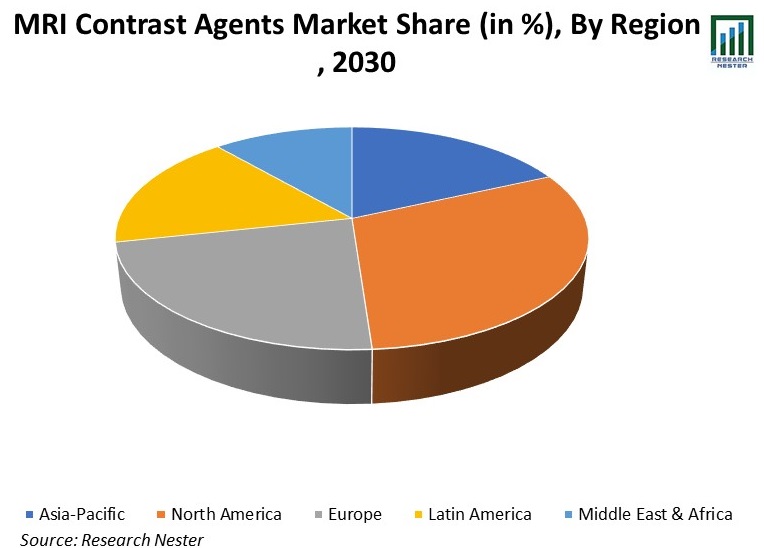 The global MRI contrast agents market is further classified on the basis of region as follows:

1) What are the major factors driving the growth of the MRI contrast agents market?

2) What would be the CAGR of MRI contrast agents market over the forecast period?

3) What are the challenges affecting the MRI contrast agents market growth?

4) Which region will provide more business opportunities for growth of MRI contrast agents market in future?

Ans: The market in Asia Pacific region will provide ample growth opportunities owing to the increasing rate of drug consumption.

5) Who are the major players dominating the MRI contrast agents market?

7) What are the segments in the MRI contrast agents market?

Ans: The market is segmented by product, application, end-user, and by region.

8) Which segment under the product segment captures the largest market size in the MRI contrast agents market?

Ans: With respect to product, the iodinated segment is anticipated to hold the largest market share owing to the low toxicity and radio-opacity than the other types of contrast agents.